Five decades of Coppelia, the cathedral of Cuban ice cream 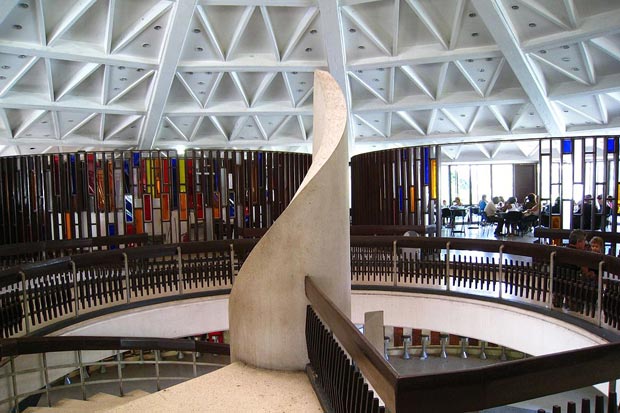 A project initiated by Fidel, in which Celia Sánchez Manduley actively participated. Troubadours and poets frequented this ice cream parlor with capacity for one thousand visitors

The iconic Coppelia ice cream parlor turned fifty on June 4, a truly modern symbol of Havana, a Wonder City of the World. The site is named after the mythical character of the ballet of the same name, so often danced by Cuban prima ballerina assoluta Alicia Alonso.

The parlor is nestled in the densely populated area of La Rampa, in El Vedado. From 1886, the Reina Mercedes Hospital stood here, which remained active until 1954, when it was demolished with the intention of building another hospital. Given the location in the heart of the city, it was finally decided to build a 50-floor skyscraper on the plot, but the project never materialized.

Instead, the National Institute for the Tourist Industry (INIT) Park was erected, a beautiful pavilion promoting the leisure industry. Small mountains were reproduced together with an artificial lake, floating stage, water fountains, a cafe, bar and restaurant with capacity for 500 people.

After a year of successful operations, the INIT Park was deactivated and in its place, taking advantage of some of its facilities, the Nocturnal Recreational Center was established.

However, in 1966 the construction of the gigantic ice cream parlor was devised.

An international event was due to be held in the emblematic Hotel Habana Libre (located about 100 meters away) that year, and at the initiative of Comandante en Jefe Fidel Castro Ruz, with the efforts and dedication of his close collaborator Celia Sánchez Manduley, it was decided to convert the recreational area into something more useful. The idea of a huge ice cream parlor with capacity for a thousand visitors arose.

The work was entrusted to architect Mario Girona Fernández (Manzanillo, January 1924 - August 26, 2008, Havana), who was assisted by architects Rita María Grau and Candelario Ajuria. The structural design was undertaken by engineers Maximiliano Isoba and Gonzalo Paz.

According to various publications, the designs of Girona Fernández reflect the main features of Cuban architecture in the first four decades of the revolutionary period and constituted, among other aspects, the merits that earned him the first National Architecture Award (1996), and three years later, the National Culture Distinction. Coppelia is among his leading works.

Girona Fernández is also remembered for his role in the construction of the Tribunal de Cuentas (Court of Auditors), now the Interior Ministry, the National Zoo, as well as airports and hotels such as the Capri. In an interview some years ago, he referred to the Coppelia project:

“The construction demands were huge; works were undertaken 24 hours a day for six months straight. The prefabricated system was used to achieve the repetition of structural elements such as beams and roofing elements. Finally it was concluded on schedule.”

The construction resulted in a work of art in the form of a spider. The influence of Italian modernism and architects such as Pier Luigi Nervi (Italy), Félix Candela Outeriño (of Spanish and Mexican nationality) and Oscar Niemeyer (Brazil) is notable throughout the site, each of whom exploited the opportunity to abandon the rectangular shapes of large buildings and take advantage of the plasticity of reinforced concrete.

Coppelia is considered one of the most beautiful buildings in Cuba. It is surrounded by gardens with large banyan trees that provide shade for the parlor’s outdoor areas. Curved paths lead to the main pavilion, where the only indoor area is located.

“And, as things turned out, there was not even an opening ceremony. It opened in June, 1966, and began selling ice cream (he notes that there were 26 exquisite flavors available, some as exotic as coconut, mango and guava). The curious visited, the concept was well received, it filled up and never ceased to be packed with customers,” the distinguished architect explained.

Coppelia is iconic for several generations of Cubans. It is almost impossible to come across a Havana resident who doesn’t have an anecdote or a pleasant memory related to this monumental ice cream parlor to share.

Known as the “cathedral” of ice cream, Coppelia is one of the largest ice cream parlors in the world, covering an entire city block between 23rd and 21st streets and L and K. Over 1,000 visitors can be accommodated at a time. The Coppelia brand of ice cream is also a reference for both locals and visitors. The site is currently undergoing an extensive repair in three stages to restore it to its original splendor.

THE BEGINNINGS OF THE NUEVA TROVA MOVEMENT

Many are unaware that the New Trova movement began, to some extent, in Coppelia, with the daily presence of singer-songwriter Silvio Rodríguez Domínguez and his poet friends Wicky Nogueras, Jorge Fuentes, Víctor Casaus, and Guillermo Rodríguez Rivera.

“The story of when I used to hang out at Coppelia is extremely long,” Silvio told me in the Casa de las Americas, “Maybe one day I’ll write and publish it. It’s hard to tell in just a few words. I worked in television; it was a time when I only drank milk and ate ice cream, we savored endless chocolate and biscuit iced drinks, exchanged poems, stories, songs. It was almost always the same faces.

“Thus one night César Vallejo came and sat down and we started sharing with him (as Silvio Rodríguez figuratively referred to reading the poems of the Peruvian bard in the magazine Revolución y Cultura). One day someone said: Gentlemen! The first of us to go to Paris must visit Vallejo's grave.”

One cold and rainy Sunday in March, 1979, Silvio managed to visit the tomb of Vallejo at the cemetery of Montrouge, which resembled that of Colon in Havana, having been directed by Argentine writer, translator and intellectual Julio Cortázar (Brussels, August 26, 1914 - Paris, February 12, 1984).

“I had written and excitedly laid a text with the signatures of my friends and I thought about how a man, even after death, could still be so present in life.” Several photographs left record of the event.

Peruvian poet Vallejo (Santiago de Chuco, 1892 - Paris, 1938) was one of the great figures of twentieth century Latin American lyrical poetry. In the development of post-modernist poetry, his work has the same importance as that of Chilean Pablo Neruda or Mexican Octavio Paz, both Nobel Prize for Literature winners, in 1971 and 1990, respectively.

Also in the zone where Coppelia is located, the late star, Cuban singer and composer Juan Formell made preparations for the album of his songs composed for legendary Cuban bolero singer Elena Burke (February 28, 1928, Havana - June 9, 2002, Havana), in the Cabaret Caribe of the Hotel Habana Libre.

In addition, Los Van Van band, led by maestro Formell, first performed close to Coppelia. Many of the salsa greats of the 1990s met in the different areas of the parlor to dream up and discuss their projects.

The site also served as one of the scenes of the famous Cuban film Strawberry and Chocolate (1993), based on the short story The Wolf, the Forest and the New Man by Cuban writer Senel Paz, who also wrote the screenplay.

The film, nominated for the Oscar for Best Foreign Language Film by the Academy of Motion Picture Arts and Sciences, was directed by Tomás Gutiérrez Alea (December 11, 1928, Havana - April 16, 1996, Havana), one of the leading filmmakers in the history of Cuban and Latin American cinema, together with Juan Carlos Tabío.

Cuban troubadour Frank Delgado wrote the song “Coppelia”, some of the verses of which go as follows: Coppelia, is an oft-mentioned ice cream parlor/ ... Girona did not know what he was doing/ when in its architecture he mixed reality and geometry/ It was the home of the hippies who came to hear/ ... the reasoning of the Beatles/ and hosted Vallejo…