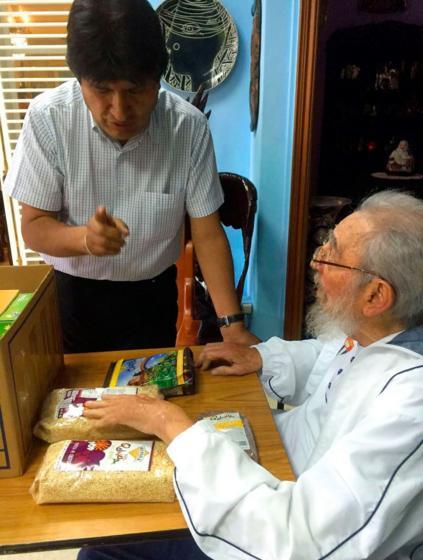 The Cuban leader received the Bolivian president to discuss politics, social issues and even sports.

Bolivian President Evo Morales visited the leader of the Cuban Revolution Fidel Castro in Havana, Cuba, on Monday and, according to Morales, Castro is lucid and has a great concern for the world supply of food.

Morales arrived in Cuba for Castro’s 90th birthday celebration on Saturday and used Twitter to congratulate Castro on his "enviable and unattainable life."

The Bolivian president stayed on the island until Tuesday for a personal meeting with the leader. Morales posted photos of the meeting on Twitter, where the former Cuban president is seen at his home wearing his traditional tracksuit.

Evo and Fidel followed some of the ongoing competitions at the Olympics and were able to see one of the Cuban athletes win a gold medal.

"At the time of the visit, Cuban Mijail Lopez won gold medal in Greco-Roman wrestling. We celebrated with Fidel."

Morales gave Castro several packages of quinoa and Bolivian coffee as a gift.

Morales left for to the Dominican Republic to attend the inauguration of the second presidential term of Danilo Medina, who was re-elected with 62 percent of the popular vote.