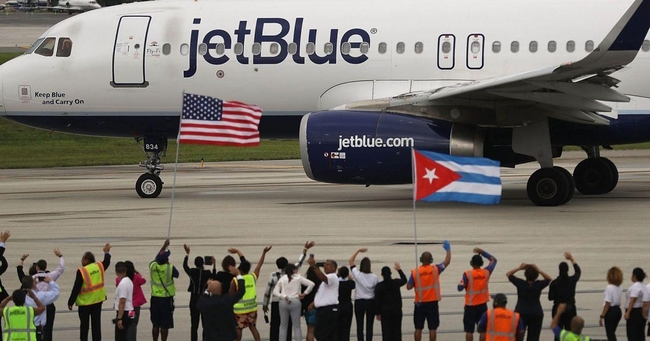 The first commercial flight to Cuba from the United States for over half a century took off from Florida on Wednesday, the latest manifestation of the thaw in relations between the countries.

Aboard JetBlue Flight 387 were the US Transportation Secretary, Anthony Foxx, as well as the CEO of the airline, Robin Hayes, and a crew of Cuban-Americans. It left Fort Lauderdale for a 72-minute journey to the Cuban city of Santa Clara a few minutes late on Wednesday morning.

Several other US carriers, including American Airlines and United Airlines, will soon join JetBlue in the rush to revive tourism links with Cuba, putting an end to a virtual freeze that dates back to the height of the Cold War. Other US cities will also boast direct flights there soon. In short order, the US is slated to offer as many as 300 direct flights a week to the Caribbean island.

The economic potential of the change both for the Cuban government, which is heavily depended on tourism for foreign currency, and for the American travel industry is significant, but it won’t be realized all at once.

The first batch of licenses issued to the US carriers offered provincial destinations in Cuba only, and not Havana. Cuba’s ability to absorb a new tourist tsunami is limited; already residents of Havana struggle to find beer to buy because it is all going down the gullets of foreigners.

Moreover, it is not as if any American tourist can now simply book a ticket and go. In spite of President Barack Obama’s admonitions to the US Congress to lift the embargo on Cuba first imposed in 1962, it for now remains in place.

That means those buying tickets must sign an affidavit online confirming they belong to at least one of twelve categories granting them an exemption from the travel ban still implied in the embargo. That includes those on so-called “people-to-people“ cultural and educational visits. Cuban Americans visiting family members on the island also get a waiver to fly.

Yet the symbolic significance of Wednesday’s first flight was real. “Seeing the American airlines landing routinely around the island will drive a sense of openness, integration and normality. That has a huge psychological impact,” said Richard Feinberg, author of the new book “Open for Business: Building the New Cuban Economy.”

While US Secretary of State, John Kerry, said on Twitter that the JetBlue departure marked the first commercial flight to Cuba since 1961, some believe the last one in fact occurred in 1962 when the Cuban Missile Crisis caused Havana to start turning all US arrivals away.

Agreeing on direct flights to Havana has taken longer in part because of concerns that the Jose Marti International Airport about thirty minutes from the city does not have the capacity for a sudden new influx of direct flights. Its one, tatty international terminal is already tied up most days dealing with regular and charter arrivals from Europe, including London.

But an announcement on direct Havana flights could come as early as Wednesday with departures out of New York, Atlanta, Los Angeles and Houston. Other US cities expecting to inaugurate flights to somewhere in Cuba also include Philadelphia, Miami and Minneapolis.

While the numbers of charter flights to Cuba have exploded since Mr Obama eased travel restrictions, they typically charge high prices for seats and rarely allow travelers to book tickets online. Most of those operators are now expected to go out of business.

Even if the US embargo is eventually lifted, Cuba will struggle to absorb any major onslaught of visitors from the United States because of its still rudimentary tourism infrastructure. Not only is the airport in Havana of limited size, but the city itself still has scant hotel options, although Airbnb has taken a lead in opening up private residences to visitors.