A tribute to Eddy Brown 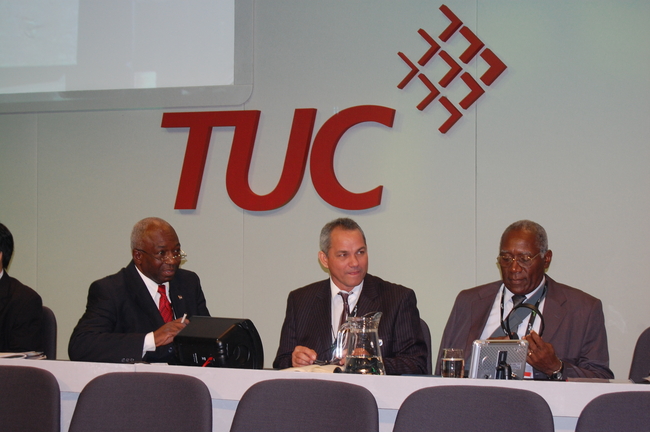 CSC was sad to learn of the death of Eddy Brown in Cuba in July. Earl Eddison Brown was, until quite recently, the leading English/Spanish interpreter working in the International Relations Department of the Cuban CTC (union federation). Well-known to many CSC activists, above all in British trade unions, he visited the UK on a number of occasions with CTC General Secretary Pedro Ross, including Pedro Ross’s historic addresses to the TUC Congress in 2004 and 2009, and more recently on a private visit to friends in Unison. And he worked with many British union delegations to Cuba, including the Unison groups working to re-equip the ambulance service in Havana. During a vital period, Eddy was at the heart of an outreach effort by the CTC which produced great results, not least in the influential trade union work for the Miami Five.

Eddy had initially learned his English from his Barbadian father, and went on to teach English at the national trade union college in Havana before Pedro Ross recruited him to the CTC’s National Office. He was also an ex-baseball player for Havana’s Metropolitanos team. He had a big and friendly personality and was a great help to visiting trade unionists and researchers, not just with his fluent language skills, but also with his enthusiasm and capacity to make links and open doors. As a diabetic, he was always grateful for dietary help from British comrades, which probably made him Cuba’s leading consumer of British supermarket artificial sweeteners!

He was very proud of the role of interpreters, whom he naturally considered were undervalued! On one of UN General Secretary Kofi Annan’s visits to Cuba, Eddy was chosen to be his interpreter. A photo of the two of them had pride of place in his tiny home in his beloved revolutionary municipality of Marianao. But he was more than an interpreter and facilitator. He was a tremendously knowledgeable revolutionary patriot, who took every opportunity to engender solidarity with his homeland and engage visitors in debate and learning. To be honest he was sometimes more knowledgeable than the people he was interpreting for, and would sometimes diplomatically improve their responses!

In recent years, he worked with visiting US student groups in the Martin Luther King Center in Marianao: lucky them! When I last met him, shortly before he died following three devastating strokes, he was enthusing about a new group of interpreters he was working with, and interrogating me, as usual, about British and Labour politics. He seemed as energetic and indefatigable as ever, and it came as a great shock to learn of his death. We have lost a great friend and colleague, one who loved the British solidarity movement and especially its trade union supporters. Our sincere condolences go to his family, friends and colleagues.