British trade unions in solidarity with Cuba at TUC Congress 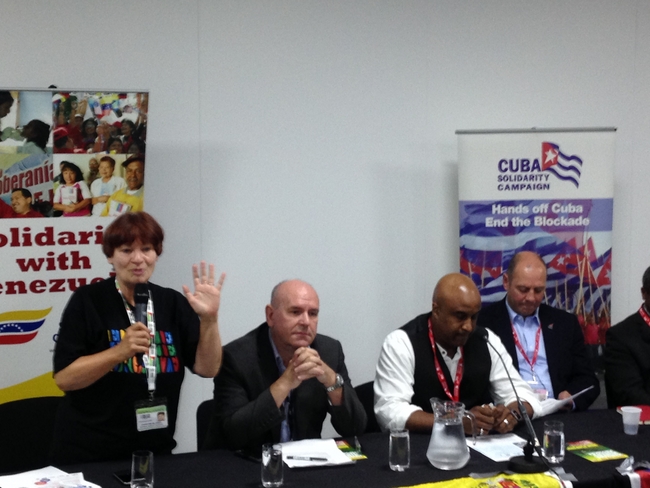 Over 80 delegates packed into a standing-room only Cuba Solidarity Campaign fringe meeting at the 2016 TUC Congress in Brighton. The fringe meeting was one of the best attended at the Congress, demonstrating the excellent international solidarity with Cuba from across the British trade union movement at this crucial time.

Delegates heard from a range of speakers on how, despite the re-establishment of diplomatic relations between the US and Cuba, the US blockade remains in place.

Christine Blower, NUT International Secretary, spoke of Cuba’s “incredible achievements for humanity, despite the blockade. One can only imagine how much more Cuba could achieve without the huge obstacle of the blockade in place”.

She gave examples of how Cuba is a world-leader on education, including spending the highest percentage of GDP in the world on education, at 13 percent, compared to the 6 percent in Britain.

Christine also spoke of her pride in the solidarity with Cuba that the NUT has displayed, including supporting a programme of teaching English to Cuban teachers in Edinburgh, who returned to Cuba with the skills to teach English to Cuban medics. Many of these medics then went on to fight the Ebola outbreak in West Africa, where Cuba sent the largest contingent of health workers, she said.

Mick Whelan, ASLEF General Secretary, spoke of how the present situation of improving relations between the United States and Cuba is a victory for international solidarity.

"The blockade was supposed to isolate Cuba - but solidarity meant the US became isolated", he said. The ASLEF General Secretary spoke of US threats beyond the blockade, including Obama’s intention to fund and support breakaway unions on the island. “Solidarity is needed with Cuban unions in light of this threat”, he stated.

Steve Turner, Unite Assistant General Secretary, highlighted the recent anniversary of the US-backed coup in Allende’s Chile in 1973 and drew recent parallels with US intervention in Latin America and its continuing regime change activities.

He paid tribute to the role of Unite and Tony Woodley in the struggle to free the Miami Five and spoke of his pride of attending May Day in Cuba. "It’s impossible to not be moved by the spectacle of a million Cubans marching in unity, it makes you so proud to be there in solidarity", he said.

The Unite AGS gave examples of how the extraterritorial blockade impacts British trade and interests, including the $140,000 fine of the WATG Holdings for designing a Cuban hotel and the Co-operative Bank closing the accounts of CSC due to blockade legislation.

Jorge Luis Garcia, Cuban Embassy Political Counsellor, sent Her Excellency Teresita Vicente’s greetings to the TUC Congress. “Relations are a long way from being normalised”, he said. “The blockade is still in place and Guantanamo Bay is still being illegally occupied. We need your continued solidarity”, Garcia stressed.

Rob gave an update of the changes since December 17 2014, including direct flights, postal services and Obama’s historic visit. “But unfortunately, nothing has really changed with the blockade” he said.

“In fact, under Obama's presidency there have been more fines on international companies and banks for trading with Cuba due to blockade legislation since its introduction, with 47 fines on US and foreign entities at a value of over $14.4billion.”

Roger McKenzie, UNISON AGS, chaired the meeting. “I’m an organiser so after these meetings I always think, ‘How can we organise to build solidarity with Cuba?’ I can tell you how; go into your workplace, your communities, spread the word of Cuba’s achievements despite the ongoing blockade, and affiliate your branches to CSC to help end the US blockade once and for all”, he said.