Peace in Colombia: A farewell to arms 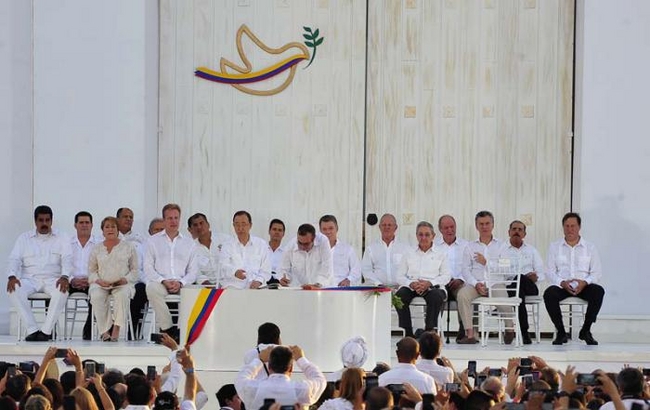 CARTAGENA DE INDIAS, Colombia.— "Today the bets are on peace," many Colombians commented to the Cuban press yesterday, September 26, during a day when emotions ran high in the streets and neighborhoods of this city. The moment is one of the most transcendental our region has experienced in recent years.

Colombia's embrace of peace was celebrated with a liturgy which began shortly before noon at San Pedro Claver Cathedral located in Cartagena's central historic district, with Monsignor Jorge Enrique Jiménez Carvajal, archbishop of Cartagena saying, "Welcome to this prayer we are making, trusting in God, for Colombia."

In attendance was Army General Raúl Castro Ruz, President of Cuba's Councils of State and Ministers, to accompany and share this moment of love and hope with the Colombian people, along with other heads of state, representatives of international organisations, foreign ministers and guests.

During the hour-long religious ceremony, officiated by Vatican Secretary of State Cardinal Pietro Parolin, offered were prayers for Colombia; for harmony among the Colombian people; for the entire homeland - with the desire to unite the country's different religions in an appeal for reconciliation and unity.

Cardinal Parolin delivered words of support from the Pope, who has closely followed the peace process over the last few years, and prayed for "light for the road ahead and the decisions Colombians must make."

Likewise, President Juan Manuel Santos asked for God's wisdom to make Colombia "a single family, in which no one feels excluded."

And as a sign of peace and reconciliation, all present greeted one another, regardless of creed or nationality, to conclude the moving ceremony.

With the afternoon drawing to a close, the heads of state who came to witness the historic moment made their entrance into the San Francisco Espanade, located in the city's Convention Center, all led to their seats by children whose future depends on the agreement.

With them was Raúl who occupied a spot among those presiding the ceremony, which marked the beginning of a new stage that will require the support and willpower of all Colombians.

More than 2,500 invitees clapped their hands and waved handkerchiefs; the plaza became all light, not only because of the bright white color that predominated, but from the faces of those present, full of emotion and hope for a future without violence - a longing felt for so many years.

The Final Accord rested on the table, at its side the "balígrafo" with which it would be signed - a pen crafted from bullets, as a symbol of the transition from war to education, to the future.

First, in the name of the Revolutionary Armed Forces of Colombia-People's Army (FARC-EP), the agreement was signed by Rodrigo Londoño, alias Timoleón Jiménez or Comandante Timochenko. In the press room, the first "Bravo!" was heard, among the long list of expressions of support heard throughout the day.

President Juan Manuel Santos then signed, and in a simple, meaningful gesture presented Londoño with a pin in the shape of dove which he was wearing on his own shirt, a symbol of the peace they had hoped for, for so long.

A strong handshake sealed the accord, an agreement that had already been written, which will now face the task of giving the country life.

We are convinced that with the unity of all Colombians, this peace will be lasting, said UN Secretary General Ban Ki-moon, who reaffirmed his support along the road which lies ahead.

He thanked Cuba and Norway, bulwarks serving as guarantors of the talks, as well as accompanying countries Venezuela and Chile, and concluded saying to Colombians, "Thanks to these accords, you can look to the future with optimism."

Speaking next was the FARC Commander in Chief, whose first words were dedicated to "the generous and blessed people, who never abandoned their hope of living in peace."

He emphasized that it was now up to the Colombian people to become the principal guarantors of the agreement, saying that putting an end to the long armed conflict was a debt owed to the children of the country.

He made special mention of Hugo Chávez and Venezuelan President Nicolás Maduro, continuator of his work, and likewise thanked Chile for the role that country played.

"In the name of the FARC-EP, I sincerely offer our remorse to the victims of the conflict for all the pain that we may have caused in this war," the Comandante said, before concluding his remarks.

Colombian President Juan Manuel Santos began his remarks with words for the conflict's victims, as well, who he said had been at the center of the peace process. He likewise thanked heads of state who had travelled to the city to join Colombia on this day.

A city, he said, that from now on will be remembered not only for its natural and architectural beauty, but also as "the city where Colombia's most important agreement was signed, the city of peace"

"I prefer an imperfect agreement that saves lives, rather than a perfect war that would continue to drown our families in pain," Santos continued, adding," As of today, there is one less war in the world."

In the plaza, the people laughed, applauded, cried, embraced, and amidst a marvelous tumult, the afternoon came to a gentle close. The moments lived this September day in Cartegena were no doubt moving, and once an or all, the door to peace have been opened, the guns have been silenced and the war is over.