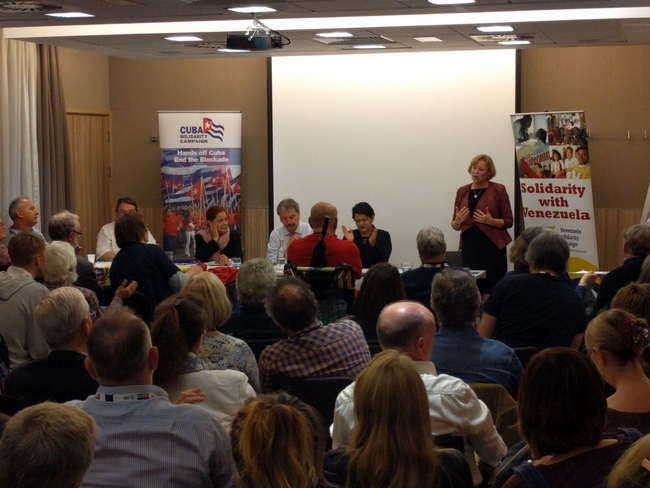 Adrian Weir, Deputy Chief of Staff of Unite, chaired the meeting and spoke of the progress that has been made since last year’s fringe, including Obama’s historic visit to Cuba in March. However, he highlighted the disappointment that “earlier this month Obama signed off the Trading with the Enemy Act against Cuba, continuing the blockade for another year.”

Teresita Vicente, Cuban Ambassador, urged solidarity at this crucial time for Cuba. “Don’t be fooled by the change in tactics - the goals are still the same”, she said. “Let’s show the imperialists that we stand together, in solidarity, against the US blockade and occupation of Guantanamo Bay”.

"We will continue with our internationalism, sending doctors all around the world, despite the difficulties of the blockade", she insisted, “demonstrating that another world really is possible”.

The Cuban Ambassador warned of the dangers of the next US President reversing the limited progress that has taken place under Obama and referred to Donald Trump’s recent comments where he claimed he would roll the clock back on Cuba and called for an increase the number of people detained at the infamous US detention camp on the US-occupied territory at Guantanamo Bay.

Baroness Smith celebrated the summer’s Miami Five Freedom Tour and paid tribute to the crucial role of parliamentarians in inviting the Miami Five to Britain which led to the successful visa victory against the then Home Secretary, Theresa May. “The visa victory and the Freedom Tour shows how campaigning works”, she said.

The All Party Parliamentary Group (APPG) on Cuba member gave an update on the US extraterritorial blockade, where fines are continuing against companies and banks that carry out business with Cuba.

“This impacts us too in Britain, including the closure of Cuba Solidarity Campaign’s Co-operative Bank account, due to US blockade policies”, she said.

The Leader of the Opposition in the House of Lords spoke about “Cuba’s inspirational achievements in health and education, all of which have been achieved despite the ongoing US blockade”.

Rocio Maneiro, Venezuelan Ambassador, spoke of how coup d’etat in Latin America are not a thing of the past, “they have just ‘modernised’”, she joked, referring to the 2009 coup in Honduras, this year’s parliamentary coup in Brazil and warned vigilance against US backed coups in Venezuela and Nicaragua. Tony Burke, Unite Assistant General Secretary, urged solidarity with Venezuela at this difficult time, with the decline in the value of oil coupled with relentless US intervention in the country, and made a rallying call that there must be “no more Pinochet’s in Latin America”.

The CSC fringe meeting was one of the best attended at recent Labour Party conferences, with many delegates, trade unionists and local activists in attendance.

“Next year you’ll need a bigger room!”, a delegate said at the fringe, with the crowds overflowing into the corridor to hear the crucial message that the US blockade of Cuba continues and international solidarity with Cuba must continue.

Catherine West MP, Shadow Foreign Minister, was in the audience at the fringe meeting and wrote on Twitter following the meeting; “so much progress but need final lifting of blockade.”

For pictures from the fringe meeting, go to the CSC Flickr Page