Raúl: Preparation for Hurricane Matthew essential at this stage 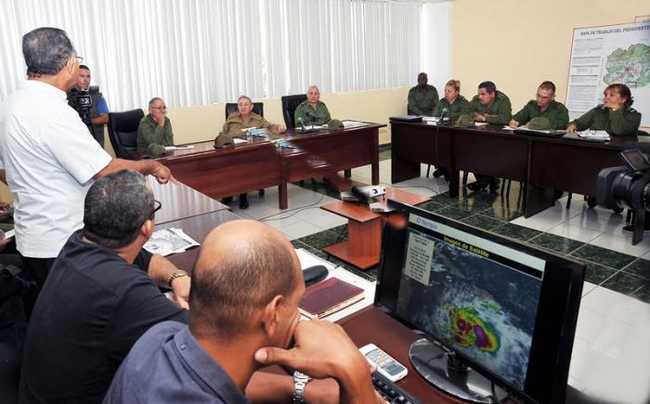 Accompanied by Army Corps General Ramón Espinosa Martín, deputy minister of the Revolutionary Armed Forces, the President participated in a meeting of the Provincial Civil Defense Council chaired by its president, Denny Legrá Azaharez, who explained that a series of measures have been taken, in accordance with plans for the alert stage of disaster preparedness, focused on protecting the population and minimising economic losses.

He reported that low lying areas had been toured to evaluate the risks of flooding and storm surges.

President Raúl Castro asked about plans to keep the population well informed, recalling that the province has not faced such a situation previously, and many may not be aware of the magnitude and danger of such storms. He emphasised the importance of expanding media coverage during this stage, and preparing speaker systems in public areas, as the hurricane approaches, to share information and instructions in a timely fashion if electrical service is affected. The President likewise stressed the need to emphasise the importance of complying with Civil Defense instructions.

Evacuation plans were also discussed during the meeting, with Civil Defense authorities estimating that a total of 179,000 persons may need to leave their homes given the danger of landslides and flooding.

The Cuban President also visited the Guantánamo military regional command, and commented there, "Now the task is to prepare ourselves, to later assume reconstruction."

He later visited the Border Brigade Chiefs of Staff where Colonel Erasmo Méndez Fernández, outlined the main risks being addressed and explained measures taken to evacuate personnel, and move weapons and equipment.

At the same time, two work groups including the ministers of Transport; Energy and Mining; Construction; Communications; Agriculture; Domestic Commerce, as well as the president of the National Water Resources Institute and the deputy minister of Public Health, visited provincial Civil Defense Councils in Granma and Guantánamo to direct and support efforts underway.