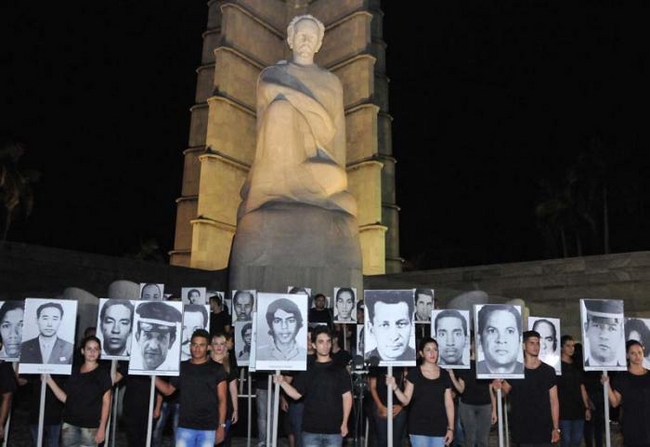 A gathering to honour the victims of the 1976 bombing of a Cuban airliner mid-flight off the coast of Barbados was held yesterday evening, October 5, at Havana's José Martí Memorial, with families of the martyrs in attendance

Hundreds of students, athletes, and workers gathered yesterday evening, October 5, to honour the thousands of victims of terrorist acts against Cuba over the last 50 years.

The event took place at Havana's José Martí Memorial, on the eve of the anniversary of the 1976 bombing of a Cuban airliner mid-flight off the coast of Barbados, with families of the martyrs in attendance.

"No one can make us forget the past that is part of our history. We demand justice and an end to the impunity that this crime has enjoyed for these 40 years," said Thalía Gattorno Espinosa, grand-daughter of Miguel Espinosa, co-pilot of CU 455, who died along with the 73 passengers aboard the flight.

"Every time a call has been made for a vigil, I sign up as a volunteer, because showing respect for the victims of terrorism is also preserving memory," Frank Javier Pérez Menéndez, a student at the Higher Institute of International Relations, told Granma.