The small print of Obama’s presidential policy directive on Cuba 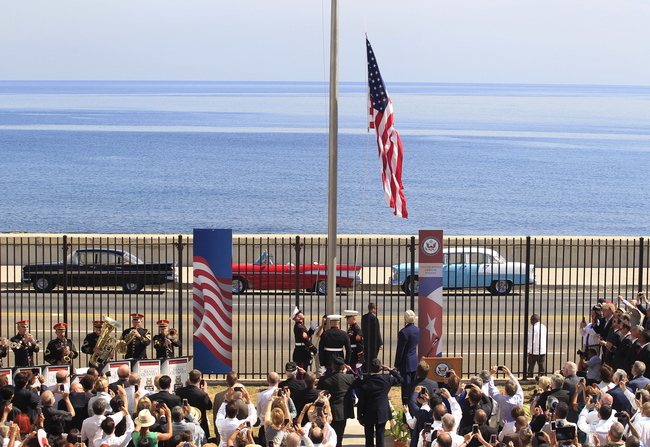 The U.S. President stated that the document represents a “comprehensive and whole-of-government approach” and aims to make the transformations of the last two years irreversible.

He added that the directive “promotes transparency by being clear about our policy and intentions.”

Meanwhile, his National Security Adviser, Susan E. Rice, went even further in recognising that there were “secret plans for Cuba” in the past, but that the U.S. had now decided to make public the executive directives concerning relations with the island.

As the saying goes, the devil is in the detail. Through technocratic language and the typical neologisms of diplomacy, the text conceals many of the contradictions that remain between the two neighbours.

Since the announcements of December 17, 2014, U.S. authorities have said on several occasions, and in different ways, that they have changed their methods but not their objectives.

“We recognise Cuba’s sovereignty and self-determination,” the directive signed by Obama notes, after describing the actions of the last half century as “an outdated policy that had failed to advance U.S. interests.”

Another paragraph of the document reads, “we are not seeking to impose regime change on Cuba; we are, instead, promoting values that we support around the world while respecting that it is up to the Cuban people to make their own choices about their future.”

However, the speech by Rice at the Woodrow Wilson Centre in Washington, and the subsequent exchange with the press, made clear in both tone and content that the aspirations to promote changes in the political, economic and social order chosen by the Cuban people in 1959 have not disappeared.

The influential National Security Adviser justified the current change of policy, arguing that the United States could not “simply stand back and wait for Cuba to change.”

She also said that Washington was interested in the changes that have occurred on the island which, according to her, have resulted from the rapprochement between the two countries since the restoration of diplomatic relations.

Rice added, “we believe that engaging openly and honestly is the best way to advance our ideals,” claiming that Washington is “making our democracy programs more transparent.”

It is under this label of “democracy programs” that the U.S. veils its regime change projects, to which it has allocated millions of dollars for decades, without achieving its objectives.

The directive contains almost identical terms in the final indications to the various levels of government, especially the United States Agency for International Development (USAID), which is in the sights of several countries due to its subversive work, and in Cuba was behind operations such as the ZunZuneo alternative social networking service, intended to create a support base among youth.

“The USAID will co-lead efforts with State to ensure that democracy programming is transparent and consistent with programming in other similarly situated societies,” the document details, as if the mere fact of making such programs transparent, without changing their subversive nature, would automatically make them acceptable to Cuba.

Beyond the obscurity in the phrase “other similarly situated societies” and assuming that Cuba is not the only country where Washington funnels money to try to influence the decisions of sovereign peoples who do not respond to its interests, several questions arise: what does making these programs “transparent” consist of? Does being “transparent” make them less subversive?

Recent examples, such as the case of scholarships for summer courses from the World Learning organization, awarded surreptitiously and behind the backs of Cuban authorities, are illustrative with regard to the real interests of these USAID-subsidised programs in the style of the “Colour Revolutions”.

The directive recognizes that these operations affect the process toward the normalization of relations, but gives no indication of any intention to change, nor modify, other aspects that undermine the ties between the two countries: “We anticipate the Cuban government will continue to object to U.S. migration policies and operations, democracy programs, Radio and TV Marti, the U.S. presence at the Guantanamo Bay Naval Station, and the embargo.”

The text continues, “The United States Government has no intention to alter the existing lease treaty and other arrangements related to the Guantanamo Bay Naval Station, which enables the United States to enhance and preserve regional security,” in reference to one of the essential sovereign demands of the Cuban people, regarding the illegally occupied territory, without whose solution normal relations are not possible.

WHICH CUBAN PEOPLE DOES IT AIM TO BENEFIT?

“The objective of the new policy is to help the Cuban people to achieve a better future for themselves,” the new presidential directive notes. However, it is clear that the bulk of changes made by the White House since December 17, 2014, are aimed at a very specific sector of the Cuban population and not at benefiting the majority.

Among the results the United States seeks in the long term with the transformation of its policy toward Cuba is “the development of a private sector that provides greater economic opportunities for the Cuban people.”

The text continues, “While the embargo remains in place, our role will be to pursue policies that enable authorized U.S. private sector engagement with Cuba's emerging private sector and with state-owned enterprises that provide goods and services to the Cuban people.”

The Cuban economic model, whose updating process has been submitted to popular consultation on several occasions, recognizes the non-state sector as a source of employment and a complement to the economic development of the country. However, the social ownership of the basic means of production and the socialist state enterprise are key to the present and the prosperous and sustainable future to which we aspire on the island.

In its conceptualisation of the Cuban people, the U.S. directive ignores the three of every four Cubans who work in the public sector and are not beneficiaries of current transformations.

Although undoubtedly the persistence of the blockade is the main obstacle to trade and the normalization of economic relations, the intention to prioritise the private over the public sector (which constitutes the majority in Cuba) for political purposes and to create divisions within the country is also clear.

The directive contradicts itself on stating, in the section entitled “Strategic Landscape”, that Cuba has “important economic potential rooted in the dynamism of its people, as well as a sustained commitment in areas like education and health care.”

For over half a century, private capital has not entered a Cuban school or hospital, but Washington does not hesitate to recognize both sectors as strategic strongholds for the country’s future.

MEASURES ON THE RIGHT TRACK BUT LIMITED

The latest round of measures from the departments of Commerce and the Treasury, which accompanied the publication of the directive, are on the same track as the previous ones, again with a very limited, selective and intentional scope.

While imports of Cuban pharmaceutical and biotechnology products to the United States are approved for the first time — for the benefit no doubt of its own population which will now be able to access treatments like Heberprot-P for diabetic foot ulcers — the restriction remains on creating joint ventures in this sector for the development and marketing of such products.

The opening in this area is evidence of the broad executive powers of the U.S. president to substantially modify aspects of the blockade, which continues to restrict exports of the vast majority of Cuban products to the neighbouring country, the largest market in the world.

Most measures are aimed at expanding transactions already authorized in previous packages, demonstrating their limited scope.

The ban on U.S. investment in Cuba remains, except in the telecommunications sector, which was approved in early 2015.

There is no new news to help dispel international doubts regarding the financial persecution to which Cuba is subjected and whose intimidating effects still prevent cash deposits or payments to third parties in U.S. dollars.

The fact remains that, despite the call on Congress to lift the blockade, the bulk of this aggressive U.S. policy remains standing; resulting in billions in losses for the country. Its effects even inhibit the implementation of the measures approved by the Obama administration.

The President of the United States is far from having exhausted his executive powers to make possible the effective implementation of the measures adopted thus far and decisively contribute to dismantling the blockade.

Still, the historic steps of the last 22 months can not be disregarded. Diplomatic relations were re-established and embassies reopened in both countries. Six U.S Cabinet secretaries have visited Havana and four Cuban ministers have travelled to the United States. Obama became the first U.S. president to visit Cuba since 1928.

A Bilateral Commission was established to discuss priority issues and agreements on environmental protection; marine sanctuaries; public health and biomedical research; agriculture; the fight against drug trafficking; security of travellers and commerce; civil aviation; mail; and hydrography have been signed. Talks on cooperation in law enforcement, regulatory and economic issues and claims, among others, have been launched.

The list of progress between two countries that just two years ago lacked an elementary diplomatic link is considerable. But a long road remains ahead to achieve a civilised relationship between neighbouring nations not only separated by 90 miles of sea, but by two centuries of convulsive bilateral history.

Beyond a directive drafted as if there were no problems between the two countries, and which could generate false expectations, the present time demands real political will to carry out the necessary changes and set aside both the carrot and the stick.

To hear more about the US blockade, Cuba-US relations, and much more, come to Latin America Conference on Saturday 26 November. Tickets are available online here.