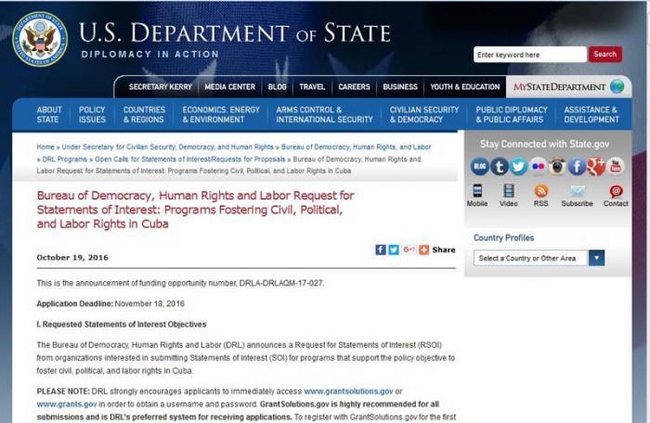 Even while the ink of Barack Obama’s new Presidential Directive on Cuba is not yet dry, an announcement for new subversive projects against Cuba was published on the U.S. State Department website

If you mix the same ingredients an equal number of times, the result will always be the same. However, the United States is attempting to change its Cuba policy while maintaining the same subversive recipe.

Even while the ink of Barack Obama’s new Presidential Directive on Cuba is not yet dry, an announcement for new subversive projects against the island, containing all usual ingredients of the typical aggressive and interventionist policies of the past, was published on the U.S. State Department website on October 21.

The Bureau of Democracy, Human Rights and Labour, is offering funding opportunities for projects which supposedly promote “democratic changes” in the spheres of civil, political and labour rights in Cuba.

Washington has historically used the guise of assistance projects to hide their subversive plans, not only against Cuba, but also communities which do not respond to the geo-strategic interests of the U.S.; while the country maintains relations with some of the nations with the worst human rights records on this planet.

The Bureau is offering those interested in interfering in the internal affairs of the island, some $5.6 million dollars, subject to availability.

IN LIGHT OF THE NEW DIRECTIVE

We want to engage “openly and honestly with the Cuban people,” stated U.S. National Security Advisor, Susan Rice, on October 14, in regards to the new presidential policy directive; adding that in order to do so, the so-called “democracy assistance” programs in Cuba will be made more “transparent.”

The final part of the directive contains terms almost identical to those used by various government bodies, in particular the U.S. Agency for International Development (USAID), which funnels billions of dollars into projects aimed at defending Washington’s interests around the world.

According to the directive, “The USAID will co-lead efforts with State to ensure that democracy programming is transparent and consistent with programming in other similarly situated societies,” as if the mere act of making these programs more transparent, without changing their subversive nature, would automatically make them acceptable for Cuba.

The new announcement helps to dispel doubts surrounding euphemisms by the U.S. government: “DRL’s programmatic emphasis aligns with the U.S. government policy to promote human rights in Cuba,” reads the announcement. It continues by noting that “DRL prefers creative approaches” to fulfilling its objectives and that approved activities “should have potential for short-term impact leading to long-term sustainable reforms.”

Among activities typically funded by the DRL the announcement highlights: “Capacity building on and off the island. Off-island activities sometimes include short-term fellowships.”

Cuba recently denounced the true intentions behind the World Learning program, offering surreptitious summer scholarships to Cuban youth and organised outside of the state apparatus, which aim to create an alternative leadership movement to promote regime change on the island.

“Access to software that would be easily accessible in an open society, or the adaptation of software for the Cuban technological environment,” is another priority area.

The most recent example of such projects was the case of ZunZuneo revealed by U.S. news agency AP, in 2014.

USAID financed the creation of an alternative cell-phone messaging service, which came to be known as the Cuban Twitter, targeting the island’s youth with apparently inoffensive messages on sports and culture. However, the app was really designed to create a platform among this sector of Cuban society, which could be used to launch future destabilisation initiatives.

According to the DRL announcement, projects can be submitted by “a U.S.-based or foreign-based non-profit organisation/non-governmental organisation (NGO), or a public international organisation,” among others.

The clearest demonstration of the masked interests of DRL funded programs lies in their supposed objectives on the island: “Programs should support the realisation in Cuba of the rights and principles enshrined within the following Articles of the Universal Declaration of Human Rights,” including “the prohibition of torture or to cruel, inhuman or degrading treatment or punishment…The right to a free and fair trial before an independent and impartial tribunal; the right to privacy; the freedom of movement within one’s country; the right to freedom of thought, conscience and religion;” in addition to “the right to work in conditions of dignity with fair remuneration and the right to form and to join trade unions for the protection of the workers’ interests.”

The announcement also notes that the “DRL strives to ensure its projects inter alia advance the rights and uphold the dignity of the most vulnerable, marginalised or at-risk populations.”

Anyone who stays informed as to what’s happening in Cuba, and is aware of the negative propaganda continually published by the mass media, will know that the island’s recently approved Labour Code is at the vanguard of global labour rights.

In Cuba, men and women receive equal pay for equal work, while employee maternity, paternity, and social security rights, which private sector workers also enjoy, are achievements which are still only a dream in various other countries across the world.

The only acts of torture perpetrated in Cuba are carried out in the territory illegally occupied by the Naval Base in Guantánamo, under U.S. control, where 60 individuals are currently being held, all deprived of their most basic legal rights.

It seems like a waste of money, even for a power like the United States, to allocate 5.6 million dollars to helping supposedly excluded minorities in Cuba, when African Americans in the U.S. are being targeted by police and the unemployment rate among this sector is double that of the country’s Caucasian population.

Neither does the U.S. recognise the Convention of the Rights of Migratory Workers and their Families, employing degrading practices in blatant violation of human rights against those travelling to the country in order to improve their economic situation.

While the nation’s rich continue to amass more wealth, the U.S. maintains the highest child poverty rate among all industrialised countries, and continues to violate the rights of thousands of migrant minors; indiscriminately separated from their parents.

Washington should take care when using such explosive ingredients in its failed subversive recipe against Cuba, as it won’t be the first time the mix ends-up blowing up in their hands. One might think that Obama’s policy change toward Cuba would include abandoning “failed policies,” but everything seems to indicate that some powerful sectors of the U.S. refuse to “leave the past behind.”

To hear more about US intervention in Cuba and much, much more, come to Latin America Conference on Saturday 26 November. Tickets are available online here.