Is the U.S. trade embargo risking lives in Cuba? 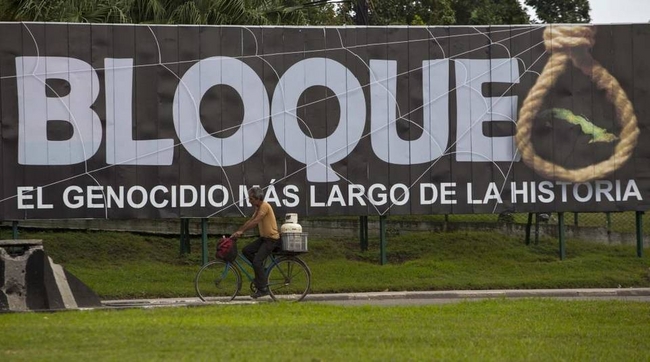 WASHINGTON - Despite the improved ties between the United States and Cuba, the United Nations is expected to again condemn the American trade embargo against the communist island.

For the 25th year in a row, Cuba has called for the United Nations to issue a resolution against the U.S. “blockade,” as the Cubans refer to the U.S. embargo against Cuba.

“We hope again – we cannot anticipate the vote, we will see on Oct. 26 – that the international community will be on Cuba’s side and call for an end to the blockade,” Josefina Vidal, who heads the U.S. Department at Cuba’s Foreign Ministry, told students last week during a conference at Havana University.

In what is expected to be a telling display of the international perspective on the United States’ continued application of the embargo, the U.N. General Assembly is expected to overwhelmingly pass a resolution Wednesday calling for end to the U.S. policy that restricts trade between the countries.

U.N. Secretary-General Ban Ki-moon calls the embargo the “most unjust, severe and long-lived system” of sanctions ever applied against a country. The U.S. government has sought to end the embarrassing ritual against the United States, but the Cuban government has declined to stop or even tone down its scathing account of how the island has been affected.

The Cuban government estimates the U.S. embargo has cost the island more than $125 billion over the half-century that it’s been in place. Cuban leaders document the impacts in great detail, from the somewhat trivial to life-threatening, in a blistering 42-page report. They raise questions as to whether the U.S. government has put Cuban lives at risk because of sanctions that restrict access to diagnostic equipment for leukemia patients and devices crucial for pediatric heart surgery.

It’s not a new report. The language has long been harsh. But what’s significant is how little has changed despite the warming relations between the nations, as well as the U.S. administration’s reported requests to soften Cuba’s anecdotes.

“I think the Cuban view is this is an important point of political pressure on the United States to move faster to lift the embargo,” said professor William LeoGrande, a specialist in Cuban politics and U.S. foreign policy toward Latin America at American University School of Public Affairs in Washington. “And they don’t want to do anything to relieve that pressure.”

Since Dec. 17, 2014, when President Barack Obama and Cuban leader Raúl Castro announced that they would take steps to normalise relations, the United States has issued six rounds of regulatory changes to ease trade, travel and financial restriction with Cuba. But the Cuban government said the administration needed to go further.

“President Obama recently reiterated in the presidential directive signed last Friday that the blockade should be lifted, but the reality is that he has not exhausted all his executive powers to contribute decisively to the removal and dismantling of the blockade,” Vidal said.

State Department officials said they were looking into questions regarding the U.N. vote.

The list of items Cubans want and can’t get from the United States is long. The government says the impacts are far-reaching and go beyond the obvious. The Cuban government can’t buy Louisville Slugger baseball bats or Wilson baseballs. Because Cuban schools couldn’t buy $79 beginner violins from the United States. they had to pay nearly three times the cost for violins from a third country.

Ban applauded Obama’s calls to end the trade embargo. But he said the administration’s efforts were insufficient considering the ongoing “financial persecution” of Cuba. In his own 175-page report, he documented how the island government still cannot freely export and import goods and services from the United States or have direct banking.

“The embargo against Cuba must stop,” Ban said. “It is the most unjust, severe and long-lived system of unilateral sanctions ever applied to a country.”