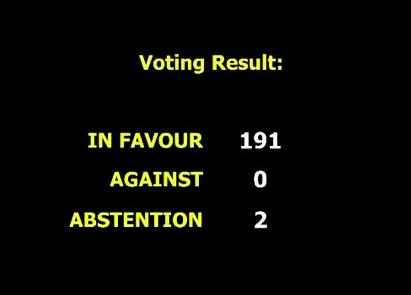 On Wednesday the United Nations general assembly voted in favour of a Cuban resolution calling for an end of the US blockade in a historic vote with 191 - 0 in favour of ending the over 50 year old US blockade policy.

For the 25th consecutive year, the United Nations general assembly voted in favour of ending the blockade, but for the first time in history, the United States abstained (and its ally, Israel), resulting in zero opposition to the resolution. The outcome of the vote is not legally binding.

This is a historic moment in the 25 year history of UN votes to end the US blockade. However, in reality it changes nothing. The blockade is still in place, and until it ends, Cuba will continue to present its annual motion to the UN.

While we welcome the US decision to abstain, it is not how the US votes that matters, but its policies and actions towards Cuba. President Obama wants to send a clear message to Congress and the world that he is serious about ending the blockade. The clearest way to do that is to take action to end it. Cuba has issued a list of 20 measures that Obama can take before he leaves office to modify aspects of the blockade including authorising imports and allowing Cuban entities to open bank accounts in the US.

In its statement to the UN today the US admitted that their policy of blockade had failed and in fact had “undermined the goals it set out to achieve.” Fundamentally, the US goals of regime change remain the same. On the one hand the Obama makes statements about working together and moving forward to the end the blockade, while at the same time his government continues to fund regime change activities and fine foreign banks for working with Cuba.

The US action today is a positive step in improving relations between the two countries. But it in no way diminishes the need to continue international pressure to end the blockade once and for all.