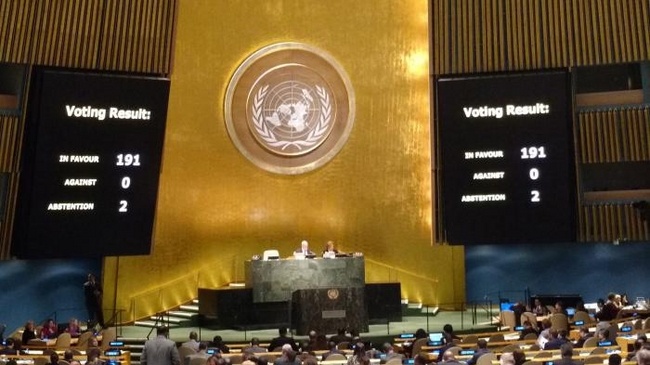 THE US sensationally abstained in the United Nations’ annual vote condemning its own blockade of Cuba yesterday for the first time in 24 years.

Washington’s UN ambassador Samantha Power (pictured) admitted the US policy had failed and had in fact “undermined the goals it set out to achieve.”

Earlier anonymous diplomats said Ms Power would list parts of the motion Washington objects to, despite the government’s overall support for lifting the embargo.

The source claimed without those elements Ms Power would be voting in favour of lifting the blockade.

They said the administration had considered abstaining from the vote last year, but concluded it could not do so because the resolution did not reflect what it considered to be the spirit of engagement between US President Barack Obama and Cuban counterpart Raul Castro.

Caribbean bloc Caricom representative Courtenay Rattray of Jamaica stressed that “virtually the entire international community has consistently highlighted that this … measure is inconsistent with international law” and called on the assembly to “bury the last remnant of the cold war in the Americas.”

Community of Latin American and Caribbean States (Celac) representative Francis Lorenzo of the Dominican Republic called the 55-year blockade “unjust” and a “major obstacle to the normal development of Cuba.”

The UN general assembly has voted to condemn Washington’s criminal embargo on socialist Cuba every year since 1992.

The number voting for the motion against the embargo has risen from 59 to 191 last year, while only the US and Israel have consistently voted against.

But she cautioned: “In reality it changes nothing. The blockade is still in place, and until it ends, Cuba will continue to present its annual motion to the UN.”

Ms Hickman said the surprise abstention was a “clear message” from Mr Obama to the Republican-controlled Congress, which has opposed the two-year process of detente with Havana, that he was “serious about ending the blockade.”

“The clearest way to do that is to take action to end it,” she said.

“Cuba has issued a list of 20 measures that Obama can take before he leaves office to modify aspects of the blockade including authorising imports and allowing Cuban entities to open bank accounts in the US.”