Cuba's Case Against Blockade is Made 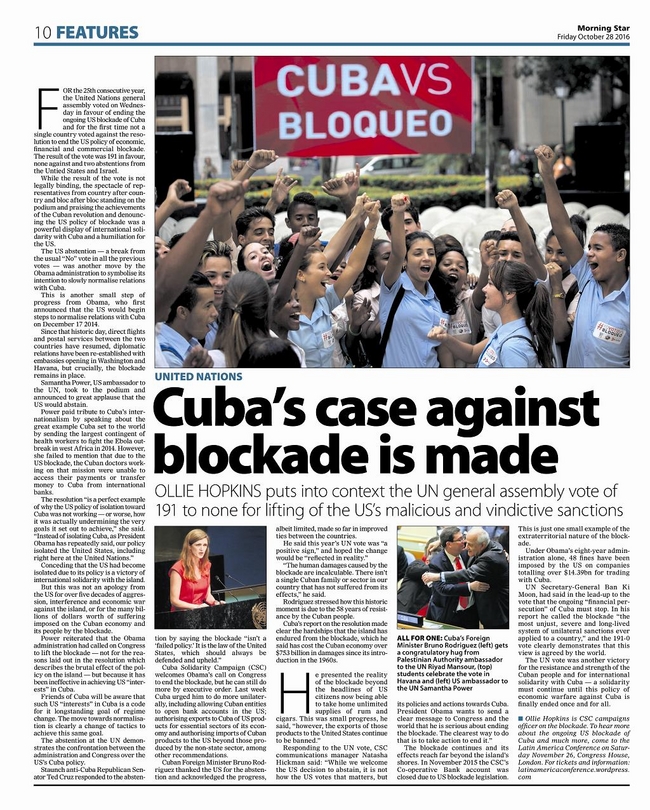 For the 25th consecutive year, the United Nations general assembly voted on Wednesday in favour of ending the ongoing US blockade of Cuba and for the first time not a single country voted against the resolution to end the US policy of economic, financial and commercial blockade. The result of the vote was 191 in favour, none against and two abstentions from the Untied States and Israel.

While the result of the vote is not legally binding, the spectacle of representatives from country after country and bloc after bloc standing on the podium and praising the achievements of the Cuban revolution and denouncing the US policy of blockade was a powerful display of international solidarity with Cuba and a humiliation for the US.

The US abstention — a break from the usual “No” vote in all the previous votes — was another move by the Obama administration to symbolise its intention to slowly normalise relations with Cuba.

This is another small step of progress from Obama, who first announced that the US would begin steps to normalise relations with Cuba on December 17 2014.

Since that historic day, direct flights and postal services between the two countries have resumed, diplomatic relations have been re-established with embassies opening in Washington and Havana, but crucially, the blockade remains in place.

Samantha Power, US ambassador to the UN, took to the podium and announced to great applause that the US would abstain.

Power paid tribute to Cuba’s internationalism by speaking about the great example Cuba set to the world by sending the largest contingent of health workers to fight the Ebola outbreak in west Africa in 2014. However, she failed to mention that due to the US blockade, the Cuban doctors working on that mission were unable to access their payments or transfer money to Cuba from international banks.

The resolution “is a perfect example of why the US policy of isolation toward Cuba was not working — or worse, how it was actually undermining the very goals it set out to achieve,” she said. “Instead of isolating Cuba, as President Obama has repeatedly said, our policy isolated the United States, including right here at the United Nations.”

Conceding that the US had become isolated due to its policy is a victory of international solidarity with the island.

But this was not an apology from the US for over five decades of aggression, interference and economic war against the island, or for the many billions of dollars worth of suffering imposed on the Cuban economy and its people by the blockade.

Power reiterated that the Obama administration had called on Congress to lift the blockade — not for the reasons laid out in the resolution which describes the brutal effect of the policy on the island — but because it has been ineffective in achieving US “interests” in Cuba.

Friends of Cuba will be aware that such US “interests” in Cuba is a code for it longstanding goal of regime change. The move towards normalisation is clearly a change of tactics to achieve this same goal.

The abstention at the UN demonstrates the confrontation between the administration and Congress over the US’s Cuba policy.

Staunch anti-Cuba Republican Senator Ted Cruz responded to the abstention by saying the blockade “isn’t a ‘failed policy.’ It is the law of the United States, which should always be defended and upheld.”

Cuba Solidarity Campaign (CSC) welcomes Obama’s call on Congress to end the blockade, but he can still do more by executive order. Last week Cuba urged him to do more unilaterally, including allowing Cuban entities to open bank accounts in the US; authorising exports to Cuba of US products for essential sectors of its economy and authorising imports of Cuban products to the US beyond those produced by the non-state sector, among other recommendations.

Cuban Foreign Minister Bruno Rodriguez thanked the US for the abstention and acknowledged the progress, albeit limited, made so far in improved ties between the countries.

He said this year’s UN vote was “a positive sign,” and hoped the change would be “reflected in reality.”

“The human damages caused by the blockade are incalculable. There isn’t a single Cuban family or sector in our country that has not suffered from its effects,” he said.
Rodriguez stressed how this historic moment is due to the 58 years of resistance by the Cuban people.

Cuba’s report on the resolution made clear the hardships that the island has endured from the blockade, which he said has cost the Cuban economy over $753 billion in damages since its introduction in the 1960s.

He presented the reality of the blockade beyond the headlines of US citizens now being able to take home unlimited supplies of rum and cigars. This was small progress, he said, “however, the exports of those products to the United States continue to be banned.”

Responding to the UN vote, CSC communications manager Natasha Hickman said: “While we welcome the US decision to abstain, it is not how the US votes that matters, but its policies and actions towards Cuba. President Obama wants to send a clear message to Congress and the world that he is serious about ending the blockade. The clearest way to do that is to take action to end it.”

The blockade continues and its effects reach far beyond the island’s shores. In November 2015 the CSC’s Co-operative Bank account was closed due to US blockade legislation. This is just one small example of the extraterritorial nature of the blockade.

Under Obama’s eight-year administration alone, 48 fines have been imposed by the US on companies totalling over $14.39bn for trading with Cuba.

UN Secretary-General Ban Ki Moon, had said in the lead-up to the vote that the ongoing “financial persecution” of Cuba must stop. In his report he called the blockade “the most unjust, severe and long-lived system of unilateral sanctions ever applied to a country,” and the 191-0 vote clearly demonstrates that this view is agreed by the world.

The UN vote was another victory for the resistance and strength of the Cuban people and for international solidarity with Cuba — and solidarity must continue until this policy of economic warfare against Cuba is finally ended once and for all.

Ollie Hopkins is CSC campaigns officer. To hear more about the ongoing US blockade of Cuba and much more, come to the Latin America Conference on Saturday November 26, Congress House, London. For tickets and information: www.latinamericaconference.wordpress.com