Cuban collaborators celebrate 16 years of cooperation between Cuba and Venezuela 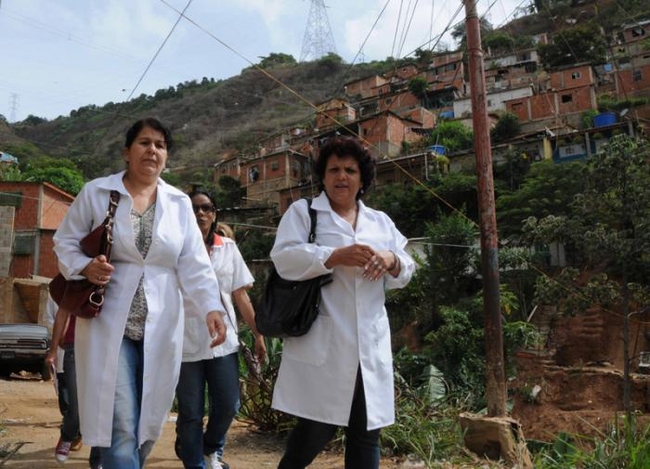 CARACAS.— During a cultural event with Cuban music, dance and verse, collaborators of all the social missions in the Venezuelan capital celebrated 16 years since the signing of the Comprehensive Cooperation Agreement between the Cuba and Venezuela.

In the Teatro Principal, situated close to the legendary Plaza Bolívar in the center of the city, health, education, sports, culture and other sector professionals celebrated the strong ties of friendship between two revolutions evidenced by bilateral cooperation offering concrete benefits to both peoples.

Cuban Ambassador to Venezuela, Rogelio Polanco, described the solidarity demonstrated by the thousands of Cuban collaborators who offer the best of their knowledge and skills to improve the quality of life of Venezuelans as admirable, noting that Cuba’s internationalism has seen the island gain global prestige and resulted in victories such as the worldwide support during the recent UN vote to lift the U.S. blockade.

Víctor Gaute, coordinator of the Cuban missions in the South American country, stressed that beyond the direct contribution of collaboration in health, sports, culture and virtually all sectors of economic and social life of Venezuela, the Comprehensive Cooperation Agreement has also provided training for Venezuelans themselves to maintain the socialist programs of the Bolivarian Revolution.

“The more than 20,000 comprehensive medical graduates, the 5,000 specialists in general medicine that recently graduated, the new teachers and cultural promoters trained in the same communities by Cuban professionals are a clear example; just as our Comandante en Jefe, the architect of this extraordinary idea, said in the beginning.”

This Sunday, October 30, Venezuelan President Nicolás Maduro, through its official Twitter account, described 16 years of the Comprehensive Cooperation Agreement as a symbol of the strength of relations between the two nations.

“Venezuela and Cuba are two countries that fate has always wanted to unite in a single embrace,” he tweeted, while stressing the mutual benefits of the Caracas Agreement of October 30, 2000, creating socialist missions for the welfare of the Venezuelan people, and offering Cuba access to oil at fair prices.

Maduro also stressed that the bilateral cooperation framework has been a challenge to the brutal U.S. economic blockade.

Since the signing of the Agreement by the revolutionary leaders Fidel Castro and Hugo Chávez, more than 200,000 Cuban collaborators have offered their services in the South American nation.