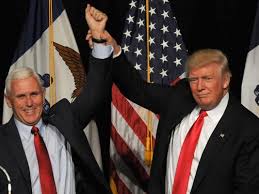 Cubans who fled Cuba for southern Florida and other parts of the United States in the 1980s to escape the communist Castro regime have been solid Republican supporters since the era of President Reagan and his fight to end communism around the world.

But in the past several decades, the children and grandchildren of that first wave of Cuban exiles, known as Cuban-Americans, have settled in many U.S. cities. And like their fellow urban residents, they have voted more for Democrats.

“Big story, Cubans endorsed me,” Trump said Saturday in Tampa, referring to an endorsement recently in Miami from the Bay of Pigs Veterans Association, a group of retired U.S. military members that in 1961 launched a failed attack on the Cuban bay.

Trump also stopped the rally to hold up a sign that read: “Cuban Women for Trump” and said, “I love all of these signs.”

Trump, the 2016 GOP presidential nominee, and Hillary Clinton, his Democratic rival, are in a tight race in Florida and in the handful of other battleground states that on Tuesday will decide their White House contest.

Clinton and other Democrats have for decades held the minority vote, largely black and Hispanic residents. But Trump, a first-time candidate, like other Republican presidential nominees before him, has tried desperately to appeal to both voting blocs in an effort to upset Clinton, who has led from the start of the race.

Obama this spring used his Executive Office powers to remove Cuba from the list of state sponsors of terrorism in an attempt to “normalize relations” with Cuba, which means opening up more trade and tourism between the countries to put an end to their Cold War-era standoff.

However, Republican leaders largely disagreed with the president’s move, particularly over continuing human rights violations, but failed to block it.

Early voting so far in the Clinton-Trump race among Hispanics, a voting bloc in which Cuban-Americans are typically included, suggests strong support for Clinton. However, early voting among blacks appears significantly lower for Clinton, compared to the historical levels for Obama, the county’s first African-American president.

Clinton, in her effort to win over the Hispanic vote in Florida, Nevada and even Republican-leaning Arizona, has tried to portray Trump as opposed to almost all immigrants.

“If you are Latino, you know what life would be like because we’d have a president who doesn’t see you as American,” Clinton said Thursday in Las Vegas.

On Friday, Pence said Miami that Obama -- “with Clinton’s support” -- re-opened the U.S. embassy in Havana and suggested that the president, if possible, would have lifted the entire trade embargo on Cuba.

“Well let me make you a promise: When Donald Trump is president of the United States, we will repeal Obama’s executive orders on Cuba,” Pence said.