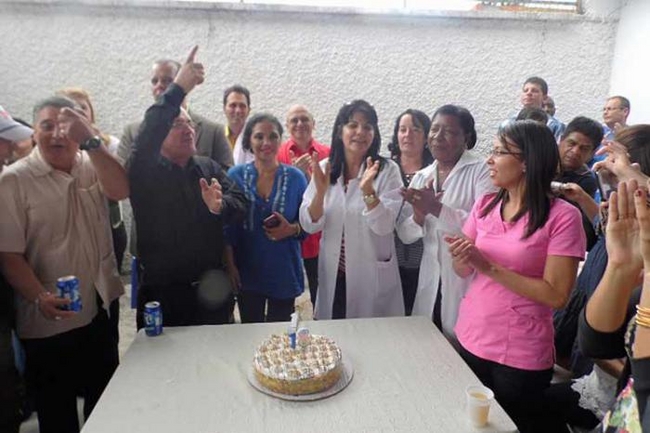 Health professionals from the island have returned eyesight to 156,000 Guatemalans

Guatemala.— Cuban doctors, nurses, technicians, and other professionals continue sharing their love today in all corners of Guatemala, just as they first did 18 years ago.

The dedication of this army of white coats, as Comandante en Jefe Fi­del Cas­tro named them, has earned the affection and respect of many people in this land, as was made clear during the celebration commemorating their arrival in 1998, following Hurricane Mitch.

Testimony from former patients who have recuperated their vision thanks to Operation Miracle, the Brigade's flagship program; friends from the solidarity group Guatemalan National Revolutionary Unit (URNG); Catholics; and Cuban residents in the country made clear just how much the collaborators have done along the way.

"This solidarity work, this work the Brigade has given us as a country, as a society, with so much dedication over these 18 years, is commendable," said Juan Ramón Ruiz, the URNG's secretary for International Relations.

He emphasised that Cuba arrived with the sole purpose of filling an enormous void, a void that, many years after their initial arrival, continues to exist. Ruiz expressed the hope that, "One day, the Guatemalan health system will be capable of reaching these villages, these remote places, and save hundreds of human lives as the Brigade has."

Speakers took note of the absence of Guatemalan government authorities at the event, and in particular that of the Public Health and Social Assistance Minister, though the human warmth of those present surpassed expectations.

Protagonists of the Brigade's memorable accomplishments in the wake of the 1998 hurricane were also in attendance.

"I had the privilege, as a Cuban doctor, to work in the initiation of the comprehensive health program that year, precisely when hurricanes George and Mitch devastated these countries," Dr. Yilian Jiménez told Prensa Latina.

Now Brigade coordinator in the country, Dr. Jiménez said that coming to Guatemala and making Fidel's idea a reality was a privilege, and that there is good reason to celebrate how much has been done to strengthen the health infrastructure of a country where it is much needed.

The Cuban Medical Brigade has a presence in 16 Guatemalan departments, and more than 156 professionals work in primary health care in remote areas, where no other medical services are available to patients, she reported.

The doctor likewise expressed the great satisfaction she feels seeing Guatemalan graduates from the Latin American School of Medicine in Havana - which number more than 1,000 - now working across the entire country.

Cuban Ambassador to Guatemala, Carlos Manuel de Céspedes, reported that Cuban specialists have restored the eyesight of 156,000 Guatemalans and saved 400,000 lives, while providing 40 million consultations over the years.

"We don't have the financial capital, but we do have good human capital - you. This is what we must defend," the diplomat said, emphasising the importance of continuing the Brigade's work, sharing love, and fulfilling the sacred duty of serving others.

Those present recalled the first Cuban health professionals who were sent to the La Tinta Hospital, located in the community of the same name in the northern department of Alta Verapaz, where they overcame multiple obstacles to treat those injured during Hurricane Mitch.

Since then, this facility has become a symbol of fraternity, and one of the bastions contributing to the development of medicine in the country, where this brigade of hope and love between Cuba and Guatemala has undoubtedly left an indelible mark.

To hear more about Cuba's internationalism and solidarity with Latin America and much more, come to the Latin America Conference on Saturday November 26, Congress House, London. For tickets and information: www.latinamericaconference.wordpress.com