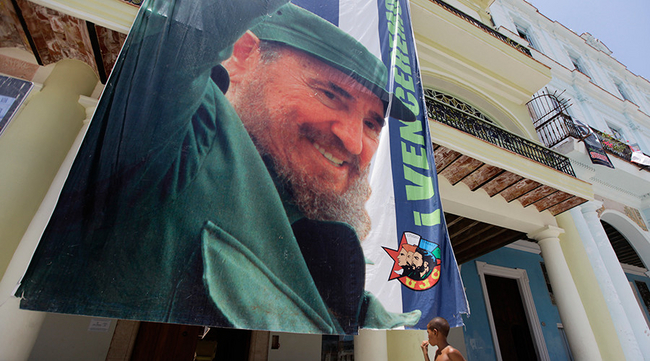 Fidel Castro dedicated his life to resisting empire and the ocean of injustice and oppression inflicted in its name. His death marks the end of the man, and the birth of a legend that will endure for centuries to come.

Such is the legacy that Fidel leaves behind it is impossible to fully comprehend the sheer magnitude of the role he played in breaking the chains of millions across the Third World, both literally and figuratively, in defiance of the racist conceit of apologists for imperialism. From leading a revolution in 1959 that succeeded against the odds in toppling the pro-Washington dictator, Fulgencio Batista, he went on to not only make history but mold and shape it thereafter.

When at 30 he first came to world prominence as leader of the Cuban Revolution, rolling into Havana on a captured tank under a blazing Caribbean sun, the long beards, hair, and anarchic energy and courage that he and his comrades carried cemented their place as harbingers of a new chapter in the development of the much maligned Global South. With daring, courage, and belief, they proved it was possible to break the chains of exploitation, injustice, and degradation that had scarred the lives of so many generations before them, forging in their place a future of justice, human solidarity, and dignity.

In 1959, Dwight D. Eisenhower was sitting in the White House and Barack Obama’s birth still lay two years ahead. Ten US presidents and many assassination attempts could not defeat Fidel Castro – this over the course of a life during which he remained a man of unflinching principle and indomitable will in his commitment to the ideals that drove him and his comrades to emancipate the Cuban people from the economic and geopolitical clutches of Washington.

Evidence that the flame of defiance and revolution never went out despite his advancing years was provided by the rebuke he delivered to Obama in response to his address to the Cuban leadership and people during his state visit to the island earlier this year. Fidel’s reply to the President’s patronizing lecture on democracy and human rights came by way of a 1,500-word letter in the country’s official newspaper, the ‘Granma.’ In it, he reminded the Cuban people, Obama, and the world at large of the history of mendacity that had informed not only Washington’s relations with Cuba, but also Africa, where Obama traces his own ancestral origins.

As Castro wrote: “Nobody should be under the illusion that the people of this dignified and selfless country will renounce the glory, the rights, or the spiritual wealth they have gained with the development of education, science and culture.” He went on, “I also warn that we are capable of producing the food and material riches we need with the efforts and intelligence of our people. We do not need the empire to give us anything.”

Even towards the end of his life, he was under no illusions when it came to rapprochement with Washington. How could he after his long experience of its role in trampling the rights, lives, and dignity of millions of human beings, the vast majority of them people of color, across the world? How could he retreat for a moment from his unwavering stance against imperialism and the slavery it had inflicted on its victims?

The magnitude of the shadow that Fidel cast over global events for half a century is testament to the fierce attachment to internationalism that underpinned his worldview. No greater tribute was there to that internationalism than Cuba’s role in defeating apartheid in South Africa. Though conveniently omitted from the official history of the anti-apartheid struggle that predominates in the West, the truth of Fidel Castro and Cuba’s indispensable role cannot be denied. Indeed, none other than Nelson Mandela went to his grave saluting it.

As Mandela said when he visited the island in 1991, just a few weeks after being released from captivity on Robben Island: “The Cuban people hold a special place in the hearts of the people of Africa. The Cuban internationalists have made a contribution to African independence, freedom, and justice unparalleled for its principled and selfless character.”

The deployment of thousands of Cuban troops to Angola in the 1970s and 80s, their success in breaking the myth of white supremacy in confronting and defeating US and Western supported apartheid South African troops, stands as one of the most powerful examples of international solidarity the world has witnessed.

In truth, there are so many examples of Fidel’s unwavering stance in solidarity with the oppressed against their oppressors that it would take an entire book to list them all. Kwame Nkrumah, Patrice Lumumba, Nelson Mandela, Malcolm X, Che Guevara, Camilo Cienfuegos, Bobby Sands, Ben Bella – the roll call of legendary revolutionaries and freedom fighters who have come and gone in Fidel’s lifetime marks by itself a tribute to his legacy, and the tempestuous period he lived through.

Yet, perhaps the most important aspect of Fidel’s legacy is the way he transformed the lives of millions of Cubans in the realms of education, healthcare, and sustainable development, albeit truncated by a decades-long US trade embargo inflicted on the island and its people with the objective of bringing it to its knees. However, even through the ‘special period’ of the 1990s, when after the demise of the Soviet Union, Cuba stood alone as a socialist country and society in a sea of global capitalism, the revolution survived.

“A revolution is a struggle to the death between the future and the past,” Fidel once memorably said. Though the man has died, the ideas for which he struggled and to which he dedicated his life will undoubtedly live on, not just in Cuba but anywhere imperialism and the exploitation of the weak by the strong is a fact of life.

Though his detractors may celebrate his death, truth will always prevail. And the truth, when it comes to Fidel Castro, is that he led and inspired a revolution that today ensures the only place you will find homeless Cuban children in the world is Miami.

Not only did the Cuban Revolution give life to millions in Cuba and throughout the Third World, it gave millions a reason to live.