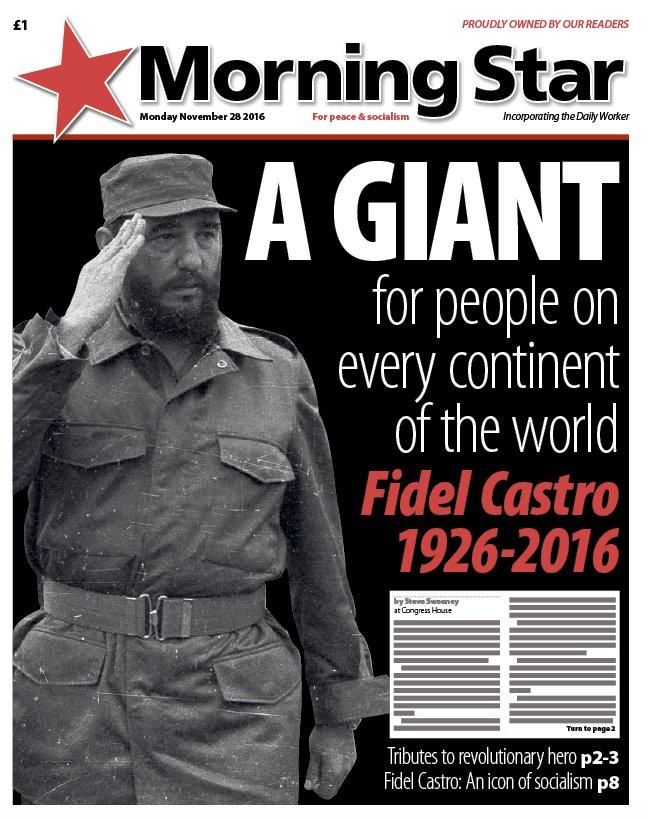 AN OUTPOURING of tributes to legendary Cuban leader Fidel Castro was heard at a sombre and defiant Latin America solidarity gathering at the weekend, following his death at the age of 90.

News of his passing broke hours before delegates, including trade unionists, politicians, academics and ambassadors, arrived at the annual Latin America Adelante 2016 conference in London on Saturday.

Cuba Solidarity Campaign national secretary Bernard Regan opened the conference by sending a message of condolence to the family of the revolutionary hero.

He said: “We stand in solidarity and give a commitment to the defence of the Cuban revolution and to continue to fight the illegal and immoral blockade.”

Mr Regan lauded Mr Castro as a “giant for people on every continent of the world” who had “shaped the politics of generations.”

He declared that “the legacy of Fidel will live on” and that the Cuban revolution demonstrates that “another world is possible.”

“Onward to victory always. Hasta la victoria siempre. We will win,” he proclaimed to applause.

A minute’s silence was held as delegates paid their respects.

Labour leader Jeremy Corbyn described Mr Castro as “a massive figure in the history of the whole planet” and “a champion of social justice.”

“From building a world-class health and education system to Cuba’s record of international solidarity abroad, Castro’s achievements were many.

“For all his flaws, Castro’s support for Angola played a crucial role in bringing an end to apartheid in South Africa and he will be remembered both as an internationalist and a champion of social justice.”

Speakers and delegates at the conference attacked US president-elect Donald Trump for having called Mr Castro a “brutal dictator.”

Former Respect MP George Galloway said: “Hundreds of millions of people across the world would be mourning Fidel Castro,” adding that they would be doing so long after Mr Trump had been consigned to “the dustbin of history.”

He reminded delegates that, before Mr Castro took power, “Cuba was a byword for misery and oppression,” insisting that “the Cuban people will never agree to return to the days before the revolution” of corruption and casino capitalism.

Delegates were reminded of the many achievements of the Cuban revolution, which overthrew the Batista dictatorship in January 1959.

Under Mr Castro’s government, there were huge advances in health and education.

“UN leaders never acknowledge” that Cuba has achieved all their education goals, Ms Blower pointed out.

The Cuban ambassador and embassy staff attended the conference, but they were in floods of tears and too emotional to speak.

Nicaraguan ambassador Guisell Morales-Echeverry said: “My heart is with Cuba. Fidel Castro showed what solidarity was in those years when the whole world seemed against us.”

She said Cuba supplied her country with teachers and doctors and added that, although “our hearts are sad … we can see light in these dark times because of Castro.”

Former London mayor Ken Livingstone said there was “no threat bigger than Fidel” to US corporations, which is why the world was brought “to the brink of war.”

“All this is under threat, as Trump will try to roll it back. It will be the end of humanity if we don’t change things.”

Delegates vowed to continue the fight while upholding Mr Castro’s maxim of “not an inch to imperialism.”

By Steve Sweeney at Congress House