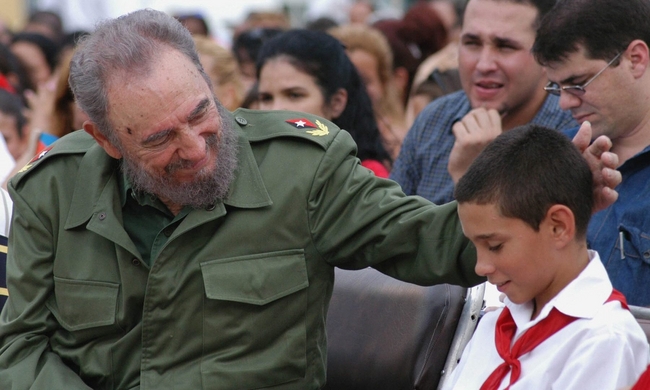 Fidel Castro with Elián González in 2005

The blockade is still in place and the election of Donald Trump poses new and serious threats to Cuba, warns ROB MILLER

SUPERMAN is a fictional hero, but we Cubans have the pride of having a real hero like Fidel. That hero has greater powers than Superman, because he can move millions, has the power to be invincible and immortal, because while Superman dies in a movie, Fidel is still alive in the hearts of Cubans” — Elian Gonzalez.

Elian Gonzalez was the then seven-year-old boy at the centre of an international custody battle between the Miami Cubans and the people of Cuba. He was finally returned to his father in Cuba where he has lived ever since. He spoke in Revolution Square at the funeral for Fidel Castro where he paid tribute to the historic leader of the revolution.

Elian’s story and his words on the passing of Fidel illustrate how, through his leadership, Fidel has given the Cuban people the strength and determination to resist the enormity of the blockade and the aggression from its huge superpower neighbour just 90 miles across the Florida Straits.

From the birth of the revolution, through the victory at the Bay of Pigs, the incredible survival through the worst of the “special period” following the collapse of the Soviet Union and most incredibly surviving the illegal US blockade — Cuba has defied the odds.

Cuba’s resistance is legendary. While travel guides and holiday companies have proclaimed:

“Go to Cuba before it changes” — a “polite” way of predicting the collapse of the revolution — the Cuban people themselves have stood firm in defence of their sovereignty and in defence of their achievements in health, education and social care. They are rightly proud of Cuba’s status across the globe in sports, arts and culture as well as the amazing legacy of their international health missions of solidarity.

While the Cuban people have given so much, the international solidarity movement has itself stood shoulder to shoulder with the people of Cuba. Most recently in the 16-year campaign for justice for the Miami Five, where trade unionists, politicians and campaigners in Britain worked tirelessly and effectively until their release was won.

Today, following the death of Fidel, the Cuban people need our solidarity more than ever.

The US blockade is still in place, Guantanamo Bay is still illegally occupied and US interference in Cuba continues.

While there has been welcome progress, including the re-establishment of diplomatic relations, the Obama administration did not go far enough with its Cuba policies.

The election of Donald Trump to the presidency of the United States, where he will be in office alongside Republican Party majorities in both houses of Congress, now raises new and serious threats to Cuba.

Following Fidel’s death, Trump immediately attacked him and his legacy in the most crude terms. “It is my hope that today marks a move away from the horrors endured for too long, and toward a future in which the wonderful Cuban people finally have the freedom they so richly deserve.”

Worryingly, he concluded: “Our administration will do all it can to ensure the Cuban people can finally begin their journey towards prosperity and liberty.”

And then, on Monday morning, following a series of blustering anti-Castro pronouncements on the TV talk shows by his aides Kellyanne Conway and Reince Priebus, and by Senator Ted Cruz and Senator Marco Rubio, Trump tweeted again: “If Cuba is unwilling to make a better deal for the Cuban people, the Cuban-American people and the US as a whole, I will terminate any deal.” It appears that Trump is looking to carry out his threats against Cuba and reverse the trajectory of US policy begun by Barack Obama.

The US Office of Foreign Assets Control (OFAC) has collected incredible fines in excess of $14 billion from international companies, including British banks such as Barclays, Lloyds and RBS, for trading with Cuba due to blockade legislation, during Obama’s administration.

The Cuba Solidarity Campaign itself has been a victim of the blockade for many years and in November 2015 had all its bank accounts closed by the so-called “ethical” British bank the the Co-operative. Co-op chief executive Niall Booker was forced to finally admit in writing that the closure was due to “risk” arising from the sanctions imposed by the US government.

The fact is that Cuba continues to suffer at every level from the blockade, which has a huge negative effect on the lives of every Cuban and the ability of the state to provide services for its people. The threat of such huge fines continues to block international trade and investment with Cuba.

Florida Republican Mario Diaz-Balart, who in the House of Representatives has called for the reversal of Obama’s Cuba policies, has suggested that a change in direction will happen quickly.
“All of these things that the president [Obama] has done as unilateral concessions to the Castro regime, the days are numbered to all of those,” he said. “I expect it to happen pronto.”

It is a ridiculous notion to suggest that Cuba somehow needs to make any “concessions.” The US policy has been completely unilateral. It is a 60-year policy of blockade and violent aggression, including invasion and assassination attempts, as well as a policy of financing and orchestrating terrorist attacks against the people of Cuba in which more than 3,500 Cubans have died.

Cuba could perhaps be accused of being a threat of a good example. Indeed Castro and the Cuban people have been the best example to millions across the globe. They represent a beacon of hope for a better world where no-one is left behind because of their colour, gender or ability to pay.

As we witness millions in Cuba and hundreds of millions across the globe mourning the passing of Castro, we must make sure that international solidarity with Cuba continues and develops.

Together we can help the Cuban people themselves ensure that the inspiration that is Cuba continues to shine.