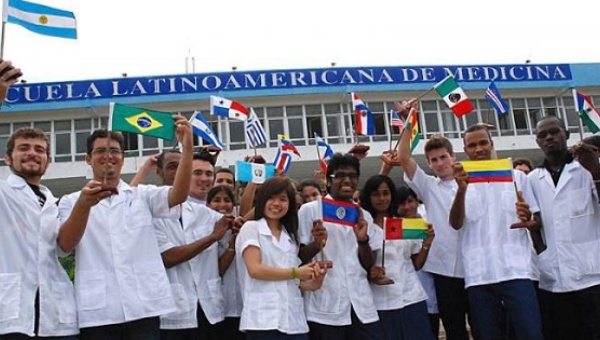 The caravan has not only provided an opportunity for Cubans all over the country to say farewell to Fidel, but it has also provided a time for reflection of the enormous gains that the revolution has achieved since Fidel made the original journey, wrtes OLLIE HOPKINS

THIS weekend Fidel Castro returns to Santiago de Cuba, the cradle of the revolution, for his final resting place.

This week has witnessed Cubans from all generations across the island paying their tributes to the historic leader of the revolution.

Cuba has been in a nine-day period of public mourning, which ends at midday tomorrow.The week began with tens of thousands of Havana residents queuing to pay their respects at Revolution Square on Monday and Tuesday.

A huge rally with hundreds of thousands in attendance followed at Revolution Square on Tuesday evening, with speakers including Raul Castro, Rafael Correa and Jacob Zuma.The procession of Fidel’s coffin began making its way through the streets of Havana following the Revolution Square events.

The procession then departed the capital on Wednesday and travelled the over 500-mile journey to Santiago, retracing the iconic 1959 Caravan of Liberty, in reverse.

In retracing the 1959 route, the caravan has not only provided an opportunity for Cubans all over the country to say farewell to Fidel, but it has also provided a time for reflection of the enormous gains that the revolution has achieved since Fidel made the original journey.

The parade looked out onto a very different Cuba in 2016 from that of 1959. As Dr Steve Ludlam said at the Latin America Conference last weekend: “Haiti is what Cuba would have looked like now, if it was not for Fidel Castro and the Cuban revolution.”

In pre-revolution Cuba, 42 per cent of the population was illiterate, education was the privilege of the wealthy and there were few schools in rural areas.

In an interview with the BBC following Fidel’s death, Cuban poet, novelist and broadcaster Pedro Perez Sarduy said how “black people were at the bottom” in Cuba before the revolution. After the revolution “all the opportunities were open” to people who had never had such opportunities before, he said: “Like people from my background — who could then enjoy higher education.”

Today, Cuba spends the highest percentage on Earth of its GDP towards education. Illiteracy was eradicated shortly after the revolution following a mass campaign, and education is free and universal at all levels.

In 1959 there were just three medical schools in Cuba. Now there are 23. Cuba has the highest doctor to patient ratio in the world. It is free to train to become a doctor, and the island trains not only Cubans, but medical students from across the developing world at its world-leading Latin America School of Medicine (ELAM), where even working-class students from the United States study for free.

In Cuba today, children from all backgrounds can become doctors, teachers, ballet dancers or sportsmen and women.

The original Caravan of Liberty was a triumphant moment for Fidel. The six-day victory parade witnessed by jubilant Cubans all over the country left Santiago on January 2, making its way slowly through rural Cuba, towns and cities until finally arriving in Havana on January 8 1959.

The caravan, much of which was broadcast on Cuban television, enabled Fidel to articulate some of the revolution’s guiding principles — which continue to this day.

In his first post-revolution speech, on January 2 1959 in Santiago, Fidel said: “The revolution begins now … this time it will not be like 1898, when the North Americans came and made themselves masters of our country. This time, fortunately, the revolution will truly come to power.”

That these words still ring true today is a testament to both the Cuban people and Fidel’s leadership. The US has indeed spent over five decades trying to make themselves masters of Cuba again, but the world’s most powerful country has not been able to overthrow a small Latin American island and its revolutionary government.

Days later in Camaguey, central Cuba, Fidel spoke to an ecstatic crowd and said: “I’m sure that behind the faces of those humble men and women, after the moment has passed and they return home, their minds return to the immense heap of worries each of them carries,” and he spoke of how the cost of medicines was a huge worry for ordinary Cubans.

Cubans now certainly do not worry about affording medicines if they fall ill, or whether they can afford to see a doctor.

In addition to a legacy of independence and sovereignty, Fidel has left a legacy of dignity to the people of Cuba. Before 1959, Cuba was a playground for the US; with casinos, gangsters and prostitution. Nowadays, much of the world sees Cuba as a beacon; Cuba is known for its socialism, solidarity and internationalism.

The route passed various landmarks steeped in revolutionary symbolism this week including Santa Clara on Wednesday, the scene of the armoured train, where under Che Guevara’s leadership, his battalion won a major victory in the Battle of Santa Clara against Batista’s forces.

After arriving in Santiago, a mass commemoration will take place at the Antonio Maceo plaza on Saturday. On Sunday, the journey finally ends, when Fidel’s ashes will be interred at Santa Ifigenia Cemetery, where fellow Cuban national hero Jose Marti also rests.

Despite all the US attacks and assassination attempts, Fidel died naturally, as an old man, on his terms. It is a fitting end that Fidel will rest alongside Marti. Both men fought for independence and against foreign intervention on the island. And as Cuban poet Nicolas Guillen said 40 years ago: “What Marti promised, Fidel delivered.”

Ollie Hopkins is campaigns officer for the Cuba Solidarity Campaign.