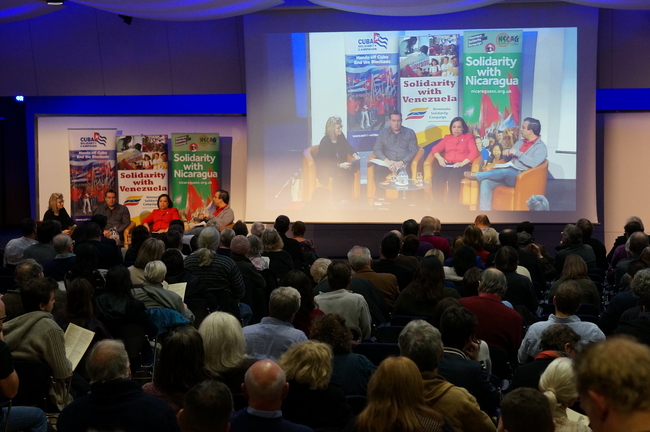 The 12th annual Adelante! Latin America Conference took place only hours after the death of the historic leader of the Cuban Revolution, Fidel Castro Ruz.

The passing of the Cuban hero certainly changed the mood of the entire conference, with speakers, guests and visitors clearly moved by the events, but many inspirational speeches were given to lift the mood and continue Fidel’s legacy of creating a better world.

Bernard Regan, Cuba Solidarity Campaign National Secretary opened the conference paying tribute to Fidel, whose legacy and impact on the world was reached far beyond the shores of Cuba. “From north of Africa in Algeria, where health workers first went in the early 1960s, to the south of the continent where Cuba played a key role in anti-apartheid struggle in South Africa and independence struggles in Angola, to the mountains of Kashmir where Cuba was the first country to send doctors following their earthquake – Fidel’s legacy has been reached all over the world”.

Fidel was “a giant for people on every continent of the world” who had “shaped the politics of generations”, he said.

A minute’s silence was held in the main hall in remembrance of the Cuban Revolutionary.

In a roundtable discussion on Latin American perspectives on the US presidential elections, Nicaraguan Ambassador Her Excellency Guisell Morales Echaverry said “This conference today is dedicated to Fidel and to Cuba. Viva Cuba! Viva Fidel!” to a standing ovation.

She said how although some setbacks have taken place in Latin America recently, the huge victory of Ortega in Nicaragua demonstrates the left is still moving forward and is supported by strong social movements in the region.

The Canadian journalist and author Keith Bolender spoke about US aggression against Cuba in the session. “US destabilisation in Cuba started just days after the Revolution. Their tactics may have changed, but the strategy of regime change is still the same. I say, bring it on. Cuba has survived over 50 years of hostility, so I’m sure they’ll survive American friendship”.

In the seminar ‘Living with the enemy: the truth behind the headlines of US-Cuba relations’, Dr Steve Ludlam said how Fidel Castro’s legacy was that “he gave Cuba its independence and sovereignty” and “Haiti is what Cuba would have looked like, if it was not for its revolution”.

Dr Ludlam warned, “Despite improving relations, foreign companies are still reluctant to trade with Cuba due to the poisonous atmosphere due to the blockade. And Trump’s election has made that atmosphere worse. We have to keep campaigning against the blockade and against the occupation of Guantanamo”.

Keith Bolender spoke of his optimism for the future if the normalisation of relations process continues between the US and Cuba:

Bernard Regan told delegates how the US has changed its policy on Cuba due to the island being the “gateway to Latin America”, as Hillary Clinton wrote in her book. “Cuba does not need to change”, he said, “It’s the United States that has had to change its policy, and it must continue in this process”.

Kiri Tunks, vice-president of the National Union of Teachers (NUT) gave an insight into an NUT October half term delegation to Cuba during a seminar on the Pillars of the Revolution.

The NUT vice-president said how she was “I was humbled and inspired” by her experience on the delegation. “There is arts and music everywhere in Cuba – truly incisive and accessible for all. The teachers are highly qualified, and there is a great emphasis on pedagogy, reflection time and CPD, with a holistic approach to everything”

“Everybody who was on the delegation has returned inspired after seeing another way of education - we want what the Cubans have!” she said.

Imti Choonara, Emeritus Professor in Child Health paid tribute to the world-class child health in Cuba, despite being a developing country under blockade. “It’s not perfect, they have problems, but what they have achieved with their resources is incredible.”

“They are never satisfied with what they’ve got in Cuba. For example, they have high breastfeeding rates, but they always want more.” He spoke of Cuba’s ability to organise hurricane and disaster relief so effectively across the island, including the recent Hurricane Matthew.

In a plenary ‘Showing another world is possible’, Bolivia’s Ambassador H.E. Roberto Calzadilla said “Today is a sad day, but at the same time not a sad day as Fidel’s legacy and spirit lives on” in the region.

Christine Blower, NUT International Secretary, said there is “So much we can learn from Latin America. But we need to take what we learn from this conference and take it to our workplaces, trade unions and beyond.”

“Cuba is an absolute example of what can be done in education and in health”, she said. “It’s a choice and matter of political will – Cuba’s free education, including free university education has not just benefitted Cuba but all over Latin America and the developing world. The Ebola epidemic would have been worse and gone on for longer if it were not for the intervention of Cuba.”

Ken Livingstone, former Mayor of London, said how “all that crap” in the media following Fidel Castro’s death was “breathtaking.”

“Fidel, like so many others, was in politics to improve the lives of ordinary people”, he said and quoted Nelson Mandela in 1991 who said "What country has ever needed help from Cuba and has not received it?"

Her Excellency Rocio Maniero, Venezuelan Ambassador, said “Fidel’s passing hurts us a lot. But his legacy continues”, and gave an update on the “Economic war” taking place in Venezuela, “similar to what took place in Allende’s in Chile”, she said.

In the final seminar in Cuba, on the continuing US blockade, more tributes were paid to Fidel Castro.

George Galloway, former MP, broadcaster and filmmaker gave an uplifting speech in memory of Fidel: “Fidel Castro is not dead. Fidel Castro lives on in every poor person who seeks a better world…. There are hundreds of millions today mourning his passing.”

“What was his greatest legacy? The internationalism of the Cuban Revolution. The Cubans always thank us for the solidarity that we, in our own way, we give to them. But the truth is, it should be we that thanks them. There is no country on earth like Cuba”, Galloway said.

On a day when the mainstream press was filled with anti-Cuba smears and misinformation, Keith Boldender said “There is another blockade – and today has been an example of that – an information blockade. This is all part of attempts to try and portray Cuba in the worst way possible. Every lie that can be told, has been told about Cuba”, he said.

“If your child wants to be a doctor, a dancer, a sports person, in Cuba they can… we need to defend that beacon of light in Cuba so that we can learn and share from their example”.

Paul Oquist, Nicaraguan Minister for Public Policy, said “Fidel Castro is the greatest revolutionary on the second half of the twentieth century”

“Fidel created an independent and sovereign state in Cuba. And in Nicaragua, we’re doing that too. We are building a state that can resist attacks and threats – including the threat of climate change.”

The Nicaraguan Representative to the COP21 and COP22 climate change conferences noted how “Nicaragua has increased its renewable energy supply from 25% in 2011 to 56% last year.”.

Former MP Chris Williamson rounded up the conference for the second year running. He called on progressives to organise to prevent the right gaining more ground in the region following the parliamentary coup in Brazil, quoting Billy Bragg’s lyric, “And wearing badges is not enough in days like these”.

He said “Fidel Castro's wonderful legacy will forever inspire progressive movements around the globe to build a fairer world free from poverty”.

Visit the Latin America Conference website for a full report, including Tweets from throughout the event