Fidel will take shape in us 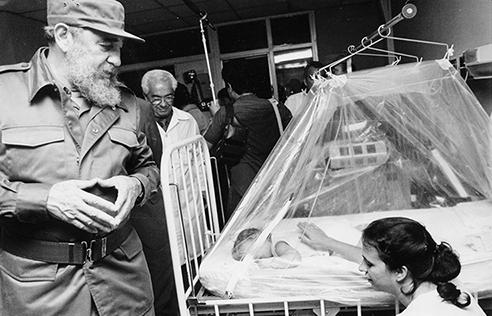 A young journalist writes about growing up with Fidel's presence

I do not remember a day without a smile in Cuba. I was a child during the 1990s when there were barely a few hours of electricity a day, and food and clothing and much more was scarce. In the nights of the blackouts, I was entertained with stories about my mother’s family or her own versions of the classics. And, when the heat was unbearable, I would go out to play hide and seek, and catch fireflies.

Today, I try to pinpoint when Fidel arrived in this story, but I don’t succeed. He has been there as long as I have had memory: in the Plaza on my dad’s shoulders, on the TV in the living room when he made an appearance during the children’s schedule, at school and in the neighbourhood.

But what I remember best from that time are the jokes. The one in which Fidel, Yeltsin, and Clinton reach the gates of heaven... or when Pepito saves his life and he grants him a wish. One learned to identify when he was spoken of, whether with a gesture in reference to his beard, or with one of his thousand nicknames like that of El Caballo (The Horse).

Later, I ended up in a confrontation more than once. In Arnoldo Alemán’s Nicaragua, they asked me if I was a Cuban from Miami or for Fidel, and they didn’t always like the answer. At the age of 10, I was already a radical. It started when I saw children begging on the side of the road, and when I heard some doctors talking about insurance or a cash payment, before they stitched up my head. That day, the car we were in had flipped over twice before stopping at the edge of a hillside on the Masaya Volcano, more than 900 meters high. The Panamanian couple who helped us decided to take me first and leave my parents. I had never felt so alone, and so poor.

I met Alemán at a cattle show, he touched my head and kissed me, one of those gestures typical of some politicians when met by children and cameras. “How I have wished for a kiss from Fidel, and look who I ended up with,” my mother quietly commented when the President had left.

The first speech by Fidel that I am conscious of was that on September 11, 2001. I was 12 years old and was at the barbers' when someone came in with the news: “The Iraqis attacked the United States.” Now that I think about it, that would not have been so bad for Bush, but the situation was much more complicated. I rushed home and Cuban television was transmitting the images from CNN, live at the moment when the first, and minutes later, the second tower of the World Trade Centre collapsed.

That evening, Fidel went to inaugurate the Salvador Allende School, close to my neighbourhood, and he said something I will never forget: terrorism can not be fought with more terrorism. Of course, no one could argue this was even close to some of his most brilliant phrases, but it was the first of many analyses that I began to collect for myself. I wrote them down in a long list of predictions, which time proved to be accurate.

I discovered Fidel late. I started university in 2006, the year that he left his position for health reasons. I never stopped reading his reflections, and began to collect his books, even those that brought together speeches from different eras. In this way, I have conversed long hours with the statesman, the politician, the strategist, and with the human being behind all that.

I also came late to Granma, where the older journalists tell stories of how Fidel would come here and sit down to make some of the most important decisions for the country, and write the editorials in his own handwriting.

I saw him from a distance on the steps of the University of Havana, and during the 7th Party Congress, when he was painfully accurate in predicting that this would be the last time he would speak to us.

If life allows me to grow old, I will one day be able to say that I lived in the era of Fidel Castro, and I talked with him many times, even if I have only my books to prove it.

Cuba awoke on November 26 without him for the first time in 90 years. It was a grey morning. People walked slowly and in silence. They did not talk to each other.

It may be that they need time, perhaps years, to finish reading the news of his death, of which everyone is talking, and about which they prefer to be silent, at least for now.

The sun came out later that day in Havana and then set, but the city marched three times slower than usual. The same faces that have overcome the blockade, the daily necessities and life itself, were paralysed as Raúl made the announcement to Cuba and the world that midnight.

I am not saying that in Cuba there aren’t a few who do not suffer this loss; just as in Miami, where others came out to celebrate the death of a man who they attempted to assassinate hundreds of times and who survived 11 U.S. administrations to die at the age of 90, alongside his family and his people. But that joy will always be a crooked grin and never a true smile.

Fidel’s death is the greatest national event of my generation, which was not in the trenches during the invasion of Playa Girón or during the Missile Crisis; who could not cry when Fidel read Che’s farewell letter, or when the tributes were made to those killed in the terrorist act over Barbados.

But I have the feeling that the smile will return to Cuba. Not today or tomorrow, but it will return. And it is not that the absence of the Comandante en Jefe will be filled by someone else, but that a new Fidel will take shape in each one of us and will accompany us every time we think of Cuba, which is the best way to think about him. At that moment, the prediction that his adversaries always feared will have been come true: the guerrilla of the Sierra will be immortal.