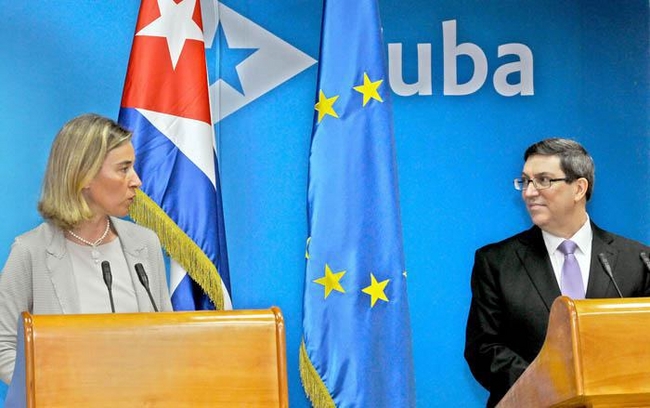 Ambassadors of the 28 member countries of the European Union agreed to sign a political and cooperation agreement this Tuesday, December 6, to normalise relations with the island

BRUSSELS.—This Tuesday, December 6, the 28 countries of the European Union (EU) approved the signing, at the level of their ambassadors, of a political and cooperation agreement to normalize relations with Cuba, PL reported.

According to the official EU website, the decision to sign the agreement — which is still pending a further approval process — was taken by European officials in the Belgian capital and is expected to be ratified shortly by the European Council.

As such, EU member states confirmed their support for the three initiatives put forward last September by the High Representative of the Union for Foreign Affairs and Security Policy, Federica Mogherini.

Mogherini insisted that these measures will be taken to “formally repeal” the so-called Common Position (a policy adopted in 1996 by the European bloc to regulate its ties with Cuba) and thus encourage better relations between the EU and the Caribbean nation.

The EU Council of Ministers must approve the decision, which also requires the subsequent agreement of the European Parliament in order to be implemented.

The official signing of the document by Mogherini and Cuban Foreign Minister Bruno Rodríguez will be held next Monday, December 12.

Cuba and the EU began the process of negotiating the Political Dialogue and Cooperation Agreement (PDCA) in April 2014, which was signed on March 11 this year, during a ceremony in Havana attended by Mogherini.

Cuba welcomes the decisions taken by the Economic and Financial Affairs Council of the European Union on December 6, 2016, in Brussels, with which the bloc concluded the process of internal consultations and decisions regarding the Political Dialogue and Cooperation Agreement with Cuba, on the one hand, and the European Union and its Member States, on the other.

Cuba recognises in particular the political significance of the decision that definitively repeals the so-called Common Position of 1996, which since its adoption was firmly rejected by our country due to its interventionist, selective and discriminatory nature. This unilateral policy had been de facto superseded, as evidenced by the positive evolution in recent years of Cuba’s ties with the European Union and its member states.

For Cuba it was imperative that such a vestige of the past, contradictory to the bases of equality, reciprocity and respect, on which relations with the European Union have developed since 2008, be completely removed.

The decisions adopted by the EU create the conditions for the signing of the Agreement, which will for the first time provide a reciprocal, respectful and mutually advantageous contractual framework for relations between the two parties, for the development of political dialogue and cooperation, including trade facilitation.