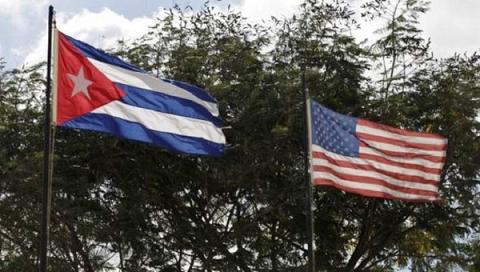 Both parties also reaffirmed their willingness to continue building ties of peaceful co-existence and mutual benefit, during the fifth Bilateral Commission meeting, held December 7, in Havana

This December 7, Cuba reaffirmed its willingness to continue working to improve relations with the United States and build ties of peaceful co-existence and mutual benefit, during the fifth Bilateral Commission meeting, held in Havana.

Speaking to the press, Josefina Vidal, director general for the United States at Cuba’s Ministry of Foreign Relations and head of the island’s delegation to the Commission, stated that the country is willing to identify new opportunities and work to build a different kind of relationship with the U.S. - a civilised one based on respect, without making any kind of concession or renouncing principles to which the island is committed.

According to Vidal, during the meeting the Cuban delegation explained that the reestablishment of diplomatic relations, opening of embassies, and development of cooperation ties in distinct areas benefit the two countries and reflect the interests of both parties.

“We also spoke about how developing relations in the economic-trade sphere could benefit the two countries, an issue in which we have only taken initial steps, given that we still face a very restrictive framework, from the point of view of the regulations which prevail in the United States,” she added.

Economic-trade relations can only be expanded if the blockade is lifted, which would create important opportunities to develop these ties, stated Vidal.

She went on to note that Cuba and its government hope that the new U.S. administration will not only take into account the results of the Bilateral Commission over the past 15 months, but also those achieved since rapprochement began following the December 17, 2014 announcements, a process supported by the majority of Cuban and U.S. citizens, including most Cubans living in the U.S., and the vast majority of countries around the world.

Vidal also confirmed that an ambitious work agenda - which will require a concerted effort by both parties in order to achieve the desired results and resolve certain pending issues – was drawn up during the meeting, this time presided by Acting Assistant Secretary of State for Western Hemisphere Affairs Mari Carmen Aponte.

We intend to conclude discussions on the majority of key issues we have been negotiating with the government of Barack Obama, by January, noted Vidal.

In this sense she highlighted that work is underway to finalise negotiations and sign 12 new cooperation agreements in spheres such as seismology; meteorology; protected land areas; sea pollution caused by oil spills; the application and enforcement of the law; search and rescue operations; and delimitation of the Dona Oriental in the Gulf of Mexico.

Vidal noted that the next high level visits, holding of work groups - set to take place over the coming weeks and focusing on issues featuring in the Economic Bilateral Dialogue which began in September, such as regulatory matters, energy, trade and investment, and intellectual property - and technical encounters on aviation, and between Cuba’s border troops and the U.S. Coastguard, were all established during the meeting.

She also stressed the Cuban delegation’s insistence that, despite positive measures taken by the U.S. government, these continue to be of a limited scope, while the persistence of the blockade has significantly impacted the country’s trade and economy. “The lifting of the blockade is vital if Cuba and the United States are to have normal relations,” she stated.

The Cuban diplomat reported that the island’s delegation repeated its call for the territory illegally occupied by the U.S. Naval base in Guantánamo to be returned, and an end to existing interventionist policies which harm Cuban sovereignty, in order to advance on the path toward the normalisation of relations.

She went on to state that the delegations undertook a positive assessment of the results of the fourth Bilateral Commission, held in Washington on September 3, highlighting the high level visits made by both parties; the adoption of a new agreement in the field of health (Memorandum of Understanding for Collaboration in the Area of Cancer Control); resumption of regular flights to Havana from the U.S.; the holding of technical encounters on air space and aviation security, health, environmental protection, and hydrography; as well as others linked to the application and enforcement of the law, and talks on issues of bilateral and multilateral interest, such as human rights, and the non-proliferation of weapons and disarmament.

Vidal noted that both parties recognised the usefulness of the Commission, created in August 2015, during U.S. Secretary of State John Kerry’s visit to Cuba, which has resulted in the signing of 12 cooperation agreements on issues of mutual interest and 24 high level visits.

Finally, the Cuban diplomat highlighted that the island is continuing to see a sustained increase in arrivals of U.S. citizens, with just over 208,000 having visited Cuba by the end of October 2016, representing an increase of 68% as compared to the same period last year.

Meanwhile, 248,000 Cubans residing in the U.S. travelled to the island between January and October of 2016, an increase of 4%, she noted.

Vidal also reported that over 1,200 cultural, scientific, academic, and sporting exchanges have taken place from January through October, this year, representing an increase of 12% as compared to 2015.