Cuba: A Heartwarming Experience To Remember 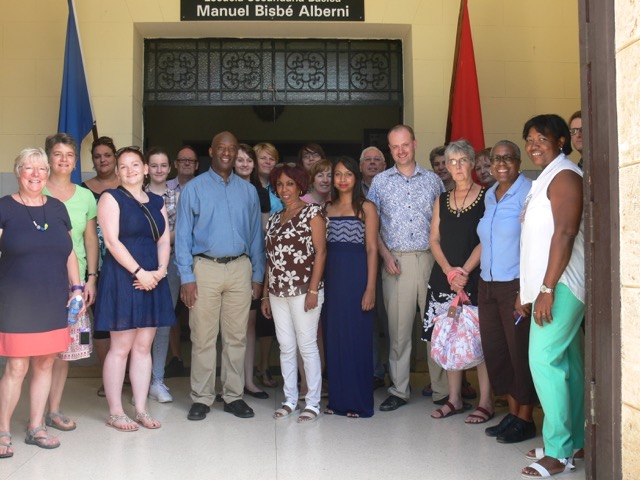 I was fortunate to be a part of the NUT delegation to Cuba at the end of October and was so impressed by the community spirit and positive atmosphere flowing everywhere.

Walking around I was continually surrounded by music, dancing and smiley faces.

We visited many schools and universities and I was impressed with the range of courses and services on offer.

The relationships between students and teachers was unique. There was so much trust placed on both sides.

Teachers talked about how they saw the children as their sons and daughters when they were in school. It was important to look after them as a school is like a student’s second home with the amount of time spent in them. Walking around I was taken aback when a little girl leaned in to give me a kiss on the cheek. I can’t hug a distraught pupil in class never mind accepting a kiss.

The president of the students union spoke to us about activities the union organises. He said all students are welcome and the only thing they take into account is that students are fully capable and willing to take part in the activities. They do not care about nationality, race or religion and feel it is important to make regular links between communities and students.

There are many international students from over 20 different nationalities. As well as making local community links the students make links with places abroad such as Africa, Latin America and the Middle East and have a student network where they all support and help each other.

All education in Cuba is free including going to university. Cubans are very educated.
One of the first post-revolution campaigns was the literacy campaign where thousands of people, of all ages, all over Cuba were taught to read and write. Having free universities was a way of opening the doors for all young people to educate them into the professions the country needs.

The only debt the students said they had when they leave is a “debt to the people.”
University education is not the only way forward and Cubans made it clear that all jobs are important and no position is more important than another. Ensuring equality in all aspects of daily like was important and a point very conversation came back to.

Everyone I met in Cuba was friendly and welcoming. We went to a committee for the defence of the revolution in Marianao. These are community networks who all work together and support each other. We were greeted with a line of smiles, flags and drinks. People were so welcoming and many told me their home was now my home too. A lady spoke to me about life under the blockade and said that they may have little but it is enough. They learn to live with the little they have and if they have more then they share it between them.

Walking around Cuba I was regularly approached by people asking where I was from and my family background. Many hadn’t met a Bengali before and I lost count of the offers I had to go out salsa dancing with people.
It was nice to meet people of all ages excited to meet someone different.

Landing back in London it was clear the atmosphere was not quite the same and I missed the music, compliments and smiles.

Walking along with the group, we were stopped by one of the airport staff, who asked some of us where we had come from and he pointed to aisle 1 for bags from France. He then pointed at me and said to go to aisle 9 for bags from Bangladesh. What a way to be welcomed home.

Can someone take me back to Cuba!