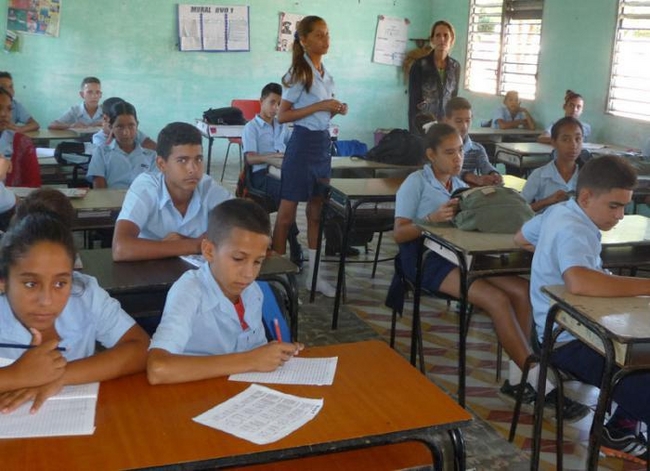 A general overview of the recovery efforts underway in San Antonio del Sur, proves that the process is gradually advancing thanks to the support of residents, and especially campesinos and workers, who have been leading initiatives.

SAN ANTONIO DEL SUR, Guantánamo — It is no wonder that Elena Laffita Bertot looks calm and satisfied as we speak in the municipal electoral commission headquarters, where she works as a services assistant, given that her home, among the 4,000 affected by Hurricane Matthew in the municipality, was one of the first to be repaired.

“I think I was lucky, my roof was almost completely destroyed, and six or seven days after the hurricane we had already repaired it.

“Everything happened really fast: the Housing commission visited me, they gave me a damages certificate and specification sheet with the amount of materials I was entitled to. The following day I went to sign some papers, then I was given a bank loan and went and bought 30 fiber-cement roof sheets straight away, the same number that were destroyed by the hurricane,” states Elena, who lives in the neighbourhood of Playa Sabanalamar.

Why do mention luck?

Well, because I know that many families still haven’t repaired their homes, as so many were damaged. Resources keep arriving, but even so it’s not enough for all the houses at once. That’s why I think I was lucky.

Of the 4,009 houses which were damaged in San Antonio del Sur, 815 had been repaired and around 1,000 other families had received roof sheeting and other building materials, by December 6, reported Israel Rodríguez Mengana, president of the Municipal Defence Council.

According to Rodríguez Mengana, despite the high number of families still waiting to receive materials, on the whole the recovery process is advancing in a well-organised and positive manner.

In this sense, he highlighted that 1,316 bank loans (totalling a little over seven million pesos) to re-build or repair damaged homes have been granted; 79 partial Social Assistance subsidies awarded to families without the financial resources to pay the full loan amount or purchase materials; and 152 full subsidies for those without any means of payment.

The President of the Defence Council explained that damages to electricity, communication, and water services were repaired over a month ago, the latter after the 10 municipal aqueducts were recuperated.

In the days immediately following the hurricane, the Bate route was re-opened, guaranteeing overland communication between Guantánamo, Baracoa, and the rest of the municipalities in the province.

“First to be repaired were the Mulata route, blocked at over a dozen different points, and the Puriales de Caujerí bridge, damage to which saw the area divided in two, preventing vehicles and persons from travelling between the municipal capital and various communities located north of the bridge.

”These repairs allowed us to re-establish national bus service on four of the five hilly routes, while the San Antonio del Sur-Viento Frío connection, which saw damage to the El Jubo to Alto de La Zona road, is yet to be repaired,” reported Rodríguez Mengana, adding that work is currently underway to repair the La Mulatica highway, which passes through a mountainous stretch connecting Guaibanó with the town of Vega del Jobo in the municipality of Imías.

The President of the Defence Council went on to note that progress is being made in recovery efforts in state institutions, including those linked to trade, gastronomy, education, health, transport, the food industry, community services, and agriculture, among others.

Lastly, Rodríguez Mengana noted that this coming December 23, San Antonio del Sur will host the provincial act celebrating the 58th anniversary of the triumph of the Revolution, by which time 90% of state institutions affected by Hurricane Matthew should be fully repaired.

According to residents, a few hours after Hurricane Matthew hit the territory coffee growers from the municipality were already making their way to their plantations, where hundreds of trees had been uprooted and toppled by the storm.

They also say that with the support of three brigades equipped with chainsaws (one from Granma Province, the other from the Asdrúbal López coffee processing plant and another from the municipality) a process to clear and assess the damage caused by fallen trees over the 771 hectare area were quickly undertaken; and followed by efforts to gather all the beans that had been knocked off by the hurricane.

Céspedes Lobaina Arias, an Agriculture Ministry representative in San Antonio del Sur, noted that an estimated 4,000 tins of bean were knocked down, of which around 3,000 were recovered, “in a praiseworthy effort, I mean collecting coffee on the plantations is difficult, so imagine what it’s like gathering it off the ground.”

These efforts saw the municipal coffee harvest plan surpassed, highlighted Rolíder Cala Noa, deputy Agricultural delegate, who also reported that “of the 18,635 tins planned, 20,930 were collected by last Tuesday (December 6), and the final section of beans were harvested in the zones of La Zona and Dos Brazos.”

For anyone with any knowledge of coffee growing, these figures may be insignificant, but for us they hold a greater value, as they represent a definitive productive response at a very difficult moment, when the majority of producers’ homes had also been damaged by Matthew. The figure also represents an increase of around 8,000 tins as compared to last year’s harvest.

According to Colíder recovery efforts are progressing well, with 628 - or 81.5% - of the 771 hectares affected by the storm, recuperated; while the three chain saw brigades continue to work alongside coffee growers and their families.

In regards to cacao, another of the island’s export products, 197 hectares have been recovered and three tons of the fruit have been collected, following Hurricane Matthew.

In the agriculture sector, planting varied crops, above all tomatoes, requires the most resources and effort.

To date, tomatoes have been planted in 600 of the 650 planned areas across Valle de Caujerí; despite damage caused by heavy rainfall to seedbeds and designated plots, which were prepared up to three times in many areas, stated Egueni Rodríguez Martínez, deputy director of development at the San Antonio del Sur Agricultural Enterprise.

The specialist explained that the municipality has incorporated a plan for extra vegetables, root crops and grains, into its customary winter planting campaign - of which 71.5 hectares have already been completed - in order to produce more crops in a short amount of time, and mitigate the impact of a reduction in the number of bananas, after trees were uprooted during the storm.

As part of this plan, 15 hectares in the area have been cleared and prepared for planting by the Fe­liberto Rodríguez and Constantino Lores credit and services cooperatives.

”The majority of fields included in the production plan were covered with Acacia shrubs and hadn’t been exploited in many years. Given the fertility of the soil it was decided to plant chickpeas above all,” stated Eliécer Carcasés Pérez (more commonly known as Joselito) owner of La Dama farm.

Thus a general overview of the recovery efforts underway in San Antonio del Sur, proves that the process is gradually advancing thanks to the support of residents, and especially campesinos and workers, who have been leading the aforementioned initiatives, as well as those to re-establish 170 hectares of banana plantations, with localised irrigation in Yateritas.