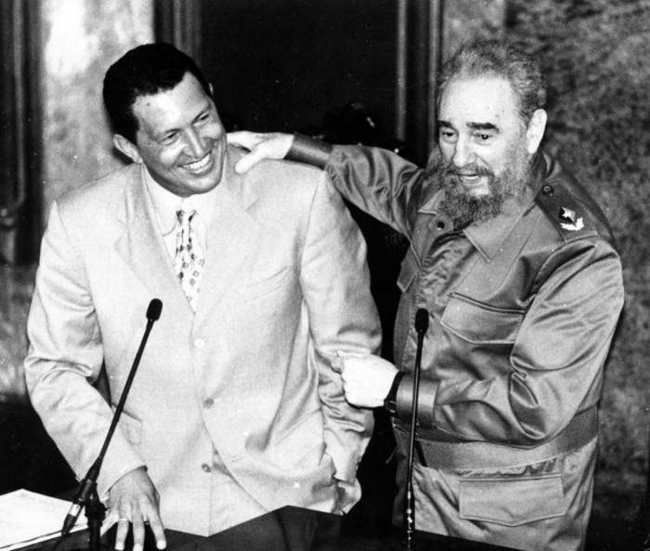 This December 14 marks 22 years since Hugo Chávez’s first visit to Cuba and his encounter with the leader of the Cuban Revolution, Fidel Castro; an event which went beyond a simple friendship between two men, to radically change the face of an entire continent.

“I don’t deserve this honour, I hope to deserve it one day, in the months and years to come,” stated Chávez that December 14 of 1994, who was surprised to have received an invitation to visit the country by Havana City Historian Eusebio Leal, given that he was, after all, the “coup” solider, the man “rejected” by Latin America and the Caribbean.

The Venezuelan leader accepted the invitation, arriving with the dreams of the Liberator of a new stage already underway. He found in Fidel the motivation to move ahead with national independence projects and change the face of Our America.

Meanwhile, a perceptive Fidel, way ahead of his time, saw in the young revolutionary his qualities as an excellent orator, a man committed to his roots and ideas, but above all his passion for history and for Bolívar.

Chávez dazzled the auditorium of people who had gathered in the University of Havana’s Aula Magna to hear him speak hours. On that occasion he noted that this was the first time he had physically visited the historic site, “because, I had come to Cuba many times in my dreams.”

Chávez moved the entire crowd when he described the island as a “fortress of Latin American dignity.” The “heretic” promised to return and lead a revolution in his native Venezuela, which is exactly what he did. Four years later, Chávez won the country’s presidential elections and drove forward a process to transform his nation’s society, economy and culture, an initiative which continues to date: the Bolivarian Revolution.

Throughout this process, the idea shared with Fidel that a better world is possible was translated into solidarity projects with other nations, such as the Bolivarian Alliance for the Peoples of Our America-Peoples’ Trade Agreement (ALBA-TCP), founded 12 years ago.

In 2004, as President of Venezuela, Chávez visited Cuba again. On this occasion the leader of the Cuban Revolution stated, “You promised to return one day with goals and dreams fulfilled. You returned and have become a giant, not only as a leader of your people’s victorious revolutionary process, but also as an important international figure, loved, admired, and respected by millions of people around the world, and by our people in particular.”

In honour of the historic encounter and creation of the ALBA-TCP, an act in solidarity with Venezuela will be held this Wednesday, December 14, at the Havana Convention Centre.