In Cuba, Art is Part of Everything 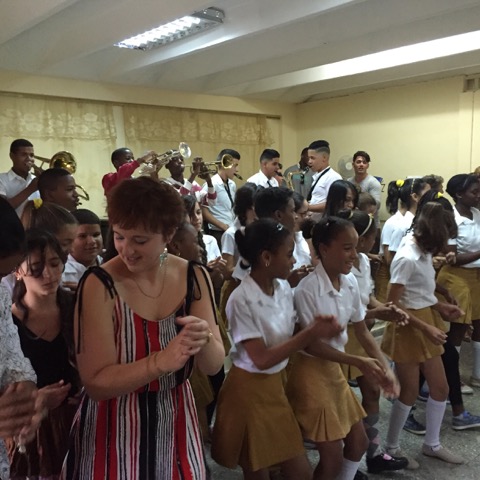 While working-class British kids are denied access to many of the arts in school, Cuban kids have them woven into their national curriculum, writes KAREN PARKIN

IN FRONT of you — a band of strolling musicians with traditional guitars and hand-carved percussion singing folk songs.

Beside you, the exquisite, skilful marquetry of the wooden souvenir “magic” boxes on the pop-up stalls.

Behind you, in the lithe, graceful limbs of the school children spontaneously dancing and effortlessly performing back flips in the public park.

Over your head, in the elaborately, delicately painted ceiling friezes of ornate Spanish-colonial civic buildings and stylish art-deco hotels.

Under your feet, in the Moorish mosaic tiles gracing the floors you walk on. In your ears; a worker on his way to work, striding along purposefully, singing, tunefully…

Nearly 60 years since the revolution, many people are still struggling with poverty but they have a wealth of culture.

In The Ragged Trousered Philanthropists, Robert Tressell wrote: “What I call poverty is when people are not able to secure for themselves all the benefits of civilisation; the necessaries, comforts, pleasures and refinements of life, leisure, books, theatres, pictures, music, holidays, travel, good and beautiful homes, good clothes, good and pleasant food.”

Any Cuban will tell you that there is much more to do before they can say their system has succeeded and for many citizens a number of items on Tressell’s list remain unchecked.

The Cuban people’s response to the historic abstention at the UN by the US and Israel [on Cuba's resolution calling for an end to the US blockade] is that this is only a change of strategy, rather than a change of heart and their fight against the illegal blockade continues as resolute as ever.

But Cubans firmly believe that the route out of poverty for everyone is education. This was a path embarked upon, post revolution, with the 1961 national literacy campaign, spear headed by Fidel Castro and which resulted in their current, world leading literacy rate of 99 per cent.

Their curriculum, as in much of Europe, includes maths, sciences, the humanities, PE and social/ moral education but an equal, if not greater, emphasis is on arts subjects.

Every school we visited — primary, secondary, special or university — welcomed us with a fantastic singing or dancing performance. These were ordinary schools, “ordinary” kids. To them their performances were not extraordinary but simply what they do. Such displays are intrinsic to their education, intrinsic to life.

For us teachers in Britain, however, each demonstration was not only enchanting, but profound.

As arts subjects in the British national curriculum continue to be squeezed out in favour of drilling in “the three Rs,” many of the teachers in our group were moved to tears.

It wasn’t simply the beauty, the joy, the talent or the enthusiasm displayed by these children that overwhelmed us. It wasn’t that their schools — where they sit at rickety desks on wobbly chairs, where they write so beautifully and carefully in homemade exercise books with precious, scarce pencils — were literally crumbling around them.

Nor was it because the school for the visually impaired (who provided the most inspiring and our very favourite musical performance) have had to make do for years with a couple of outmoded and ancient Braille machines.

We wept for our own pupils, back home, the world’s sixth richest economy, where, comparatively speaking, pupils learn in comfortable, wellresourced classrooms yet who are in real danger of missing out almost entirely on an arts education.

Many primary-aged children here are now lucky if they get one music lesson a week, unless of course, parents have the ample means to pay for extra-curricular tuition (all education is free for Cubans of all ages) and dramatic performances in British schools are usually confined to the annual Christmas production.

Art is for everyone and by everyone. It costs the equivalent of a few pence for Cubans to go to the spectacular Ballet Nacional de Cuba (built in 1838) in Havana and half that amount for students. Though wages remain low, these cultural experiences are still very affordable for the majority of people.

The design of the majestic Musea Nacional de Bellas Artes de Cuba gallery in central Havana itself aptly represents Cuba’s approach. The building is a triumph of inclusive, modern architecture — minimalist without being austere, functional yet elegant and welcoming.

The reception is wide and airy, the staff smiling and friendly. “Come on in! Come and share our magnificent culture,” is the feeling here.

A cool, white, undulating walkway gently guides you up three floors of magnificent Cuban artwork, organised in sections of pre and post-revolution and contemporary works.

Few pieces here, if any, are under glass, no laser beam trip alarms, no stern security guards daring you to edge a toe over the line, just the assistants, on hand to help and who delight in answering every question about the sometimes puzzling, often challenging pieces on display.

No metal barriers needed here either. Visitors can get up close to the works. It’s open, it’s inviting, it’s for all the people. The museum is well-maintained, in good repair and could easily defend itself against of any hurricanes the subtropical climate might attack with in the next century.

This is in sharp contrast to many of the city centre homes we saw, which threaten to cave on the next Caribbean sea breeze that sweeps the coastal capital with any serious intention. Many people here are living in poverty, there is no doubt. The walls of many houses and apartments are tumbling onto the ragged pavements. A peep inside the open front doors reveals a few modest pieces of furniture and little else. The slim balconies where residents sit and smoke on balmy Havana nights may or may not have an unsteady handrail between them and a 15-foot drop below. We wondered why the Cubans haven’t already pursued a rigorous programme of housing repair before maintaining and restoring their civic buildings, their art galleries and their theatres.

But it’s in hand. There is a housing restoration programme underway and it’s about prioritising what’s most urgent. In fact, when a home is due to be repaired the Cuban government will temporarily rehouse the families while work is carried out. But like many things here, this takes time. There’s a massive amount of work to do.

Because of the US’s blockade, the Cubans are forced to spend carefully and wisely and education must come first. Public healthcare, again, always free to all Cubans, comes a close second. Furthermore, Cubans know they must develop and strengthen their tourist industry, not only because they need foreign income but also as part of their ongoing commitment to international friendship, cultural exchange and solidarity.

Moreover, it’s amazing what the Cubans have achieved, having had access to so little for so long and their many successes are a tribute to the sheer resilience and determination of the people to rebuild their country. Like the hearts and minds of the Cuban people with this common purpose, everything here is linked together.

Karen Parkin is a primary school teacher in north-west England and the assistant divisional secretary of National Union of Teachers Wigan Division.