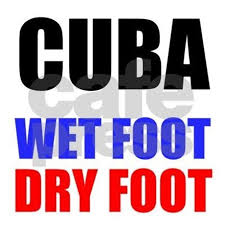 The Obama administration is ending a policy that granted residency to Cubans who arrived in the United States without visas, the White House announced Thursday.

A White House statement said, "The Department of Homeland Security is ending the so-called 'wet-foot/dry foot' policy, which was put in place more than 20 years ago and was designed for a different era. Effective immediately, Cuban nationals who attempt to enter the United States illegally and do not qualify for humanitarian relief will be subject to removal, consistent with U.S. law and enforcement priorities."

It also stated that the Cuban government agreed "to accept the return of Cuban nationals who have been ordered removed, just as it has been accepting the return of migrants interdicted at sea."

The Cuban government has continuously said the policy was a provocation and has demanded its repeal since its original passing in 1966 as the Cuban Adjustment Act and its revision in 1996, saying it enticed and promoted dangerous forms of travel by Cubans.

Immigrants rights groups have often argued that the U.S. policy gave preferential treatment to Cuban migrants. In the White House statement it stated, "By taking this step, we are treating Cuban migrants the same way we treat migrants from other countries."

In a joint statement issued Thursday, Cuba and the U.S. said, "The Republic of Cuba and the United States of America have reached an agreement to take an important step in the normalization of their migration relations, in order to ensure a regular, safe and orderly migration."

"The United States of America and the Republic of Cuba declare their intention to promote changes in their respective immigration laws in order to achieve the full normalization of migration relations between the two countries."

The communique added that both countries would apply their migration and asylum laws in a non-discriminatory manner toward the other and the U.S. would continue to "guarantee legal migration from the Republic of Cuba with a minimum of 20,000 people per year."

Both parties agreed to discourage unlawful and dangerous migration including, "effective bilateral cooperation to prevent and prosecute trafficking in persons, as well as crimes associated with migratory movements which endanger their national security, including the hijacking of aircraft and vessels."

The Cuban government pledged to receive the 2,746 people listed in an earlier agreement and will review on a case by case basis the return of other Cuban nationals.

Cuba and the U.S. have spent several months negotiating the change, an official told AP.

The Department of Homeland Security is also ending a policy for Cuban medical professionals, known as the Cuban Medical Professional Parole Program.

The move to end the residency policy comes just eight days before Obama turns the White House over to Republican Donald Trump, who has said the United States should get more concessions from Havana in exchange for improved relations.