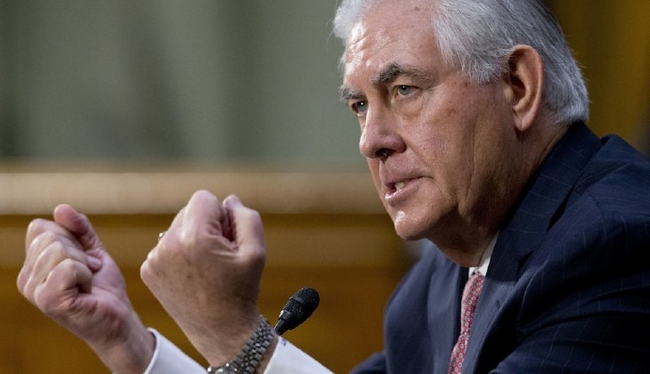 Secretary of State nominee Rex Tillerson said Wednesday that he wouldn't support legislation to end the U.S. embargo against Cuba, a major goal of the Obama administration that now seems likely to go unfulfilled for the next several years.

The Obama administration did all it could to ease trade and travel restrictions against Cuba, but the embargo against the island nation is federal law, and can only be undone through an act of Congress. But Tillerson indicated he wouldn't support any such move on his watch.

"If a bill were to pass Congress that would remove the U.S. embargo against Cuba, and there hasn't been democratic changes on the island of Cuba, would you advise the president to veto a bill that lifted the embargo on Cuba?" Sen. Marco Rubio, R-Fla., asked Tillerson at his confirmation hearing at the Senate Foreign Relations Committee.

"If confirmed, yes I would," Tillerson replied. Later in the hearing, Tillerson reiterated President-elect Trump's assertion that the Cuban government got what it wanted in its negotiations with President Obama, but ordinary Cuban people got nothing in the way of political or human rights reforms.

Tillerson also indicated he was preparing to reassess Obama's regulatory easing against Cuba once he takes office. "I expect a comprehensive review of all those executive orders, and from the State Department perspective," he said.

That includes the possibility of putting Cuba back on the list of countries that sponsor terrorism.

"I would want to examine carefully the criteria under which Cuba was delisted from the list of terrorist nations that support terrorism, and whether or not the delisting was appropriate," he said.