Cuban human rights and the hypocrisy of the media 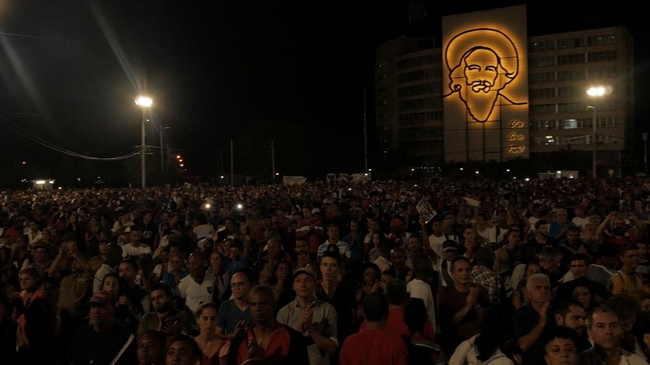 Havana, Cuba - At midnight on November 26, after an uneventful Friday evening, the neighbours called and beckoned me through their front door.

A young Cuban family sat transfixed to the television. Raul Castro appeared on screen, his gruff voice creaking with emotion, and announced: "At 10:29 tonight, the commander-in-chief of the Cuban Revolution, Fidel Castro Ruz, passed away."

Stunned silence filled the room and a tear trickled down the cheek of the woman beside me.

"Even if we're not communists, we Cubans are Fidelistas," she told me.

The death marks the end of an epoch in Cuba. An intensely controversial figure, Fidel Castro's supporters and detractors don't agree on much except perhaps one thing: that his legacy will largely be defined by the question of human rights.

I'm not Cuban, but I have lived in Havana for the last four years, working as a correspondent for various Western media outlets. I think I know the country well. But the strength of emotion surging through the island following Castro's death caught me by surprise.

I'm only one person and, unlike the country's propagandistic state-owned press, I don't claim my voice is the voice of "the people". My experience of Cuba is necessarily a tiny part of it. But I do make an effort to meet people from all walks of life and all stripes of political opinion. The truth is I've found it hard to meet many people who aren't upset about Castro's death.

Sure, a couple of friends and, no doubt, the dissident community surreptitiously opened a bottle of rum to celebrate, but the overwhelming majority of people I met while covering his death - at bus stops, back streets, restaurants and bars - were going through an intense period of collective grieving. Many still are.

On a cool Havana night four days into the period of official mourning, there was a mass rally in Havana's Revolution Square. A nine-storey image of a young Castro was unfurled down the side of a tower block flanking the plaza. It overlooked the hundreds of thousands of people who overflowed the square into the adjoining avenues.

I asked the people I met how they thought Castro would be judged on human rights.

"Where to start?" said Julio Cueta, a 41-year-old taxi driver. "My mum had cancer three years ago and they operated on her for free. How many third world countries can you say that about?"

"If it wasn't for the revolution, I wouldn't be able to study," said Laura Alvarez, 25, wearing a white medic's coat, with "Fidel" written on her cheek in glitter.

A European broadcaster sent me to Santiago de Cuba on the east of the island to cover the funeral. There, I met plenty more people who saw Castro as a progressive figure. Some people even got upset with me when I asked the standard questions about dictatorship, dissidents and human rights abuses.

"The spectrum of human rights is very wide," Lidea Paez, a lecturer in biochemistry, told me as she arrived in Antonio Maceo Square. "But what people like you do," she said pointing at me, "is focus only on the bad parts and ignore the good stuff. And don't twist this interview!"

"If there is one country that respects human rights, it's Cuba," he said. "The right of mothers to give birth safely is guaranteed here, children can study whatever they want at university and they don't pay a penny."

Many prominent Cuban intellectuals, perhaps unsurprisingly, agree that Castro was a towering figure for the advancement of human rights, and that his internationalism helped redefine what human rights meant for the developing world.

Juan Valdes Paz, a professor emeritus of sociology at the University of Havana, argues that any discussion of human rights in Cuba - a former neocolony - has to be seen through the lens of national liberation.

"The revolution's first and most important achievement is something without which everything else - even health and education - would have been impossible: winning the country's sovereignty and independence," he said.

"Ever since the revolution, Cuba has maintained that all human rights are complementary and interdependent. It doesn't make sense to talk about political rights, if citizens are illiterate or if they don't have enough food to guarantee their survival. The Cuban approach is a very third world conception of what human rights are."

Going online, using a dial-up connection, often revealed a strange disconnect between the daily problems Cubans complained about - low salaries, the high price of basic goods - and what the international press focused on - tourism, dissidents, human rights violations. But after Castro's death, things ramped up and going online felt like going through the looking-glass: the same emphasis on human rights was there, but the content and framing could hardly have been more different.

Immediately after Castro died, a lot of coverage from the US focused on reactions from American politicians, such as President-elect Donald Trump, who tweeted: "Fidel Castro is Dead!"

A "brutal dictator who oppressed his own people for nearly six decades," said Trump in his statement. "Fidel Castro's legacy is one of firing squads, theft, unimaginable suffering, poverty and the denial of fundamental human rights."

On the ground, reporting from Cuba, also jarred with my experience. In a widely propagated newswire, the Associated Press reported that thousands of people had been "sent in groups by the communist government" to the rally in Havana's Revolution Square that I'd attended, implying that the state had been shunting about a docile population against its will.

Yet everyone I spoke to that night insisted they were there voluntarily. When I'd asked two school kids what would happen if they hadn't turned up, they shrugged and said they could perfectly well have stayed at home - just like their friends.

But I found the biggest chasm between Cuban reality and the digital world to be in mainstream editorials. The line taken by the liberal press is epitomised by the Washington Post's editorial: "Fidel Castro's terrible legacy."

"Mr Castro's political repression reached an extreme that would have made his predecessor, Fulgencio Batista, blush," the editorial read.

"It began with mass summary executions of Batista officials and soon progressed to internment of thousands of gay men and lesbians; systemic, block-by-block surveillance of the entire citizenry … and punishment for dissident artists, writers and journalists."

Arguing that Castro was more repressive than his predecessor seems a stretch. As then US senator John F Kennedy stated back in 1960, "Fulgencio Batista murdered 20,000 Cubans in seven years - a greater proportion of the Cuban population than the proportion of Americans who died in both World Wars, and he turned democratic Cuba into a complete police state - destroying every individual liberty. In 1959, by far the bloodiest year of the revolution, up to 500 people were executed."

Many of the facts the editorial points to are true, but readers are given little context.

This editorial, like others in leading American newspapers I've read, doesn't fully consider how US policy towards Cuba may have affected the Cuban state's position on civil liberties.

Dr Francisco Dominguez, head of the Latin American Studies Research Group at Middlesex University, believes there is a link.

"Cuba faces a hostile, aggressive and extremely powerful enemy, which has been trying to destroy the revolution using absolutely every imaginable means," he says.

"Given that, for over 50 years, the United States has demonstrated it's prepared to resort to the assassination of the Cuban Revolution's leaders, chemical and biological warfare and even military invasion, there is no reason for Cuba not to take all the necessary measures to defend the nation, its people and its self-determination."

News consumers may or may not agree with such national security arguments - but, in order to make up their minds, they at least need to hear them.

The Washington Post does give Castro some credit. "Under his rule, too, Cuban public health and literacy indicators were significantly better than those of many other Latin American states … For those 'achievements,' however, the Cuban people paid a terrible price," it says.

But unlike human rights violations, to which extensive column inches are devoted, the editorial is loath to give concrete examples of these, as they dub them in scare quotes, "achievements".

During my time in Cuba, I've gleaned other reasons why Western media coverage of human rights in Cuba is so different.

Editorial line plays a big role. For example, every news channel I've worked for here has wanted to cover the dissidents - people who are routinely arrested and detained for protesting against the regime.

The irony is that the political opposition aren't taken seriously by most people on the island. As one US cable released by Wikileaks put it: "We see very little evidence that the mainline dissident organisations have much resonance among ordinary Cubans."

Even Cubans who hate the Castros joke that the first thing the Ladies in White do after their weekly protest is go to the shopping mall to spend the money they've been sent from Miami.

Yet, as a journalist earning a living here, I've been assigned to interview dissidents for foreign outlets. The upshot is that viewers get an exaggerated sense of the weight dissidents carry on the island.

One might also consider how the US embargo, which remains in place despite having been eased by Obama, has hardly been mentioned during these past weeks.

Designed to cause "rising discomfort among hungry Cubans" and overthrow the regime, the sanctions still prevent Cubans from accessing vital medicines. It costs lives. But it's seldom characterised as a human rights violation by the media.

"It would be wonderful if the Western media did take a genuine interest in human rights in Cuba," says Cuban sociologist Juan Valdes Paz.

Another, perhaps simpler, reason why I think foreign media struggle to get a proper handle on the human rights issue could be seen in who came to cover Castro's death: journalists who are predominantly white, many privately educated, and overwhelmingly from developed, wealthy countries.

While covering Castro's death, I ate in some of the island's flashier hotels and restaurants, all paid on expenses. The problem of putting a nourishing meal on the table the next day - an issue at the forefront of many Cuban minds - couldn't have been more distant. This gulf in economic possibilities makes it difficult for many Western journalists to appreciate the daily centrality of food security, running water, electricity and housing as "human rights".

But there should be no pick-and-mix approach: advances and violations of human rights should be reported regardless of who is responsible.

By approaching this issue selectively, rather than universally, the Western media cast aspersions on their own integrity. They also come off as no less Orwellian than the Cuba under Fidel Castro they so ridicule.

The views expressed in this article are the author's own and do not necessarily reflect Al Jazeera's editorial policy.