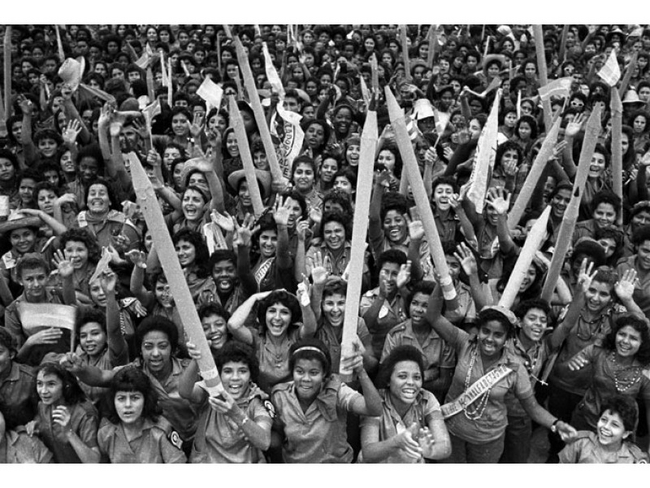 Cuba’s literacy campaign was one of the major achievements of the revolution. Its success continues today, writes SUSAN PIPER

IT reads like a fairy story. Thousands of young, eager volunteers armed only with books, pencils and gas lamps venturing inland to the Cuban countryside with one common aim: to teach their fellow countrymen and women how to read and write. This was the reality of the 1961 Literacy Campaign, and one which, since my return from the island, I have become so fascinated by.

From the moment we were greeted by the wonderfully enthusiastic director of the Museum of the Literacy Campaign, I knew I was hooked on hearing more about this ground-breaking campaign initiated by the success of the revolution.

Fidel Castro famously said in a speech to the United Nations general assembly in September 1960: “In the coming year, our people intend to fight the great battle of illiteracy, with the ambitious goal of teaching every single inhabitant of the country to read and write in one year.”

This wasn’t just a whimsical political statement. This was an all-out offensive against illiteracy.

In November of that year it was discovered that over a million Cubans could not read or write.
Schools were suspended and within months the Cuban government mobilised thousands of young people, teenagers and teachers to travel to the countryside to live and work among the peasant farmers, so wilfully neglected by the Batista regime.

Teachers were paid to supervise and train the young volunteers named Brigadistas over a two-week period. Life was hard in the fields and the Brigadistas were expected to help during the day and teach in the evening.

The real-life human stories of the campaign amazed me; the youngest Brigadista was just eight years old and the oldest student 104.

The many letters written to Fidel after the campaign can still be seen today in a museum called the City of Liberty in Havana. The campaign had its critics, however. Many families were concerned for the welfare of their young people as counter-revolutionary action was never far away and sadly some teachers were murdered by insurgents.

On January 5 1961 Conrado Benitez was killed by counter-revolutionaries in the Escambray region. In November that year a 16-year-old boy, Manuel Ascunce, was murdered along with the father of his host family, Pedro Lantigua. The campaign marked an important turning point for the revolution — it brought city and countryside together and challenged discrimination of women and black people. The end of the campaign was celebrated on December 22 1961 with a “rally of the pencils” outside the National Library at the Plaza de la Revolucion in Havana. The illiteracy rate had been slashed from 25 per cent to less than 4 per cent within a year.

So why was this campaign so successful? The materials were basic (two text books were used: We shall Read and We shall Conquer). Was it the willingness of the thousands of volunteers determined to make a difference in the post-revolutionary years and months?

Educationalist Theodore Macdonald believes that people were convinced of the need to read and write, not just for their own sakes, but for the good of the country. He said: “The genius of the Cuban campaign was that they made it make a difference.

“It wasn’t just about peasants becoming literate; it was about learning to read so they could join in politically and socially: there was a point to it. And then they wanted more.”

Indeed, after the campaign many pursued education further and the government made this possible. Within months, a programme was set up for the new literates to continue studying.

Teacher-training was reformed and thousands of classrooms built; primary and pre-school education was almost universally available in Cuba by 1970. The literacy campaign became one of the major achievements of the revolution and Cuba continues to send thousands of teachers to countries in need. The Yes I Can teaching method has been adopted by 15 countries and is recognised by Unesco.

So what can teachers in Britain learn from this? The lessons of the campaign are vitally important for teachers today. We often think of illiteracy as a problem which has been eradicated, however, according to Unesco, about 1 billion people — or 26 per cent of the world’s adult population — remain non-literate.

We know from the campaign and thereafter that when education is made a priority, then great outcomes can be achieved.

Cuba continues to have a high literacy rate — comparable to many Western developed nations. Many believe this is down to highly trained teachers working in a fully funded state system (there are no private schools in Cuba). Thirteen per cent of GDP is spent on education in Cuba compared with 4 per cent in Britain.

Also, it is fair to deduce that when our schools are constantly used as political footballs and education policy changes according to the whims of various education ministers, then both teachers and pupils pay the price. Moreover, when we take into account how fragmented our education system is becoming with the introduction of more academies, free schools and grammars — alongside the maintained and private sector — it’s not difficult to see why the Cuban system is so successful.

There is also a wonderful sense of community with Cuba’s education system; there’s a real sense of giving back.

One of the representatives of the University Students’ Union we met when asked about how much debt English students can accumulate in three years of being at university shook his head and said: “The only debt I will owe is to my country.”

Jose Marti’s principle of “literacy without borders” was certainly a rallying call for the Cubans after the revolution and one which fuels their immense spirit of internationalism today.

Recently, Cuban Education Minister Ena Elsa Velaquez said at a conference in Paris that political will is the key to eradicate illiteracy in today’s world and that education can be guaranteed for everyone when governments consider it a priority. She said: “Our education system is truly inclusive because we look for ways to reach everyone.”