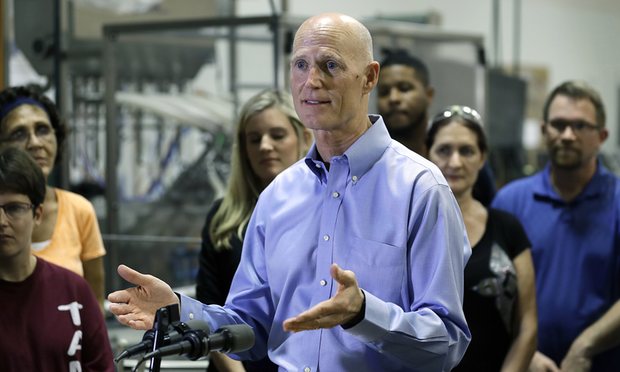 Governor Rick Scott of Florida, appears to be following Donald Trump’s example of dictating policy by Twitter, with potentially far-reaching impacts for the future of US-Cuba relations.

In three simple tweets, Scott threatened to choke state funding from any Florida port that worked with Cuba. Almost immediately, two of them, Port Everglades and the Port of Palm Beach, cancelled the signing of memorandums of understanding with visiting Cuban trade officials.

Just as Trump has converted his own social media thoughts into hard policy by way of executive order, Scott this week followed up the tweets in his proposed formal budget to state lawmakers. One clause of the 362-page document states there should be no state money for any Florida port where infrastructure improvements would “result in the expansion of trade with the Cuban dictatorship because of their continued human rights abuses”.

The Florida legislature will debate the budget, which includes a $177m allocation for port upgrades, next month.

Analysts suggest that Scott, who was conspicuously quiet last year when Florida’s airports resumed direct flights to Cuba for the first time in half a century, feels emboldened by Trump’s election, and is aligning himself with what is likely to be a tougher approach by the White House to relations with Havana.

“He was close to the Trump campaign, he sees himself as a Trump man, and the use of Twitter is Trumpesque,” said Sebastian Arcos, associate director of the Cuban Research Institute at Miami’s Florida International University.

“It signals that the intent of the administration, because the governor of Florida has been very close to it, is to have a policy less friendly [towards Cuba] than the one President Obama implemented in 2014.

“The new administration has signalled it will take a different tack and is not going to be as open to business as the Obama administration was. It might be that Florida is at the lead of what’s going to happen with other states.”

Florida’s direct trade links with Cuba have been expanding since Obama and the Cuban president, Raúl Castro, agreed in December 2014 to normalise relations between the countries following more than 50 years of hostility. As well as the restoration of scheduled air travel, US cruise ships are returning to Cuban ports and Americans can again legally purchase certain Cuban goods, famously cigars and rum.

A formal five-decades-old trade embargo, however, remains in place and can only be lifted by Congress. Trump has indicated a more hardline approach, tweeting in November, following the death of the Cuban leader Fidel Castro, that he was prepared to “terminate” the Obama-led thaw if Cuba did not “make a better deal”.

Chief executive Steve Cernak said Port Everglades was “a landlord port” in which its tenants, and not the port itself, conducted business with Cuba. Even so, he said he would accede to the governor’s request to stop short of any written understanding with the communist country.

The port’s largest tenant, Crowley Maritime, has held a US government licence for regular cargo voyages to Havana for 15 years and as a private-sector company takes no money from the state.

A port spokeswoman, Andrea Kennedy, told the Guardian that planned infrastructure upgrades at Port Everglades were aimed at improving trade with European, South American and other Caribbean nations. The port expects to receive about $125m in state funds over the next five years.

The Florida Ports Council, meanwhile, said it “continuously monitors” new opportunities but saw limited scope for any expansion of trade with Cuba.

“Serious political and social challenges need to be addressed before Florida can participate in free and open trade with Cuba,” its chief executive, Doug Wheeler, said in a statement.

Some observers link Scott’s actions to a widely expected run for the US Senate when his term as Florida governor ends next year. The Cuban-born writer Fabiola Santiago used her Miami Herald column to accuse Scott of a “publicity stunt” and to point out that his fellow Republicans in Texas were already actively encouraging business with Cuba through the port of Houston.

Scott’s office did not respond to a request from the Guardian for comment.