Based on an article in the Miami Herald | Friday, 17 February 2017 | Click here for original article 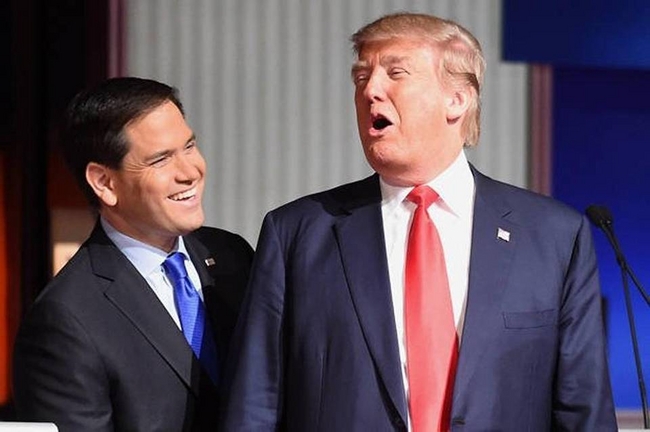 US President Donald Trump suggested during a press conference on Thursday that he shares Florida Republican Senator Marco Rubio’s views on Cuba.

Marco Rubio is a hard line, pro-blockade Florida Senator, who has been a vocal critic of re-establishing diplomatic relations with Cuba and is a staunch supporter of US intervention in Cuba.

“We should reinforce our longstanding policy”, Rubio said in the presidential elections, and stressed that he would reverse any changes in policy that took place under the Obama administration.

“We had dinner with Senator Rubio and his wife, who was by the way, lovely, and we had a very good discussion about Cuba because we have very similar views on Cuba,” Trump told journalists, according to the Miami Herald.

“Cuba has been very good to me, in the Florida elections, you know, the Cuban people, Americans,” he added, suggesting strong support from Cuban American voters (although he reportedly performed worse than any other Republican candidate in history in Miami's majority-Cuban-American neighbourhoods.)

The comment suggests a possible change in Cuba policy since Rubio was one of the staunchest critics of former President Barack Obama’s engagement with Cuba. The White House Spokesman Sean Spicer recently said that the Cuba policy was under review.

During his presidential campaign, Trump originally said that he would negotiate a “better deal” with the Cuban government, but later changed his position during a rally in Miami, where he threatened to reverse Obama’s measures.

“All of the concessions that Barack Obama has granted the Castro Regime were done through executive order, which means the next president can reverse them – and that is what I will do, unless the Castro Regime meets our demands", Trump said in October.

The Miami Herald reported earlier this week that the anti-Cuba Florida politicians have high hopes for the Trump administration as they seek a return to exercising huge influence on US foreign policy on Cuba, despite the majority of the US public supporting the re-establishment of diplomatic relations and an end to the US blockade.

"We have had more conversations with high-level Trump officials than we had in eight years of the Obama administration," Rep. Mario Diaz-Balart said.

Article based on a Miami Herald report, with additional content added.