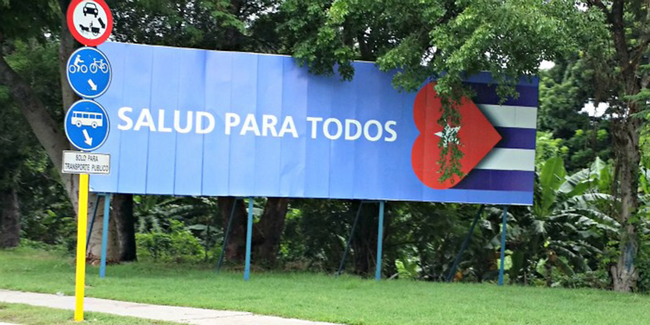 The Cuba Solidarity Campaign (CSC) in conjunction with the Morning Star and Nottingham Central Unite the Union are organising a public meeting on healthcare in Cuba.

The health service in Cuba is one of the most outstanding achievements of the revolution.

Not only has it created a situation in which the population of Cuba has one of the highest life expectancies of anywhere in the western hemisphere, the skill of Cuban medical staff has been deployed in many other countries to combat medical emergencies such as the recent Ebola epidemic in west Africa.

The World Health Organisation (WHO) has just granted the Doctor Lee Jong-wook Memorial Prize for Public Health to the Cuban Henry Reeve International Contingent of Doctors Specialised in Disasters and Serious Epidemics.

So why is this important? It’s all about solidarity, real solidarity.

The Henry Reeve Contingent was created by the Cuban revolution leader Fidel Castro on September 19, 2005 and over 7,000 of its members have provided aid in almost 20 nations including Haiti and Chile and Pakistan following a devastating earthquake, treating over 3.5 million people. Let’s go back to where it all began in 1959.

With the triumph of the revolution, Cuba had a problem: half of its doctors had left for the US. Around 3,000 stayed and helped train the next generation of healthcare professionals.

Commenting on the state of the health system 10 years after the revolution, Fidel said problems included: “The absence of a national public health plan; semi-official and private services that were better than those provided by the government; an orientation toward curative medicine; abandonment of rural and some urban areas; individual medicine; mercantilism; competition between private services; administrative centralisation with a public unaware of treatments that could benefit them.”

The idea of revolutionaries and progressives taking their cue from the state of health inequality is not new.

Notable examples include Ernesto “Che” Guevara, the Argentine, who saw terrible poverty with no access for the poor to health provision in his country; Norman Bethune, the Canadian communist who went to Republican Spain and later to China and treated soldiers and the rural poor and was recognised by none other than Mao Zedong and our own Nye Bevan, who was so influential in creating the NHS.

So how is healthcare in Cuba? At the beginning of 2009, I went to Cuba with others from our Cuba Solidarity Group in Nottingham.

Two things really struck me from that visit. The first was a tour of the local health centre in central Havana. There were three doctors who served the local area, one for about 300 people. On the wall there were lists of patients to be visited or monitored including a list for those “apparently well” — these would be chased up for vaccinations or other preventative interventions, including home visits. We can only dream of that here in the fifth largest economy of the world.

The second was a visit in Santa Clara to the centre for veterans. These veterans included those who fought in the Democratic Republic of Congo and Angola but also teachers involved in the “Yes, I Can” literacy campaign and the medical brigades. So unlike here in Britain, veterans are not just military.

So why is our solidarity important? As CSC director Rob Miller has said, we cannot expect Trump to improve things any time soon.

Miller said: “In February 2016, a branch of the British Standard Chartered Bank in Uganda informed Cuban doctors working at Mbarara University of Science and Technology that they had to withdraw their money due to the fact that, as Cubans, they were not able to continue holding accounts in said bank.

“The university suggested that the Cubans open accounts in the British bank Barclays. After they did so, the bank advised them that they would not be able to make any transactions to or from Cuba.”

In order for us to help Cuban medics help everyone else, we must oppose this blockade. Join CSC, get your union branch to affiliate, travel to Cuba with CSC or join a solidarity brigade.