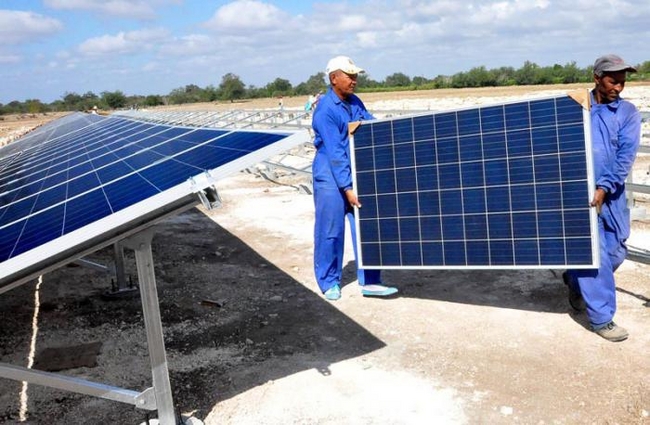 Once operational, the four solar parks will represent a saving of some 21,000 tons of fossil fuel for the country

GRANMA.— The first fully operational solar park in this eastern province and the ongoing construction of three new ones, are set to see Granma’s contribution to the national electric grid increase six fold by mid-2017, supplying 14 megawatts (MW) of power and representing a savings of some 21,000 tons of fossil fuel for the country.

The Ministry of Construction and provincial Electric Enterprise are working together to install a second park, which will feature 9,600 solar panels with a capacity of 2.2MW, located in the Yarey region, within the municipality of Jiguaní, close to another facility of this kind, which has been operating since last December.

Works are underway in Jiguaní and Cauto Cristo to build two other parks, operating with Chinese technology and twice the generating capacity (17,600 panels for 8.8MW combined) of those in El Yarey, which feature nationally produced components, according to representatives from the Electric Enterprise in Granma.

Regis Fernández, the entity’s director of investment, stated that at the current rate, the three solar parks under construction will be up and running by June 30, 2017, noting that 17 million of this year’s 20 million peso investment plan has been dedicated to these important projects; which are evidence of Cuba’s concerted effort to expand the use of renewable energy on the island.

In addition to the clear economic and environmental benefits of this modern form of clean, efficient energy production, Jiguaní is also proof of the positive impact of these technologies on local communities, with the three parks able to supply all the municipality’s power in exceptional circumstances.

Jesús Darío Bárzaga, a representative from the Electric Enterprise in Granma, explained that although these systems feed directly into the national grid, in the event of interruptions due to weather, technological, or other such reasons, the facilities can be disconnected from the central line, and function independently to generate the almost nine MW of power Jiguaní needs.

Antonio Baró, regional president of the Cubasolar society and head of the Photovoltaic Park Installation group, highlighted that the province has completed all the necessary documentation and identified 16 new areas on which to build similar facilities in the future.

Given its geographic location as the region with the highest proven levels of solar radiation, Granma has the potential to become a national reference for solar technology, according to Antonio Baró, who noted, “A photovoltaic kilowatt of power, installed here, can supply 1.7 MW hours in a year.”

With a long way still to go before reaching its full potential in regards to renewable energy sources, such facilities are expanding across the province, where there already exist 1,026 windmills; 251 biogas digesters; over 400 solar heaters; 1,823 solar panels fitted on homes and institutions in remote areas; as well as other alterative systems which this June will be added to the 54,400 panels set to be connected to the national grid.