The US blockade remains in place 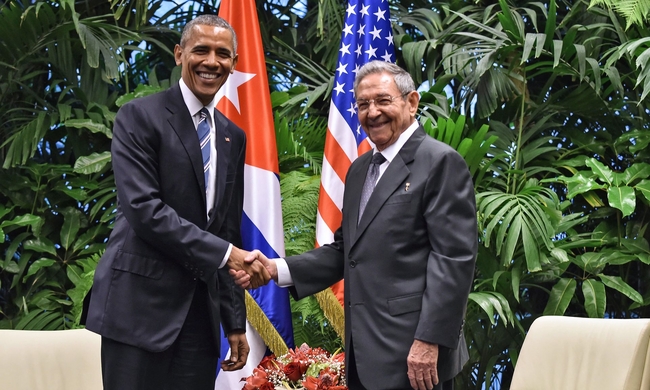 One year on from Obama's historic visit, and 55 years after its introduction, the US blockade remains in place.

One year ago today, 21 March 2016, Barack Obama became the first sitting US President to visit Cuba in 88 years.

During the historic visit, Obama met with Raul Castro, where his Cuban counterpart reaffirmed Cuba’s call for the US to end the ongoing blockade:

“The blockade is the most significant impediment for the development of the Cuban people, that is why its elimination is essential for the normalisation of relations,” the Cuban President said.

However, one year on from this historic visit, and 55 years after its introduction, the US blockade remains in place.

According to Cuba’s latest report to the United Nations, the blockade has cost the Cuban economy over $753 billion since its introduction. Obama did not suggest that the blockade should be lifted due to compassion for the Cuban people, who have suffered under the brutal US policy for over five decades. He instead said that the blockade was “not working” to advance US interests – a move that highlighted a change in tactics, rather than a change of goals, under his administration.

The US goal in Cuba continues to be regime change. Just three days after Obama left Cuba, the US State Department allocated a further $753,989 towards “young emerging leaders from Cuban civil society”. This is just one of a number of US regime change activities.

The Obama administration achieved various small steps of progress, including re-establishing diplomatic relations, ending the ‘wet-foot, dry-foot’ immigration policy, and resuming direct flights and postal services between the US and Cuba – but crucially, the blockade remains in place and Guantánamo Bay continues to be illegally occupied by the US.

The Trump administration is currently reviewing their Cuba policy. Whilst it is still early to predict Trump’s position on Cuba, he threatened to roll back the limited changes that took place under Obama during his election campaign and has since given roles in his administration to some key pro-blockade lobbyists.

Whatever position Trump takes, Cuba Solidarity Campaign’s priorities are the same; end the US blockade once and for all and return the occupied territory of Guantánamo Bay to Cuba.