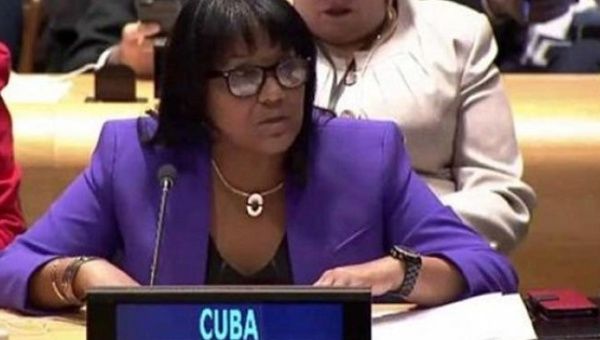 UNITED NATIONS.– Cuba called for the commitment of all states to the total elimination of nuclear weapons this Monday, March 27, as the only way to eradicate the threat they pose to human survival.

Speaking on the opening day of the United Nations Conference on Legally Binding Instrument Leading towards Total Elimination of Nuclear Weapons, the island’s Permanent Representative to the UN, Anayansi Rodríguez, stressed that the current situation is unacceptable, marked by the existence of more than 15,000 nuclear warheads.

“Their use or the threat of their use, under any circumstances, would constitute, according to the advisory opinion of the International Court of Justice, a violation of international law and a crime against humanity. However, nuclear weapons are the only weapons of mass destruction that have not yet been banned through a legally binding instrument,” she warned.

According to the Cuban Ambassador, while such an instrument alone would not lead to total disarmament, it would codify in international law the illegitimacy and illegality of nuclear weapons, help to establish rules and regulations to facilitate their elimination, and strengthen the disarmament and non-proliferation regime.

This prohibition mechanism should be as clear and complete as possible, to lead to total eradication, she insisted.

During her speech, the Cuban diplomat also urged for the incorporation of specific requirements for those countries possessing nuclear arms, such as the destruction within a defined time period of their available arsenal, and a ban on the further production of fissile material for the manufacture of such weapons.

According to Rodríguez, another key element would be for these states to provide secure, universal, unconditional and legally binding guarantees that they will not use nuclear weapons, as long as they have them, against the nations that form part of the mechanism.

She also called for the inclusion of the right to research, develop and use nuclear energy for peaceful purposes, in the legally binding instrument to be drafted.

Cuba calls on all UN member states to join these negotiations and demonstrate a true commitment and political will, with the goal of achieving a world free of nuclear weapons, Rodríguez concluded.