Trump to reveal Cuba policy in Miami next Friday 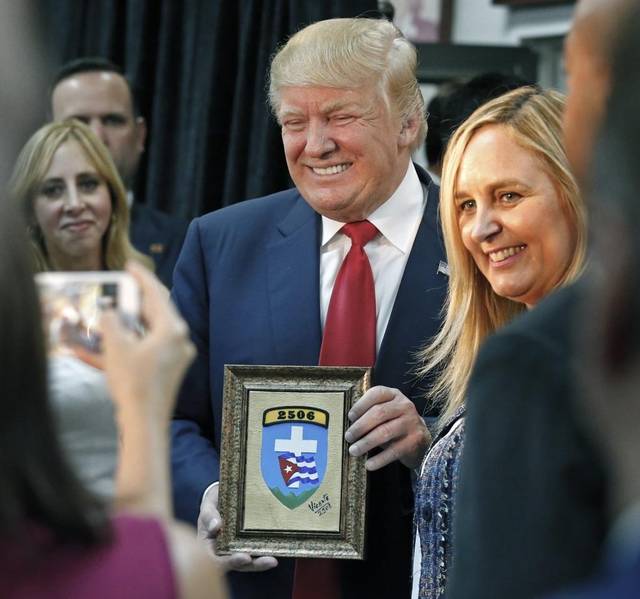 Donald Trump receives the Shield of Brigade 2506 at the Bay of Pigs Museum in Miami on Oct. 25 2016 as presidential candidate

President Donald Trump will travel to Miami next Friday to announce his administration’s changes to U.S.-Cuba policy, a source with knowledge of the president’s plans told the Miami Herald.

The location for the event is still in the works. But scheduling the trip indicates the Cuba policy, which has been undergoing drafts for several weeks, will be imminently finalized. And deciding to unveil the policy in Miami suggests it will please the hardline Cuban exiles whose support Trump considered significant to winning Florida, and the presidency.

Vice President Mike Pence is also expected to attend. He will already be in town for a Central America conference to be held next Thursday and Friday at Florida International University and U.S. Southern Command. Three Cabinet secretaries — Rex Tillerson of State, John Kelly of Homeland Security and Steven Mnuchin of Treasury — will take part in the conference, but Tillerson plans to depart Thursday, and it’s not clear if Kelly and Mnuchin will take part in the Cuba policy event.

Several local venues have symbolism for Cuban Americans, including the Bay of Pigs Museum in Little Havana and the Freedom Tower in downtown Miami.

A mid-June Trump visit has been rumored since Memorial Day, when word of the Cuba policy rewrite began trickling from alarmed backers of former President Barack Obama’s reengagement approach toward the communist island. Trump is preparing to tighten at least some of Obama’s changes, including restricting business with the Cuban military and U.S. travel that resembles tourism.

Those type of revisions have been endorsed by Florida Sen. Marco Rubio and Miami Rep. Mario Diaz-Balart, the only two local GOP members of Congress who backed Trump and as a result have pressured his administration on the issue. Rubio in particular has been working closely with the White House and National Security Council on the upcoming changes.

“I am absolutely confident that the president is going to deliver on his word, on his commitments,” Diaz-Balart told the Miami Herald and el Nuevo Herald in a recent interview. “He was very clear that he thought that President Obama in essence got nothing in exchange for the concessions he gave to the Castro regime.”

Members of Congress who favor closer U.S.-Cuba ties have urged Trump to maintain Obama’s approach. On Thursday, seven Republican lawmakers from outside Florida whose districts see agricultural, industrial or commercial opportunities in Cuba wrote Trump to argue that keeping a foothold Cuba is important for U.S. national security. Three GOP senators with similar views made a similar plea to Tillerson and National Security Adviser Henry McMaster.

Two weeks before Election Day, Trump received an endorsementfrom the Brigade 2506 veterans at the Bay of Pigs Museum, a show of support that came after Trump had pledged at a local rally to “reverse” Obama’s Cuba policy. As president, Trump has privately brought up the Bay of Pigs Museum event to Florida Republicans as a key moment for his campaign, though his criticshave disputed that the Cuban-American vote won Trump the presidency.

Donald Trump spoke to the Cuban American National Foundation in 1999, casting himself as a pro-embargo hardliner who refused to do potentially lucrative business in Cuba until Fidel Castro was gone. Keyframe photo by Tim Chapman of Donald Trump as he blasts Fidel Castro and says we need to keep the embargo on Cuba while at the Bay of Pigs Association in Little Havana, on Nov. 15, 1999.

Trump lost blue Miami-Dade County by 29 percentage points, and an FIU poll from September showed 56 percent of local Cuban-Americans favored more engagement with the island. Despite a gradual shift away from the hardline position, older Cuban-American voters remain a reliable Republican base.

Fidel Castro’s death, less than three weeks after Trump’s victory, was met with harsh rhetoric from the president-elect and his transition team, giving hardliners hope that a Cuba policy shift was forthcoming.

“Fidel Castro’s legacy is one of firing squads, theft, unimaginable suffering, poverty and the denial of fundamental human rights,” Trump said in a statement after Castro’s death. “I join the many Cuban Americans who supported me so greatly in the presidential campaign, including the Brigade 2506 Veterans Association that endorsed me, with the hope of one day soon seeing a free Cuba.”

With no major legislative victories to date, the White House has tried to deliver to its political base on executive promises. Trump’s executive orders and policy directives have given him a chance to leave the confines of Washington to bask among supporters.

His Miami trip would be Trump’s first as president; despite repeated visits to his Mar-a-Lago estate in Palm Beach before the summer, he never made it south to his Trump National Doral golf resort.