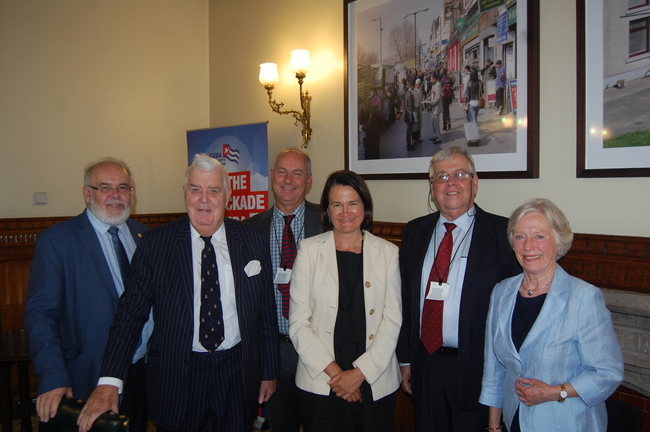 Dr Carlos Alzugaray, former Cuban diplomat, writer and academic was invited by Cuba Solidarity Campaign (CSC) for a series of high level meetings with parliamentarians and trade unionists, and public meetings, where he gave an update on Cuba-US relations following the change in Cuba policy recently announced by President Trump in Miami.

In a brief but busy visit, Dr Alzugaray, an expert on Cuba-US relations, spoke to MPs, academics and trade union representatives at an All-Party Parliamentary Group (APPG) on Cuba briefing session in Westminster; addressed the Scottish Parliament Cross Party Group on Cuba in Holyrood; met with and the Labour Group at Edinburgh City Council and took part in public meetings.

His tour coincided with the Donald Trump’s new Cuba policy announcement so he was able to give his analysis on this as well as an update on the Cuban economy and the long term future of US-Cuba relations.

Reminding everyone that the blockade was still firmly in place and Obama had only tinkered with it, Dr Alzugaray suggested that Trump’s new Cuba policy is contradictory and full of old Cold War anti-Cuba rhetoric. As an example he cited the “people to people” travel, introduced by Obama and ended by Trump. “The irony is that in stopping the individual US traveller, who stays in casas particulares (guest houses), he is stopping funding to the Cuban private sector” – the exact sector he claimed he wanted to support.

Stressing the huge potential for Cuba’s tourism market if the blockade was lifted, Alzugaray compared the 1.5 million Canadians (3.5 per cent of the population) who visited Cuba each year to the much smaller number of US citizens currently able to travel there. If 3.5 per cent of “US citizens could travel freely to Cuba like Canadians, this could potentially result in up to 15 million US tourists annually. The total number of tourists that Cuba receives from all nations each year is a total of 4 million, so the impact on our economy would be very significant”, he explained.

Despite the setback of Trump’s new measures, Cuba continued to update its economy, where changes were taking place “in the most democratic way possible, with tens of thousands of meetings taking place with millions of Cubans in attendance, who can participate and make amendments” to the plans, he said.

He made it clear that “the economic reforms that are taking place in Cuba aim to preserve gains in health, education and social welfare - which are an inspiration not only to the Third World but First World, too.”

Whatever happens, he told parliamentarians, Cuba is prepared for Trump’s new policy towards the island: “No matter what difficulties we have faced in Cuba – the blockade, invasion, US interference, the Special Period – we have overcome them. So we are ready,” he concluded.

"The US blockade policies are punishment for Cuba for achieving its independence in 1959,” Alzugaray said.

“We must remember the original motives of the blockade; to create hunger, desperation and the overthrowing of the Cuban government. But this didn’t happen, as the Cuban people have resisted.

"The US treats Cuba differently to other countries. If you look back throughout history, from the nineteenth century, the Platt Amendment, and Batista’s dictatorship - the US ruling class has always wanted to control Cuba", he said.

CSC Director Rob Miller said "The blockade legislation impacts us in Britain too. CSC had our Co-operative Bank accounts closed and many other banks and companies have had fines over the years including Barclays, RBS amongst others.

“In Cuba there was a real optimism following Obama’s move towards normalisation, but now with Trump that optimism has gone”, he added.

Miriam Palacios gave an insight into the blockade policies affecting Cubans overseas: "The extraterritorial nature of the US blockade impacts on Cubans all over the world, including discrimination in Britain.

Dr Francisco Dominguez suggested that US domestic issues were contributing to Trump’s new Cuba policy, with the President forced to appease hardline Republicans on Cuba in order to gain support for legislation he was struggling to pass.

"We need to continue to fight to end the US blockade and return Guantánamo to Cuba, despite Trump's new anti-Cuba rhetoric", he stressed.

Elaine Smith MSP, Convenor of the Scottish Cross Party Group (CPG) on Cuba welcomed Carlos to the Scottish Parliament on 28 June. Several Members of the Scottish Parliament, including Vice Convener, Neil Findlay MSP, were in attendance to hear his thoughts on Cuba’s future. He spoke of the need to strengthen the economy, challenge bureaucracy and develop the role of the private sector whilst crucially protecting the social achievements of the Revolution.

The Cross Party Group on Cuba was one of the first CPG’s to be set up in the Scottish Parliament when it was established in 1999 and has been running ever since.

Dr Alzugaray joins a long line of Cuban speakers who have addressed the group over the years, including the family of the Miami Five, Aleida Guevara, academics and journalists, and Cuban ambassadors to the UK.