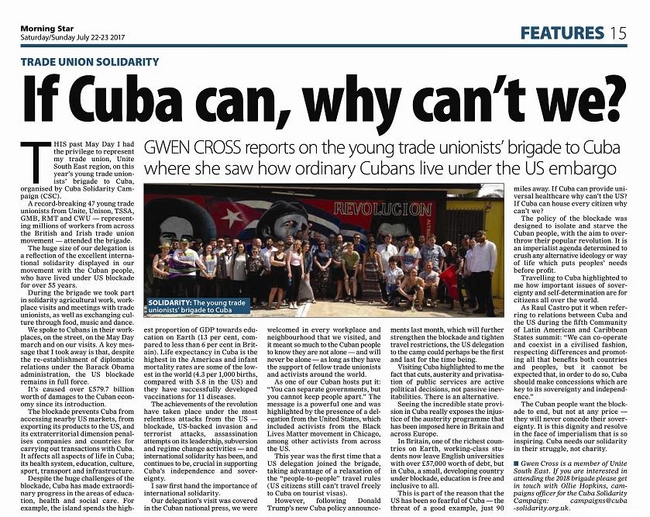 THIS past May Day I had the privilege to represent my trade union, Unite South East region, on this year’s young trade unionists’ brigade to Cuba, organised by Cuba Solidarity Campaign (CSC).

A record-breaking 47 young trade unionists from Unite, Unison, TSSA, GMB, RMT and CWU — representing millions of workers from across the British and Irish trade union movement — attended the brigade.

The huge size of our delegation is a reflection of the excellent international solidarity displayed in our movement with the Cuban people, who have lived under US blockade for over 55 years.
During the brigade we took part in solidarity agricultural work, workplace visits and meetings with trade unionists, as well as exchanging culture through food, music and dance.

We spoke to Cubans in their workplaces, on the street, on the May Day march and on our visits. A key message that I took away is that, despite the re-establishment of diplomatic relations under the Barack Obama administration, the US blockade remains in full force.
It’s caused over £579.7 billion worth of damages to the Cuban economy since its introduction.

The blockade prevents Cuba from accessing nearby US markets, from exporting its products to the US, and its extraterritorial dimension penalises companies and countries for carrying out transactions with Cuba. It affects all aspects of life in Cuba; its health system, education, culture, sport, transport and infrastructure.

Despite the huge challenges of the blockade, Cuba has made extraordinary progress in the areas of education, health and social care. For example, the island spends the highest proportion of GDP towards education on Earth (13 per cent, compared to less than 6 per cent in Britain). Life expectancy in Cuba is the highest in the Americas and infant mortality rates are some of the lowest in the world (4.3 per 1,000 births, compared with 5.8 in the US) and they have successfully developed vaccinations for 11 diseases.

The achievements of the revolution have taken place under the most relentless attacks from the US — blockade, US-backed invasion and terrorist attacks, assassination attempts on its leadership, subversion and regime change activities — and international solidarity has been, and continues to be, crucial in supporting Cuba’s independence and sovereignty.

I saw first hand the importance of international solidarity.

Our delegation’s visit was covered in the Cuban national press, we were welcomed in every workplace and neighbourhood that we visited, and it meant so much to the Cuban people to know they are not alone — and will never be alone — as long as they have the support of fellow trade unionists and activists around the world.

As one of our Cuban hosts put it: “You can separate governments, but you cannot keep people apart.” The message is a powerful one and was highlighted by the presence of a delegation from the United States, which included activists from the Black Lives Matter movement in Chicago, among other activists from across the US.

This year was the first time that a US delegation joined the brigade, taking advantage of a relaxation of the “people-to-people” travel rules (US citizens still can’t travel freely to Cuba on tourist visas).

However, following Donald Trump’s new Cuba policy announcements last month, which will further strengthen the blockade and tighten travel restrictions, the US delegation to the camp could perhaps be the first and last for the time being.

Visiting Cuba highlighted to me the fact that cuts, austerity and privatisation of public services are active political decisions, not passive inevitabilities. There is an alternative.

Seeing the incredible state provision in Cuba really exposes the injustice of the austerity programme that has been imposed here in Britain and across Europe.

In Britain, one of the richest countries on Earth, working-class students now leave English universities with over £57,000 worth of debt, but in Cuba, a small, developing country under blockade, education is free and inclusive to all.

This is part of the reason that the US has been so fearful of Cuba — the threat of a good example, just 90 miles away. If Cuba can provide universal healthcare why can’t the US? If Cuba can house every citizen why can’t we?

The policy of the blockade was designed to isolate and starve the Cuban people, with the aim to overthrow their popular revolution. It is an imperialist agenda determined to crush any alternative ideology or way of life which puts peoples’ needs before profit.

Travelling to Cuba highlighted to me how important issues of sovereignty and self-determination are for citizens all over the world.

As Raul Castro put it when referring to relations between Cuba and the US during the fifth Community of Latin American and Caribbean States summit: “We can co-operate and coexist in a civilised fashion, respecting differences and promoting all that benefits both countries and peoples, but it cannot be expected that, in order to do so, Cuba should make concessions which are key to its sovereignty and independence.”

The Cuban people want the blockade to end, but not at any price — they will never concede their sovereignty. It is this dignity and resolve in the face of imperialism that is so inspiring. Cuba needs our solidarity in their struggle, not charity.

Gwen Cross is a member of Unite South East. If you are interested in attending the 2018 brigade please get in touch with Ollie Hopkins, campaigns officer for the Cuba Solidarity Campaign: campaigns@cuba -solidarity.org.uk.