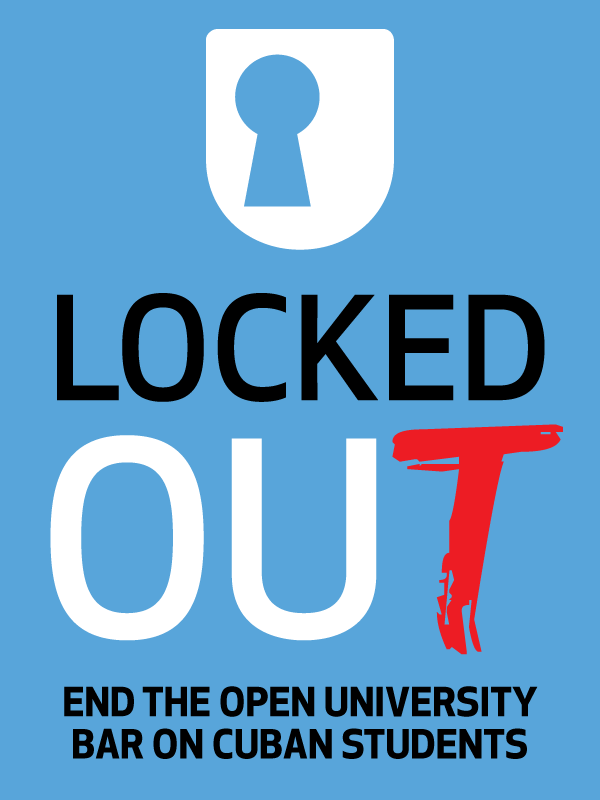 One of Britain’s biggest educational institutions, The Open University, is operating a policy of barring applications from Cuban students due to US blockade laws against Cuba.

The OU says it is operating a “restricted countries” list in its admissions process because it fears it may be fined by the United States Treasury Department if it breaks US blockade laws and allows Cuban students to study there.

Dawn Turpin, OU Acting Assistant Director, confirmed in writing that this policy was to ensure that the OU took “necessary precautions to meet with regulation and protect both itself and its employees. Those steps include the OU not trading with those countries impacted by what is often called US ‘comprehensive’ sanctions and embargoes”.

By barring applications from a group of students based on their Cuban nationality, the OU is breaking anti-discrimination legislation laid down by the 2010 Equality Act.

Catherine West MP has tabled a series of parliamentary questions on the issue and Jo Johnson MP, Minister for Universities has already confirmed that Cuban students already study at many other UK Higher Educations Institutions (HEIs):

“In academic year 2015/16 there were five undergraduate and 25 postgraduate students of Cuban domicile enrolled at UK HEIs.”

The Cuba Solidarity Campaign believes that the Open University’s action is both unethical and illegal under UK law and has called on the British government to intervene in the matter. As well as breaking equalities laws it is also in contravention of the 1996 Protection of Trading Interests Act, which penalises companies and organisations that comply with extraterritorial US blockade of Cuba laws above the UK’s own sovereign laws. In effect the OU is placing US anti Cuban Blockade legislation over and above UK law.

Such cases highlight the global reach of the blockade and its impact on the Cuban people. In June, President Trump further reinforced the US policy by rolling back many of the limited openings for trade with the US that the Obama administration had started. In doing so he has sent a message to international companies and organisations that they can still be penalised for working with Cuba. However, this is the first instance of this impacting on a British educational institution.

In 2007 Hilton Hotels tried to ban Cuban nationals from staying at its hotels citing the same reasons as the OU. However, after a successful campaign by CSC and a coalition of trade unions and parliamentarians the hotel chain backed down.

CSC Director Rob Miller said: “It is unacceptable on every level for a British university to ban an entire group of students based solely on their nationality and runs counter to anti-discrimination and equal opportunity laws. It is an affront to all British people to suggest, as the OU does, that they are only complying with US law. Their action and justification for it punishes the people of Cuba, and undermines the sovereignty of UK law. Cuban students are welcome to study at many other British universities. By introducing this unjust, discriminatory and nasty policy, the Open University is making a mockery of its claim to be “open to all”. We have asked the Open University to end this outrageous ban, and are calling on the British government to make urgent representations to the OU to ensure that they run a fair and non-discriminatory admissions policy, or take action to enforce one if they refuse.”

A CSC briefing including the full correspondence with the Open University and letters sent to the British government is available here http://cuba-solidarity.org.uk/ou/OUBriefingJuly2017.pdf

A brief summary and campaign actions can be found at http://cuba-solidarity.org.uk/ou/