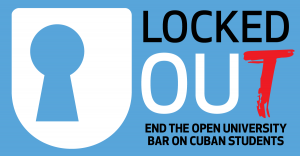 The Open University has been accused of banning Cuban students from attending.

The trade union-backed Cuba Solidarity Campaign, which says the policy is unethical and illegal under UK law, is asking supporters to take action to overturn it.

A spokesperson said: “The Oxford University cites fear of prosecution from United States’ anti-Cuba blockade laws as justification, but by barring applications from a group of students based on their Cuban nationality, they are breaking anti-discrimination legislation laid down by the 2010 Equality Act.

“By complying with the extraterritorial aspects of the blockade, it is also in contravention of legislation which prevents British companies and organisations ignoring UK laws in favour of the US.”

The Cuba Solidarity Campaign has written to the British government calling on them to intervene and force the OU to back down. They have asked them to invoke the powers enshrined in antidote legislation, the ‘Protection of Trading Interests law’ passed in 1996, to protect British interests against any such US bullying.