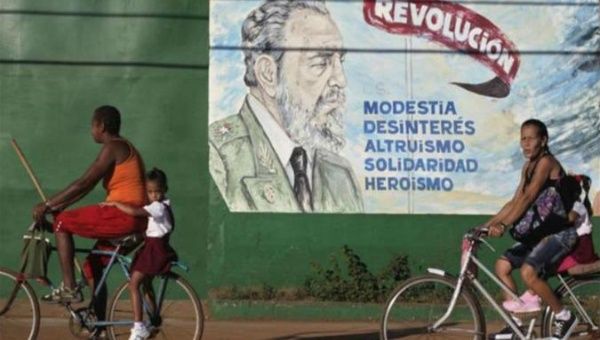 Open University argues that it refuses entry to Cuban students out of fear that it violates the U.S. Treasury Department's blockade legislation.

The Cuba Solidarity Campaign (CSC) in the U.K. has launched a drive to eliminate a policy barring entry applications imposed on Cuban students by the country's Open University.

The ban, applied to Cubans regardless if they are U.K. residents or not, is due to the pressure imposed by the U.S. blockade on the Caribbean island, according to Granma.

The policy was revealed after a Cuban student applied for a doctorate degree at the university in April and was informed that he was refused entry because he was a Cuban national.

Renowned as one of the largest educational institutions in the U.K., Open University claims that its admissions process includes a list of restricted countries that are refused admission. Those applications are refused by the university out of fear that it violates the U.S. Treasury Department's blockade law and will subsequently lead to the university being fined if Cuban students are permitted into their study programs.

Other countries on the restriction list, according to the Telegraph, include Iran, Syrian, and the Democratic People's Republic of Korea.

The solidarity group said that an entry ban based on a student's nationality is in direct violation of U.K. anti-discrimination laws outlined in the 2010 Equality Act.

The policy also contravenes the "Protection of Trading Interests Act," according to which the U.K. government is authorized to penalise companies and organizations that honour the extraterritorial U.S. blockade imposed on Cuba.

In a letter addressed to the Vice Chancellor of the Open University, Sally Hunt who is the General Secretary of the University and College Union expressed concern about the “discriminatory nature of the admissions policy of the Open University, which not only goes against its mission of open access, but also the current practice of other universities, where Cuban students can study careers and postgraduate studies."

Granma reported that the Open University, in effect, puts the anti-Cuban legislation of the U.S. blockade above the law of that European nation. Such cases highlight the global scope of the blockade and its impact on the Cuban people.

CSC director Rob Miller emphasised that “It is a ridiculous situation. You have a British institution overriding U.K. laws on equality to safeguard against U.S. laws. I have spoken to the Cuban Embassy and they are annoyed.” He added that legal advice will be procured if the university doesn't “respond satisfactorily.”

Miller concluded that such a policy “punishes the people of Cuba and undermines the sovereignty of the British law” and by introducing such an “unjust, discriminatory and unpleasant policy, the Open University makes fun of its claim to be 'open to all'.”