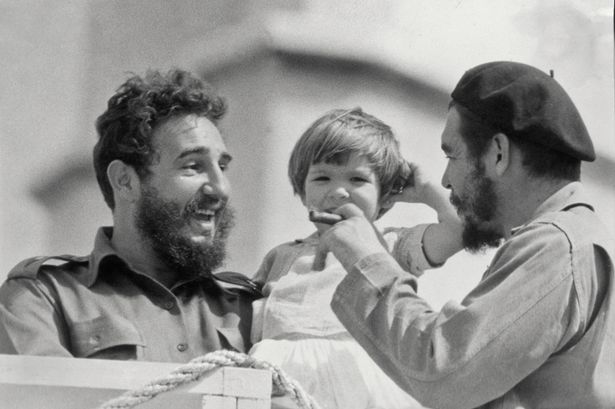 Aleida Guevara with Fidel and Che

HAVANA, Cuba, Aug 4 (ACN) The example of my father always inspires me specially at difficult crossroads such as the one Cuba now faces, said Aleida Guevara March, daughter of the Heroic Guerrilla, Commander Ernesto Che Guevara, to whom the XLI National Day of The Political Song is dedicated.

Guevara March referred to the unbreakable friendship between Che and Fidel, and the coincidence of the ideals of both in a conversation in the Plaza de la Revolución Mariana Grajales, with this event's participants, cultural promoters, troubadours and intellectuals from Guantanamo.

Regarding Venezuela, and to the situation it is now facing, similar to that of Cuba in the early years of the Revolution, the author of the book Chavez, Venezuela and the new Latin America, quoted the Argentine revolutionary when he expressed in his Message to the Tricontinental, In relation to Vietnam:

"It is not a matter of wishing success to the victim of aggression, but of sharing his fate; one must accompany him to his death or to victory"

In the document appearing in a special supplement of the Executive Secretariat of the Organization of Solidarity of the Peoples of Africa, Asia and Latin America (OSPAAAL), the Hero of Santa Clara underlines that: "The solidarity of all progressive forces of the world towards the people of Vietnam today is similar to the bitter irony of the plebeians coaxing on the gladiators in the Roman arena"

Guevara March confessed that she never felt more proud of being the daughter of Che, Cuban, faithful revolutionary, and unconditional devotee of Fidel that on May 14, 2004, "when in the Antimperialist Tribune," like a Cuban I am, "I heard the leader of the Revolution tell the American president George W. Busch: "Hail, Caesar, those who are going to die greet you".