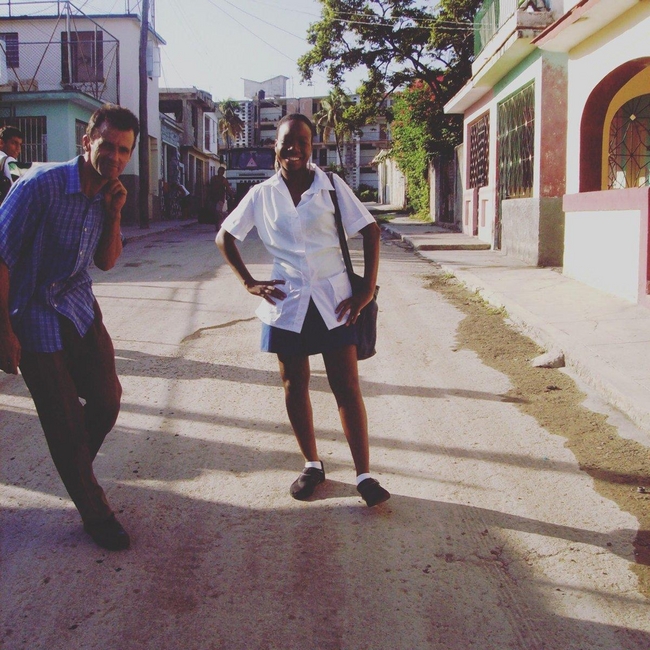 The first sign that Dr. Arabia Mollette is a physician like no other is the absence of the traditional white coat. Depending on the day and her mood, other signs might include neon pink nails and a nose ring.

Then there’s her smile. Warm and inviting, it puts even the most in-distress emergency room visitors at ease.

It’s not uncommon to hear her break into fluent Spanish while treating a patient while working as an ER doc in busy Woodhull Medical and Mental Health Center in Brooklyn.

With her thick and authentic Cuban accent, she sounds like a Caribbean native — a gift from the seven years she spent studying medicine there on a fellowship because she couldn’t afford to attend medical school in the U.S.

Despite her Cuban degree, Dr. Mollette is all-American — born and mostly raised in the Bronx. Even as an 11-year-old in East Tremont, cadging beers off older friends with her cousin to sneak behind buildings and drink away the pain found in their broken homes, the idea of being a doctor was always there, lodged in the back of her mind.

It was her one flicker of hope.

“It never left my head, even though I had no idea how to get there, how to make that dream real,” said Mollette, now 37.

“Like many people, I grew up in a lot of pain, with a lot of depression, but I didn’t recognize it for what it was. It just felt normal to me, coming from a family that suffered from substance abuse, domestic violence and horrible poverty.”

By age 15, she was homeless on the streets, sleeping in parks, running with a dangerous crowd and carrying drugs for dealers and sometimes dealing herself.

Her mother, suffering from mental illness, had tried to kill herself. It was something Mollette considered, too.

“As a child, I had thought about committing suicide. You know the song ‘Black Girl Lost’ by Nas? I felt like that, really a black girl lost, because of all the ongoing trauma and tragedy in my family,” Mollette said. “It just seemed that nobody in the world cared about this lost black girl.”

Her mother, realising she was in no state to parent Mollette, sent the teenager to Peekskill to live with her father, who had just left a rehab facility for drug addiction.

Mollette fell into a romance with a much older man, who eventually began to beat her. She wound up pregnant at 17, trapped in an abusive relationship.

“Like many lost kids, I was looking for love. I’d endured abuse since I was a childhood, physical and sexual assaults. This was what I thought life was,” she said.

On Feb. 19, 1998, her son Jahmeek, who was four months old, was attacked by his father, Artie Holmes. Holmes shook Jahmeek with such force, the infant went into traumatic cardiac arrest and suffered a bruised abdomen, a fractured skill and brain injuries. He died the next day. Holmes, 30 at the time, was sentenced to 22 years in jail.

“The day my son took his last breath, I just sat there and said, ‘This is it,’” said Mollette. “A piece of my soul died that day, and it’s still dead.”

Just shy of 18, Mollette had to be institutionalised for a few days, a period she can’t remember. The months after Jahmeek’s death were a blur. Eventually Mollette — who had turned into an honour student at Peekskill despite the chaos in her personal life — found herself at Pace University.

“I was an alcoholic, I drank all the time. Anything to escape the pain,” she said.

Alone, depressed and not finding relief in therapy, Mollette was expelled from Pace for fighting during her freshman year in 1998.

By 2000, Mollette was ready to try again. She enrolled in Hunter College to get a bachelor’s degree in science and psychology. She found friends who could relate to her traumatic childhood and was finally able to focus on her studies and future career.

But in 2003, violence returned to her life. “One of my sisters was shot and killed in Schenectady,” Mollette said.

It brought all her painful experiences flooding back. This time, however, Mollette was determined to avoid alcohol and seek out therapy — and the entire family went with her. Individually and together, they started to heal.

“Sometimes you don’t make it on that first try, maybe not even the second, third or fourth time, and that’s okay. Maybe it’ll be the next time when it will all come together. You never know, so you just keep trying,” she said.

By 2006, Mollette had her bachelor’s degree, a host of pre-med prerequisites completed at Westchester Community College, and a graduate degree in biomedical science from SUNY Binghamton. The dream to be a doctor was as strong as ever. But there was no way to pay for it.

“I really had no idea what I was going to do next,” she said. “I don’t even know if I would have qualified for a loan to go to medical school. I couldn’t even afford to pay to take the medical college admission tests."

Through a friend, she heard of a unique scholarship Cuba offered to low-income students from other countries to the Latin American School of Medicine (ELAM) Fidel Castro had partnered with the Congressional Black Caucus in 2000 to include American students. The only condition imposed in exchange for a full seven-year ride was that graduates return to their communities and help the underserved.

Mollette applied through The Inter-religious Foundation for Community Organisation in Harlem, the sole U.S. facilitator of the program since 2001.

“I had no idea what I was signing up for,” Dr. Mollette said. “I spoke no Spanish, and everything is taught in Spanish. You have to get your medical degree in Spanish. I lived like a Cuban, with a Cuban family, and we got to experience it all — blackouts, food shortages — but all the wonderful things about Cuba, too.”

It took about three months to get a decent grasp of the language, but the training was real from the minute she got there, Mollette said.

“In Cuba, you may not have the best or the latest equipment, but you are getting hands-on experience. You are talking and diagnosing and interacting with patients from day one — and there is so much emphasis put on learning how to talk to patients and hearing what they say,” she said.

Mollette and other U.S. students also had to worry about getting arrested on visits home under the administration of then-president George Bush. "He wanted to have us put in jail, but thanks to Congresswoman Maxine Waters, they put a stop to that," said Mollette. "She and California Congresswoman Barbara Lee did a lot for us, and made sure our medical licences would be recognised in the U.S."

Upon returning to New York in 2012, Mollette completed her emergency medicine residency at Newark Beth Israel Medical Center in Newark. Now she's an ER doctor at Woodhull Hospital and will soon be adding Coney Island Hospital to her résumé. She also treats patients on Long Island a few days a week, and goes to Kenya every year to teach emergency medicine.

When she dashes into the ER, usually wearing scrubs and comfortable black fleece jacket, all high-energy and big smiles, none of her personal trauma is visible. But Mollette has grown comfortable unpacking parts of her story, because she’s found it to be a potent medicine.

“A lot of patients come in and they’ll say, ‘You’re a doctor, you can’t know about what I’m experiencing,’ and I’ll tell them a bit about myself, and a lot of times that really makes a connection. The only difference often between them and me is that I have a degree,” she said.
It also helps patients to be honest with her, she said.

“A lot of people are ashamed of their situations, be it teen pregnancy, assault, substance abuse, whatever. I’m here to say to them that I have lived all of that, and it’s not the sum total of who you are, of your greatness as a person," said Mollette, who does a regular podcast online dedicated to informing historically underserved communities about medical options and treatments.

And a few other childhood dreams have come true for Dr. Mollette. Her father has been drug-free for 25 years and got his masters in education. He’s a teacher in the city. Mollette’s mother is doing well and works as a medical assistant.