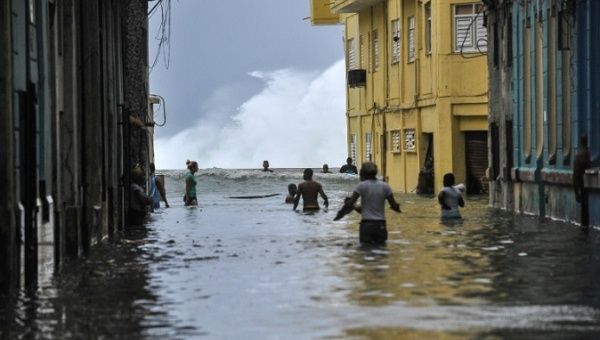 CUBA solidarity campaigners have launched a major appeal fund for those affected by the devastation of Hurricane Irma.

Speaking exclusively to the Star, Cuban ambassador Teresita Vicente described the damage of the category-five storm and voiced her concerns about the Caribbean island’s recovery amid the US’s illegal blockade.

She called for urgent support to bolster the relief effort, stressing that “solidarity is very important for the Cuban people, especially over the coming months.” Ms Vicente said that Hurricane Irma had devastated most of the provinces in Cuba.

“The economic effects of the hurricane are destroying most of the agriculture, banana plantations, sugar plantations but also electricity lines and power stations.

“The blockade makes it more difficult to recover but the spirit of the Cuban people is the same as it has been when we face many adversities.”

Ten people were killed when Hurricane Irma whirled past Cuba over the weekend, flooding the capital Havana and causing power outages.

The ambassador warned that Cuba is also suffering from “Hurricane Trump” as the US increases its “aggressive policy” toward the country.

While the island was being smashed by waves up to 11m high, US President Donald Trump announced the extension of the trade embargo against Cuba for another year.

This follows his decision in June to roll back most of the Obama administration’s policies that had partially opened up US trade with Cuba.

“That is why the international solidarity movement is so important,” she added. “The freedom of the Miami Five happened because of the resilience of the Cuban people but also the solidarity of the trade unions, particularly those in Britain.”

Despite being hit badly by the storm, Ms Vincent explained that Cuba has sent a brigade of 750 medics to its neighbouring Caribbean islands which were also pummelled by hurricanes.
And the Cuban government — along with Venezuela — has also offered to help with hurricane relief efforts in the US.

“We offered support to the US during Hurricane Katrina but they rejected it,” she said.
“Political solidarity is very important but also this appeal is vital and will help to alleviate the difficulties faced by the Cuban people.”

You can donate to the Hurricane Irma Appeal online here