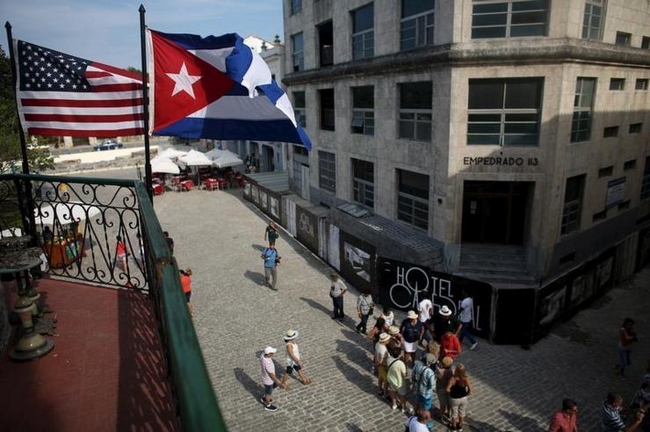 HAVANA (Reuters) - Cuba on Tuesday slammed U.S. President Donald Trump’s latest comments about the island as “disrespectful, unacceptable and meddling,” while reiterating it was not involved in the alleged incidents that had harmed U.S. diplomats in Havana.

The sharply worded Foreign Ministry statement came after U.S. and Cuban delegations met in Washington to discuss bilateral relations, the first such high-level meeting between the Cold War foes since Trump took office in January.

Their meeting took place on the same day Trump addressed the United Nations General Assembly in New York, calling Cuba “corrupt and destabilizing.” He also said he would not lift the U.S. trade embargo on Cuba until it made “fundamental reforms.”

Cuba said it had voiced “strong protest” against his comments, as well against his new policy toward the Communist-run nation. The Republican president announced in June a partial rollback of the U.S.-Cuban detente forged by his Democratic predecessor, Barack Obama.

“In the wake of the disrespectful, unacceptable and meddling statements made by President Donald Trump in his address to the U.N. General Assembly at a time when the U.S.-Cuba Bilateral Commission was sitting in session, the Cuban delegation voiced a strong protest,” the Foreign Ministry statement said.

U.S.-Cuban relations have become especially strained since the State Department said last month its personnel in Havana had experienced physical symptoms from what it could only describe as “incidents.”

The symptoms ranged from hearing loss to mild brain injury, a State Department official said last week, adding that the toll of victims had risen to 21 people linked to the U.S. Embassy. Several Canadians were also affected.

Cuba has denied any involvement and the United States has not blamed it, although Secretary of State Rex Tillerson said on Sunday it could close its embassy in response.

“The Cuban authorities have shown keen interest in both clarifying this matter.”